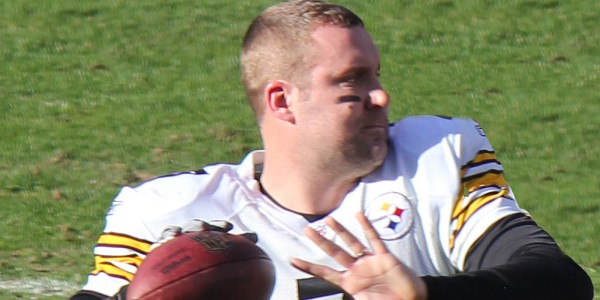 After the NFL unveiled the remaining spots in their Top 100 Players of 2014, it was revealed that Steelers QB Ben Roethlisberger ranked 31st overall. The list, which is voted on by players,  has seven quarterbacks placed higher than Big Ben.

Are there 7 players who are better than Roethlisberger? We examine those who placed ahead of him to find out.

Without a doubt, the cream of the crop, not only among QB’s, but NFL players overall. Manning placed #1 overall on the list, and with good reason: the NFL’s premier signal caller rewrote history in 2013, shattering previous passing records with 5,477 yards and a 55 touchdowns. Few would argue his status as not only the best of the year, but one of the greatest players of all time.

The next two vote-getters routinely battle each other for passing yard and touchdown records. Each are equally valuable to their franchise’s success and are certain to be future Hall of Famers in their own right.

Brady had another tremendous season, topping 4,000 yards, but had his lowest number of touchdown passes and lowest quarterback rating in six seasons. Brees topped 5,000 yards for his 3rd consecutive season and was 1 TD shy of recording at least 40 passing touchdowns during the same span. In short, both players were stellar.

Also considered an “elite” QB, Rodgers was missing in action for a good portion of 2013 after suffering a collarbone injury that would cost him to miss 7 games. Rodgers returned for the final game of the regular season, leading the Packers to victory in a do-or-die contest against the Chicago Bears; the Packers simultaneously won the division while jettisoning the Bears from playoff contention.

Despite only playing 9 games, Rodgers threw for over 2,500 yards and maintained a 104.9 QB rating.

The next two names on the list are oddly similar in both experience and style, recognized as more as mobile, than gun-slinging quarterbacks in their young careers.

While the preceding players on the list routinely throw for over 4,000 yards, Wilson and Newton play on teams known more for their ground attack. Neither QB is utilized heavily in their team’s passing game: each QB threw for an average of 209.8 and 211.2 yards per game, good for 27th and 28th in the league respectively. Their touchdown totals were much better, with Wilson 9th and Newton 12th overall.

While neither QB is distinguished by throwing for three or four hundred yards per game, each player lead their team to the top two seeds in the NFC. Wilson one-upped Newton, leading his team to a victory in the Super Bowl, which is the ultimate trump card in such discussions among the league’s “best.”

The final quarterback ranked ahead of Roethlisberger, Luck has lead his Colts to the playoffs in both of his seasons in the NFL, including his first post-season win in 2013. In spite of his team’s success, Luck failed to match the 4,374 yards he threw for as a rookie, but managed to improve his QB rating by matching his previous touchdowns at 23 and throwing less than 10 interceptions in 2013.

Of the quarterbacks ahead of him on the list, Ben boasted impressive numbers in 2013, throwing for 4,261 yards and 28 touchdowns (good for 9th and 7th in the league.) His 92.0 QB rating was also good for 9th best in the league.

The official NFL Top 100 list had this to say about Roethlisberger:

Ben Roethilsberger continues to be one of the most underappreciated quarterbacks in the NFL today. He’s rarely mentioned among the elite quarterbacks, but he’s one of the rare current quarterbacks with three Super Bowl appearances and two Super Bowl wins during his career.

It’s hard to argue Ben’s success, as he’s only one of six active quarterbacks with a Super Bowl ring. He’s also only one of three who has more than one ring. This begs the question: does Big Ben deserve a higher ranking?

Here are the numbers for the top QBs from the NFL Top 100 list:

Manning’s and Brees’ numbers are off the chart as usual.

Arguably, Tom Brady and Aaron Rodgers were rewarded for past seasons. Brady’s numbers, while respectable, were no better than Roethlisberger’s, with Brady gaining slightly more yards, but throwing for 3 less TD’s and having a lower QB rating. Likewise, Rodgers ranked higher in the Top 100 based on only 9 games: it’s likely, but debatable, that his numbers would’ve been outstanding over a full season.

Russell Wilson won a Super Bowl protecting the ball in the air, but dropping it on the ground more times than Ben; something the Pittsburgh QB is regularly criticized of doing! (Ben fumbled 6 times, the same amount as Brady and Brees.)

Of the 8 quarterbacks listed, Roethlisberger ranks 4th in yards, 3rd in touchdowns and 5th in QB rating, while tossing the most interceptions. The top three signal-callers had more completions, but also threw for far more attempts.

One lone statistic hints at why Ben is ranked lower than his peers: he is the first QB on the list from a team that failed to reach the playoffs in 2013. In this regard, his 8th overall ranking is not entirely justified; a list of individual players should be based on individual, not team, performances.

Therefore, Big Ben is deserving of moving up the list a few more spots.