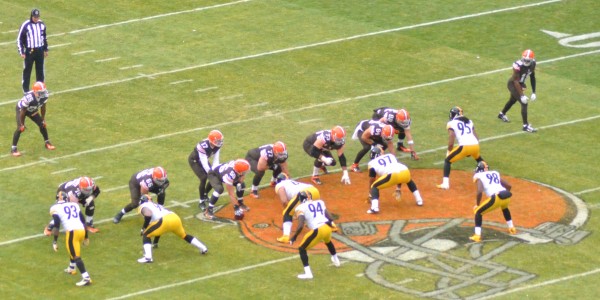 Ten Numbers You Need To Know

Oh how we love statistics! Despite the biggest number being 8 wins and 8 losses, here are 10 numbers from last season, which provide a bright outlook for 2014:

The number of snaps taken by backup quarterbacks Bruce Gradkowski and Landry Jones in 2013. This is only the second time in Ben Roethlisberger’s career that he has started, and played in, all 16 games of the regular season.

The number of times Ben Roethlisberger was sacked in the final 7 games; an average of 1 per game. Over the final stretch, this was an improvement of almost 3 less sacks per game. (Ben was sacked a total of 35 times in the previous 9 games.)

The number of interceptions thrown by Roethlisberger over the duration of those final 7 games. The number correlates with less hurry-ups, pressures, and as shown above, sacks, in the final stretch of the season.

The number of sacks recorded by Jason Worilds last season. For years considered a bust, Worilds finally received ample playing time and parlayed his opportunity into a breakout season.

Is the average age of the Steelers defense on opening day, a stark contrast to 30.1 at the same time in 2012. The numbers are further skewed by Ike Taylor (34) and Troy Polamalu (33.) Furthermore, only 1 defensive lineman is older than 25 and all of the outside linebackers are under age 26. (Someone notify Warren Sapp that the only thing old now, is his material!)

The number of fumbles forced by Troy Polamalu, the highest of his career. Showing no signs of slowing down, Troy also played in all 16 games this past season.

The number of total scrimmage yards gained by Le’Veon Bell last season; the highest of any rookie in team history. (Even Franco Harris!)

The number of receptions by Bell; more than any Steelers’ back in the last 19 years.

The number of games Antonio Brown had at least 1 reception in; an NFL record.

The total number of touchdowns Emmanuel Sanders and Jerricho Cotchery scored two seasons ago. Both depart the team, taking 16 touchdowns from 2013 with them.

For all of the concern in losing these two receivers, the Steelers always find a way to make up for the production. Pittsburgh scored 27 team touchdowns in 2012, when Mike Wallace lead the way with 8. Last year, Wallace’s replacement, Antonio Brown, filled in nicely, scoring 8 as the team went on to score 28 total touchdowns: 1 more than the previous year, and in a season where pessimists were concerned the team didn’t have any “weapons” surrounding Ben Roethlisberger.

Call me an optimist, but based on these numbers, I do believe the 2014 Pittsburgh Steelers will do just fine.