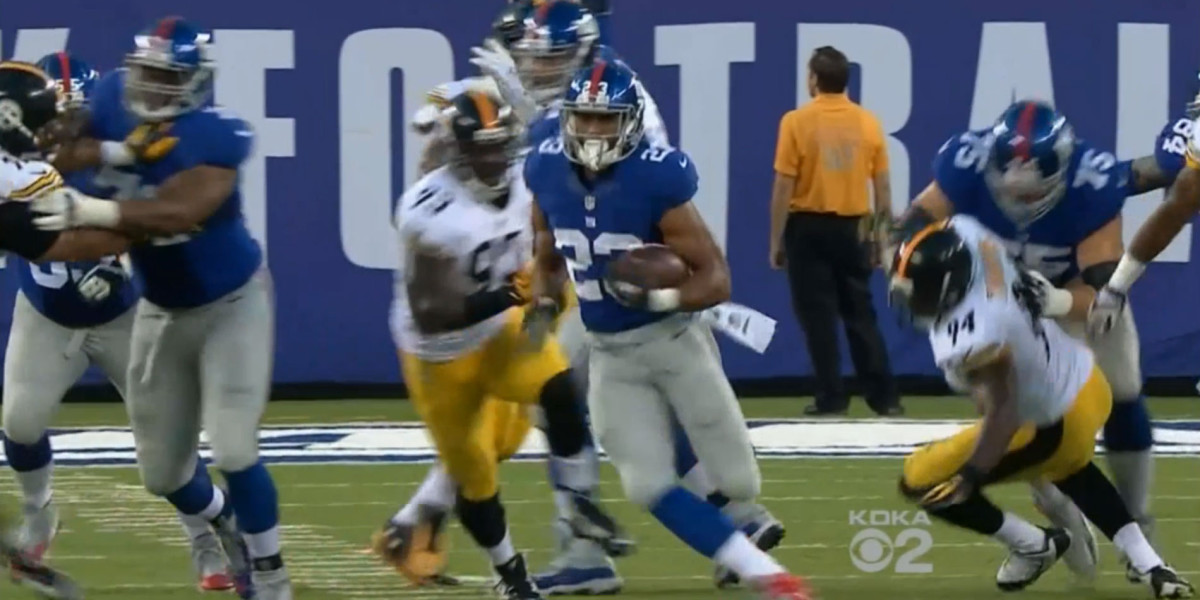 Like any other preseason opening game of the past, there were bumps and bruises, and things weren’t always pretty. Here are a handful of things we liked and disliked in the Steelers first game of 2014 against the Giants:

Like. BIG LIKE. After taking the field for the first time in 2 years, following a gruesome knee injury many felt he wouldn’t return from, Spence started in place of first round draft choice Ryan Shazier. Spence looked fast and made several terrific plays, including the first unassisted tackle of the game and a QB pressure that caused Eli Manning to hurry and throw an incomplete pass on third down.

Like. The flash we wanted to see in this opening game came when Jones shot into the back field and sacked Eli Manning. He too showed the speed the Steelers are looking for, and reminded everyone why he was the Steelers’ top choice in last season’s draft.

Dislike. The 73-yard run against most of the first team’s defense made everyone’s minds revert back to big plays given up by the team last season. Mike Tomlin attributed the fault to “gap integrity” and Cameron Heyward took the blame, though the head coach also mentioned he would’ve liked to have seen his defensive to turn those into shorter yard gains.

Mostly dislike. Bruce Gradkowski appeared way off with many passes overthrown, behind receivers and some that could’ve been picked. Despite a fumble, Landry Jones fared a bit better, with some of his passes late in arriving, with his incompletions (and potential turnovers) due to receiver tips and drops.

Love. How exciting is it to see this guy get the ball? The 46 yard reception showed us what he and the Steelers will be capable of. In the huddle, the team had a 21 personnel (2 RBs, 1 TE, 2 WRs) with Bell, Archer and Miller all playing at the line of scrimmage and leaving an empty back field. It’s anyone’s guess as to who will get the ball in these situations, as Bell himself was used in the slot last season, and had a 19 year high for running backs with 45 receptions.

Dislike. An underwhelming first showing for Bryant, who was involved in two pass interference tie-ups, a tipped passed that was nearly intercepted and a fumble on a punt return. With the two PI calls, it’s debatable if Bryant could’ve gotten the ball or not; I’ll give him the benefit of the doubt in regard to trying as hard as he could to try and make the reception, as this is what will earn him snaps and separate him from the rest of the receiving corps.

Like. The other receiver with a lot of hype behind him through camp is Brown. His hands looked like glue and he got significant reps throughout the game. I particularly liked his situational awareness in recovering Landry Jones’ fumble in the final minutes of the game. You could see him involved everywhere.

Like. Blake was a blanket in the secondary and provides much needed depth at a position criticized for having none.

Like. The undrafted Division 2 freak-of-nature improved his stock to make the team by forcing two fumbles and being named the Steelers player of the week.

Like. The defense laid the wood with several pops by Mike Mitchell, Shamarko Thomas and rookie Jordan Zumwalt. Could this be a small preview of things to come?

Push. While the final outcome was a loss, the score isn’t the determining factor of success in preseason contests. The Steelers were plus 1 in the turnover battle, and only penalized 5 times for 34 yards: both could be considered positives in what are typically ugly games to kickoff the preseason.

As noted early, some sloppy QB play left the Steeler empty-handed in the redzone, and 2-for-14 on 3rd down: numbers that will need to be improved upon come time for the regular season.