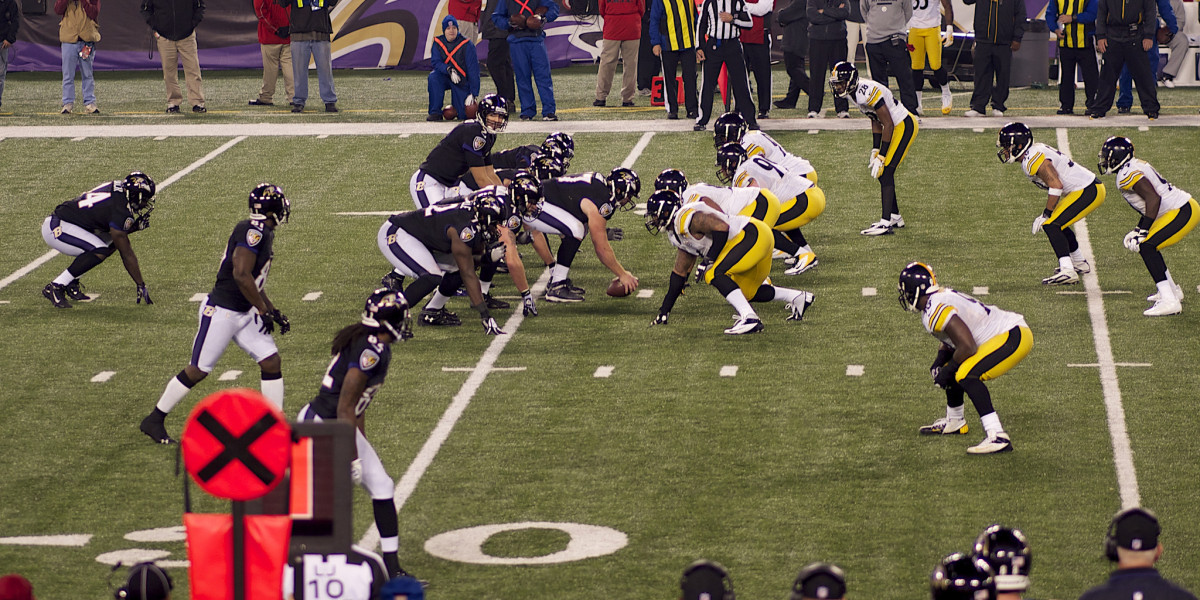 Thursday Night Football returns to NFL Network and debuts on CBS with what many consider the top rivalry in the league, when the Pittsburgh Steelers travel to Baltimore to take on their division opponent Ravens.

We previously outlined some key numbers in this series, which has been tight since it’s inception, but even more so over the last few seasons. Both squads were held without a 300 yard passer or 100 yard rusher in last year’s series. The kickers have combined for 12 field goals in those two games. Each of those statistics backs up an average 2.5 points of margin of victory last year.

Both teams enter the short week after disappointing performances in their first game, the difference being the Steelers held off a Browns comeback to secure a 1-0 record, while the Ravens lost to division opponent Cincinnati. The Ravens will be fighting tooth-and-nail to not start the season 0-2 in both overall record and the division, which would certainly darken any hope of returning to the playoffs this season.

All indications point to a tight game, but will it be a defensive battle? The Steelers staved off any big plays which were a trademark of the start to 2013, but those same big plays were at home in the Ravens/Bengals match up. Cincy’s AJ Green and Baltimore’s Steve Smith both had 75+ yard touchdown receptions, suggesting the Ravens can make and give up big pass plays.

The Steelers are also capable of generating big plays. Ben Roethlisberger broke free of the pocket and found Antonio Brown for a 35 yard TD against Cleveland. More impressive is that Brown broke free of one of the NFL’s best corners in Joe Haden. Baltimore, who held Brown to no scores last year, could be without starting CB Lardarius Webb, who started all 16 games for the team last season, but missed the Bengals game with a back injury.

Baltimore will need Webb, as the Steelers nearly had 2 100 yard receiving performances against Cleveland, as Antonio Brown hung 116 yards on them while 2nd year WR Markus Wheaton emerged with 97 yards of his own.

However, the passing game will not be the only focus, as both teams were previously stout against the run. Unless you’ve been living under a rock, you already know the Ravens will no longer have the services of former star RB Ray Rice, who has been suspended indefinitely by the league. Rice’s heir apparent, Bernard Pierce, was benched in the Bengals game last weekend and replaced with Justin Forsett, who answered the call to action with 70 yards on 11 carries and a touchdown. All indications point to Forsett seeing the lion’s share of carries Thursday night.

On the other side of the field, the Steelers have several weapons in their backfield. Le’Veon Bell ran for 109 yards and a score while adding another 88 yards on 6 catches. The 2nd year player nearly had 1500 all purpose yards last season and could be on pace to shatter those numbers this season. Baltimore, however, held a similarly gifted runner, Bengals RB Giovani Bernard, to only 48 yards and a total of 79 team rushing yards. But Bernard also played a large role in Cincinnati’s 301 passing yards, netting 62 on 6 receptions.

Bell will need a similar performance, but isn’t alone in the backfield: LeGarrette Blount was also targeted in Pittsburgh’s passing game, and had a red zone carry in which he rumbled through Browns defenders and into the endzone for his first touchdown of the season. Speedy rookie Dri Archer only had 1 carry, but remains a threat whenever he lines up on the field, but his availability is still undetermined for Thursday, officially listed as questionable with an knee/ankle injury.

The Steelers may also be without the services of WR Lance Moore, who did not participate in the team’s home opener. Other injuries reported include DT Steve McLendon (probable, stinger) S Shamarko Thomas (probable, achilles/ankle) and WR Martavis Bryant, who also sat out the opener with a shoulder injury.

Update: Moore and Archer have been ruled out for the game.

With most of the core units healthy on Pittsburgh’s side of the ball, the area of concern shifts from offense to defense, where the Cleveland Browns gained 389 total yards and closed a 27-3 lead with 24 unanswered points in the second half of the game. The Ravens similarly pushed back at the Bengals after halftime of their game, and out gained Cincinnati with 420 total yards. The Ravens also had 26 first downs to Cleveland’s 23, and 345 passing yards to Cleveland’s 230.

The Steelers defense will need to hold down the fort and force Baltimore to do something they couldn’t get Cleveland to: turn the ball over. The Ravens gave the ball up twice against the Bengals, and turnovers could be the key deciding factor in this game.

Another key will be penalties. The Steelers were penalized 11 times for 96 yards last week, while the Ravens were only flagged 3 times for a total of 29 yards. A lopsided number in this column could be as equally damaging as the turnover ratio, if it provides Baltimore the opportunity for favorable field position or allow their offense to remain on the field for an extended period of time.

The last x-factor in this game will be special teams. The memory of Mike Tomlin impeding the progress of Ravens returner Jacoby Jones is still fresh in the minds of Baltimore fans. Many Ravens felt Jones would’ve scored and sealed the game’s fate. They could be right, but we’ll never know. However, in the other color jerseys is Antonio Brown, who the Ravens intentionally kicked away from last season: Brown had one lone return in the two games between them.

Regardless of the outcome, the prime time spotlight is once again upon these teams. If history is any sign, we’re in for another nail biter tomorrow night. Here’s to the Steelers starting the season 2-0 while putting their rival at an extreme disadvantage for the remainder of the season.