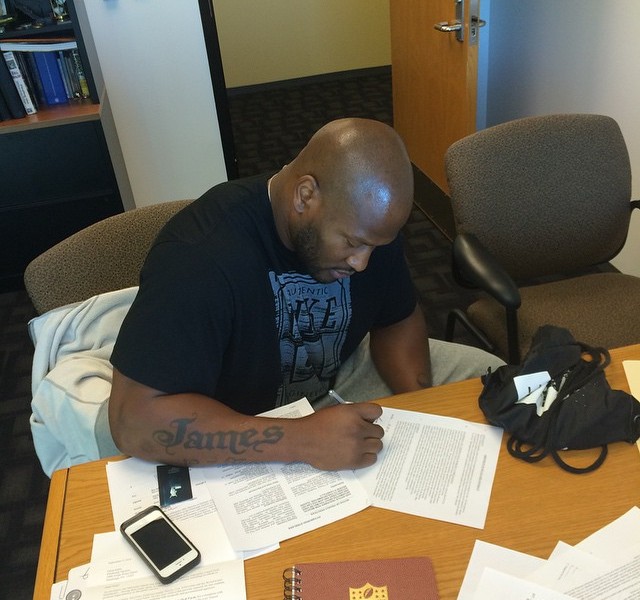 It was less than a month ago that James Harrison announced his retirement. A press conference was held and the former NFL Defensive Player of the Year officially retired as a Pittsburgh Steeler.

Less than 24 hours after the Steelers starting OLB Jarvis Jones fell to a wrist injury, the rumor mill immediately started churning out reports of Harrison’s return to football.

There were doubts, but fans had been clamouring to give Harrison a second chance, after he left the Steelers last season for a not-so-impressive stint with the Cincinnati Bengals. The team had given another look at DE Brett Keisel, another aging defensive star who many felt still had something left in the tank.

So why not Harrison?

The “Steelers West” (or as the NFL calls them, Arizona Cardinals) picked up the phone and were ready to try Harrison out in August, days before “Debo” decided to call it quits. The Cardinals made a similar inquiry for Keisel, which apparently forced the Steelers hand in signing the DE. Many felt the same patter was occurring, as current Arizona head coach (and former Steeler offensive coordinator) Bruce Arians, along with Arizona’s previous head coach (and former Steeler offensive coordinator) Ken Whisenhunt, had brought several former Pittsburgh players to the desert. However, Harrison would not follow in the steps of Jonathan Dwyer, Larry Foote or Brett Keisel: he would not sign with any team and instead hung up his pads to spend time with his children.

Fast forward a few weeks. Jarvis Jones gets injured. A vacancy is open, and with little free agent options available, a name synonymous with the Steelers defense is lying in wait. At first it seemed like nothing but a good rumor… until Harrison posted a video on his Instagram account, titled “I’ll give it one more year!” and asking his young boy if he’s like to see his father play football again. Harrison’s son gave the same answer as Steeler Nation: a resounding yes!

Now that the question of Harrison returning to the Steelers is answered, there are other questions that will need addressed. What exactly does James Harrison offer a team that was willing to move on from him a year before?

First, let’s be frank: I would be surprised if Harrison were a starter, or even a major contributor. Harrison’s workout ethic is well documented and I’m sure he’s kept himself in prime physical shape, however this differs from football shape. My doubts lie in how many snaps Harrison will play, not how he will play them.

Let’s make no mistake: the Steelers were already thin on OLB before Jones went down. This is similar to last season, where ILB was a problem area for the team. Undrafted Kion Wilson and 6th round rookie Vince Williams were left covering for Larry Foote, when Foote was lost for the season in the middle of kickoff weekend.

This season, the team addressed depth at the inside position, with a combination of Sean Spence and Vince Williams offer a “next man up” option. The defense has the same option with free agent Arthur Moats, who will likely fill in where Jones left off. Moats did just that on Sunday Night, registering a sack and 3 solo tackles in very limited duty.

The problem lies in depth after Moats, of which there is none. With Jones placed on the IR with designation to return, should Moats or Worilds succumb to injury, the team would be left grasping at straws. Former 5th round pick Chris Carter was cut before the regular season, and subsequently signed with the Colts. Undrafted preseason phenom Howard Jones, who currently resides on the practice squad, is their only other option.

HoJo is still learning the ropes of a Dick LeBeau defense that James Harrison is already familiar with. Thus signing Harrison made the most sense for the team, giving them a reliable veteran who understands the system so well, he was selected to 5 Pro Bowls during his Pittsburgh tenure.

If Harrison can help the team make up a Jones’ contribution to the defense, he could put the cherry on top of the cake that is his career. When “Debo” last played with the Steelers in 2012, he accounted for 6 sacks and 49 tackles. He took a dip in production last season with the Bengals, though concerns should be alleviated by his lack of playing time, and moving to a 4-3 defensive scheme (Harrison still registered 2 sacks in only 10 starts with Cincinnati; Jarvis Jones accounted for 1 sack in 8 games last season.)

The comparisons will still be made as to whether Harrison still has “it” or if he’s a shell of his former self. As Post Gazette writer Ed Bouchette points out:

If Harrison is more of the former and not the latter, we could be in for a big surprise.