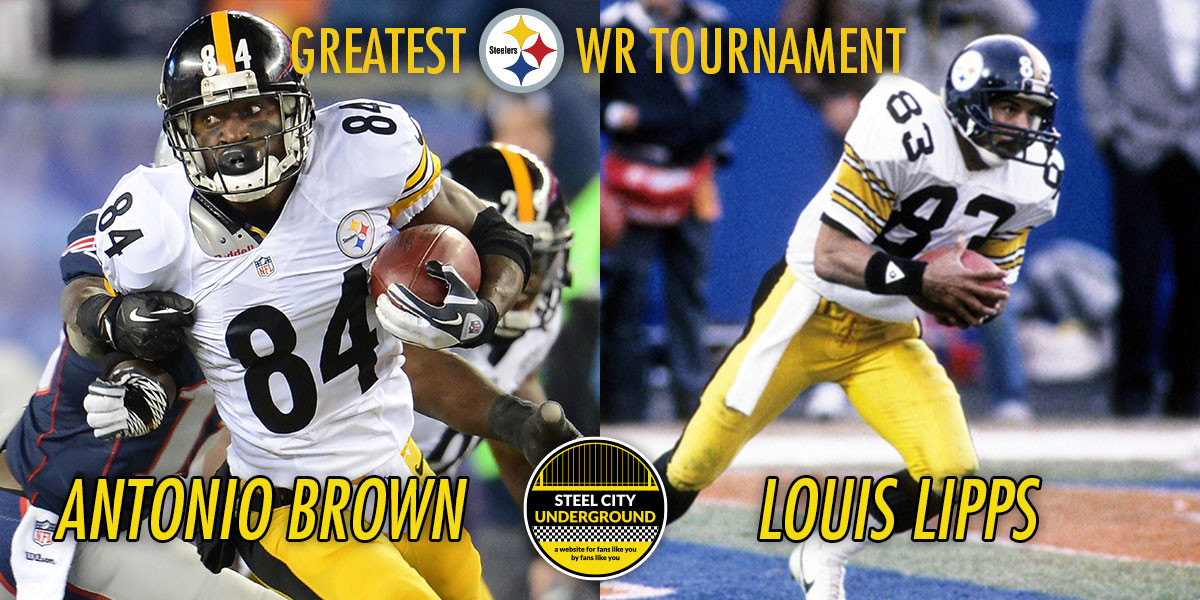 In his first season, Lipps broke the NFL record for punt return yardage by a rookie with 656 yards. Louis returned one punt for a touchdown and also caught 45 passes for 860 receiving yards and 9 receiving touchdowns. He was named the NFL’s Offensive Rookie of the Year at season’s end and was also named to the AFC Pro Bowl team for that year.

Lipps’ second season in 1985 saw him go over 1000 receiving yards and 50 rushing yards with 1134 and catch 12 touchdowns. He was named 1st Team All-Pro by the Newspaper Enterprise Association (NEA) and the Pro Football Writers Association (PFWA) and 2nd Team All-Pro by the Associated Press (AP). He also earned a second straight trip to the Pro Bowl.

The Steelers named him the Team’s MVP for the 1985 season. Lipps struggled with injuries during the 1986 and 1987 seasons but rebounded in 1988, finishing with 50 catches for 973 receiving yards and 5 touchdown catches including the Steel City Wonder, where he caught a ball in his facemask and scored. In 1989, Lipps again led the team in receptions (50), receiving yards (944) and receiving touchdowns (5) and was named Team MVP for the second time.

On December 4, 2011, Brown returned his first punt return for a touchdown against the Bengals, and was also named AFC Special Teams Player of the Week. In 2011, Brown became the first player in NFL history to have more than 1,000 yards receiving and returning in the same year. For his efforts, Brown was selected as a punt returner for the Pro Bowl.

On December 22, 2013, Brown broke Yancey Thigpen’s team record of 1,398 receiving yards set in 1997. Brown also became only the second Steeler to amass at least 100 receptions in a season, joining former teammate Hines Ward. On December 29, he, along with Pierre Garçon of the Washington Redskins, tied Jimmy Smith as the only players to record at least five receptions in every single game of an NFL season in a win against the Browns, all while becoming the only receiver in NFL history to ever record five receptions for at least 50 yards in every single game of an NFL season. On December 27, 2013, Brown was selected for the Pro Bowl as a receiver and a punt returner. On January 3, 2014, Brown was named to the AP All-Pro team for the first time in his career.

In 2014 Brown led the NFL in receptions, yardage, and was tied for second in touchdowns. Brown has extended his record of recording 5 catches for 50 yards to 32 consecutive regular season games. Browns’ 2014 campaign saw him best his franchise-record yardage mark of 1,499 yards by gaining 1,698 yards on 129 catches, the highest total of catches in Steelers’ history and second in NFL history, to go with a franchise-record 13 receiving touchdowns.