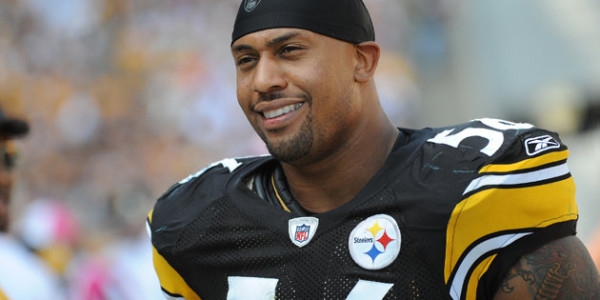 How LaMarr Woodley Screwed Up The Steelers

The title might be a bit misleading, as LaMarr Woodley did a lot of good for the Steelers too. However, this article is mainly focused on how the 2015 Steelers are still recovering from the downfall of one player.

LaMarr Woodley came into the league as a 2nd round draft pick in 2007 and almost instantly caught fire with the Steelers defense. Sliding over from his DE position at the University of Michigan to OLB, Woodley combined with James Harrison as a formidable pass rushing duo coming off the edge.

Woodley would appear in 13 games his rookie year, but with no starts. That would change in 2008, his 2nd season in the league, where Woodley would then start in all 15 games he dressed for. In 2009 and 2010, he would start in all 16 games, with 2010 being the year the Steelers last appeared in the Super Bowl.

Looking back at that Super Bowl roster, it was evident the team would have to make plans for the future. For years the defensive line was anchored by perennial Pro Bowlers such as Aaron Smith and Casey Hampton. 2010 became the middle year of Smith’s decline, in particular, as he only only appeared in 6 games — the most of his 3 year injury stretch (Smith would appear in 5 games in 2009 and then 4 games in 2011 before retiring from football.)

The team invested a first round draft pick in 2009 on Evander Hood, to add depth and get a potential replacement in the rotation for Smith, who had been playing in the league for 10 years. Similar moves were made earlier this decade with drafting Jason Worilds, Alameda Ta’amu, Keenan Lewis, Cortez Allen and others.

The youth movement was planned for, but there must always be room for error when dealing with the uncertainty of how drafted players will pan out. This is where I feel Woodley was the component the Steelers couldn’t get wrong. With their focus on other positions, Woodley was meant to be the standard bearer for years to come.

And that’s certainly how the Steelers treated him before the start of the 2011 season.

In February of 2011, the Steelers (who were then defending AFC champions) franchise tagged Woodley. The tag would cost $10 million and also placed Pittsburgh the same $10 million over the salary cap, before the start of training camp that year.

The team would work with Woodley on a long-term deal. In August of that same year, the team would sign him to a 6-year, $61.5 million contract. The deal made Woodley one of the highest paid outside linebackers in the NFL. No one questioned this decison, as Woodley had at least 10 sacks in his previous 3 seasons: his 13.5 sacks in 2009 was third best in the league and earned him a trip to the Pro Bowl. He was a player on the rise. Potentially another in a long line of great Steeler linebackers. The deal was also structured to help reduce the team’s cap situation, spreading the money over the length of the contract. That contract would have Woodley with the team through the 2016 season.

It appeared to be a win-win situation for the team and the player. However, it wasn’t meant to be.

After appearing in 47 games in his first 3 years as a starter, Woodley would only appear in 34 games in the next 3 years. His previous sack totals of 11.5, 13.5 and 10.0 in those first 3 years were followed by totals of 9.0, 4.0 and 5.0: that’s almost half of what the Steelers were banking on the linebacker when they made him one of the richest players in franchise history.

So why is Woodley the target of scrutiny here? The unfortunate side effect to Woodley’s inability to stay on the field was retaining other defensive players who were brought in to be the future of the team.

For example, the emergence of fellow OLB Jason Worilds, who was put into a position to perform after Woodley’s injuries. While critics have their opinion on Worilds performance, the rest of the league placed a price tag on the pass rusher, thus the team would be forced with a do or die situation: keep Woodley or keep Worilds? They could not keep both, due to the amount of money both would command.

This also put the Steelers in a pickle with trying to retain the services of CB Keenan Lewis, who would also leave the Steelers for the New Orleans Saints in 2013. The team’s cap situation was in dire straits, part of the strain being Woodley’s large contract, and Lewis was allowed to enter free agency. Speaking of which, you could also forget about trying to sign free agents, as the franchise struggled with cap woes which lead to restructuring several players contracts, including Heath Miller and Troy Polamalu, again, mortgaging the the future for the present.

And that’s how LaMarr Woodley screwed up the Steelers: the entire situation is a mess the team is still recovering from.

I know that’s the business of football, but also why this article is about Woodley: he was rewarded with one of the richest contracts in team history, and became, arguably, the cog that truly broke the machine. Had Woodley lived up to expectations, the Steelers may have gone in a different direction than spending 1st round picks on Jarvis Jones (2013) and Bud Dupree (2015.) The team may have let Jason Worilds walk a year early, and not use a costly transition tag on him. If Woodley’s contract were not as lucrative, could the team have retained other players? Signed other free agents? What effect would that have had on the defense as a whole? Would the 2015 Steelers be talking about a lack of a pass rush, rebuilding the defense, or any lack of depth at various positions?

Had Woodley continued to be the dominant player he was in his first 3-4 seasons with the team, I argue none of this would be discussed. Nothing against you LaMarr. Injuries are out of your control. But for the sake of an editorial, you were unfortunately the linchpin Pittsburgh could not afford, literally, to break the team.