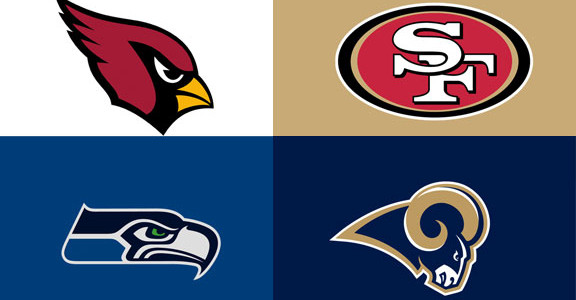 This is part of an ongoing 8-part series predicting the 2015 NFL season.

Making these predictions are a headache. It’s almost futile to say who is “good” and who is “bad” at this point in the season, but I will give it a reasonable shot.

What used to be the hardest division to predict, got a bit easier with the eradication of the entire 49ers organization. A team which lost a host of starters on offense and defense, along with undergoing a coaching change, doesn’t traditionally favor the ball club. After appearing in 3 straight NFC Championship games, the Niners finished 8-8 in 2014 and would be fortunate to not end up in the basement of this division while everyone else has caught up or surpassed them.

One of those teams is the Arizona Cardinals, who I still feel are overachievers to some degree. Defensively, they are a strong unit, while head coach Bruce Arians makes due with the offensive carousel at his key positions of QB, RB and WR. More stability at these positions could put them in contention to knockoff the Seahawks.

I’m still not sure how the Seahawks do what they do, and every time it looks like the wheels are going to fall off, they find a way to win. I wonder how many more times they can do it, now that their young players are signing big contracts, either with Seattle or leaving for greener (as in money) pastures elsewhere.

The Hawks added TE Jimmy Graham but let C Max Unger go. Safety Kam Chancellor‘s holdout could end up being what hurts this team the most. As with most Super Bowl teams, they start to get raided by other franchises for their free agents. It will be interesting to see if Seattle can continue reloading, but I feel they will still finish ahead of the Cardinals.

At some point, one would think the Saint Louis Rams will enter this conversation as a successful football franchise. With the number of draft picks infused into this roster of the years, the wheels are still spinning, particularly on an offense that cannot find their way. This season, they will make another attempt with Nick Foles at QB and first round pick Todd Gurley at RB. A pair of castoffs from coach Jeff Fisher‘s former team, the Tennessee Titans, haven’t improved the offense, nor has 2013 first round pick, WR Tavon Austin.

While the offense still appears to be a work in progress, the Rams defense continues to get stronger, and is the crux of which will keep this team in games. However, it won’t be enough to make the playoffs.