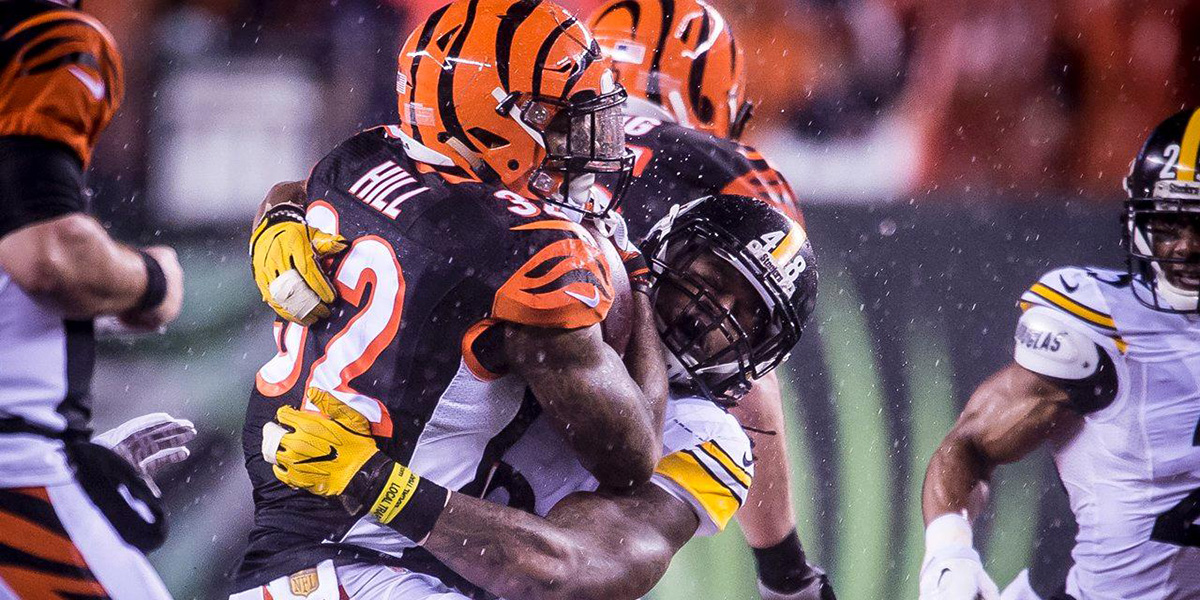 Nearly two months after their last encounter, and the words are still flying back and forth.

First it was the Bengals’ Adam “Pacman” Jones claiming Antonio Brown faked a concussion caused by Jones’ teammate Vontaze Burfict. Then it was back-and-forth banter with Brown’s response to both Pacman and Burfict: he was about as apologetic as Jones and Burfict were sincere in their apologies.

Long before Brown was concussed and removed from the Steelers, the fuse was already lit. I would go as far back as a 2005 wildcard playoff game where Bengals QB Carson Palmer was hit low by Steelers DE Kimo Von Oelhoffen, but most of the players on both sides of the ball that day are long gone.

Instead, the fuse was lit by the Steelers, and coincidentally the incident also involved AB.

It was during one of Brown’s punt returns in a 2013 game against the Bengals, that a competitive division matchup turned into an ugly, fierce rivalry. During the return, Pittsburgh Steelers Terence Garvin hit Cincinatti punter Kevin Huber with an intense block. The special teams standout and backup linebacker was fined $25,000 for the hit, which broke Huber’s jaw and raised the temper of a Bengal team which felt entitled to replacing the Steelers as the dominant team in the AFC North.

Instead, the Steelers climbed out of average seasons to compete for the division crown once again.

A year after Huber’s jaw as broken, return shots were fired by the Bengals when Le’Veon Bell was hit low by Bengals safety Reggie Nelson: the hit hyper-extended Bell’s knee and caused him to miss the following week’s wildcard playoff game.

Like the Huber hit, Bell’s injury drew the ire of Steelers who felt the hit was dirty.

Bell would return from the injury in 2015, only to be taken out by another, questionable, low hit by a Bengals defender. This time the blow was delivered by above mentioned Burfict, a player with his own questionable history of misbehavior on the gridiron.

Several Steelers took to the media, both traditional and social, to voice their displeasure with the hit, and Burfict’s behavior following the dive at Bell’s knees. Burfict had questionably raised the intensity of the rivalry by celebrating after the hit.

The Bengals drove home the harsh feelings with a game-winning drive. The Steelers would return the favor by beating Cincinnati in Cincinnati, setting up a Wild Card rubber-match between the two teams in the Queen City.

That Wild Card game turned into one of the ugliest NFL games ever played, one in which coaches were fined, trash was thrown at an injured player leaving the field (Ben Roethlisberger) and the Bengals imploding on the Steelers final drive, ultimately choking once again in the playoffs.

That’s the question: have the Bengals supplanted the Ravens as the Steelers chief rival, in the same way that Baltimore replaced Cleveland as Pittsburgh’s largest rival many years ago?

With the back-and-forth talk, and both teams contending for 10+ wins each season, one might think this is the case. However, unlike the Ravens, the Bengals have yet to win a meaningful game against the Steelers. Generally, this is how these things work:

The Steeler eliminate the Ravens from the playoffs.

The Ravens eliminate the Steelers from the playoffs.

One team bests the other for the division title.

Yet, Cincinnati can’t boast the same credentials against Pittsburgh. The Bengals haven’t won a playoff game since 1991, let alone winning a game against a rival.

Sure, the Bengals won the division, but they also had lead the AFC North for the entire year. Compare that to the previous season, in 2014, when the Steelers had the opportunity to “run the North” by defeating the Bengals in their final game, at home.

The fabulous self-destruction of the Bengals in the Wild Card game was icing on the cake, as the Steelers left the Bengals winless in 5 straight playoff trips: all one-and-out exits from the postseason.

Yet the Steelers winning 4 of their last 5 games against the Bengals may keep the fire burning for a Cincinatti team determined to prove they too can win. On the other side, the Steelers harbor resentment over the number of injuries caused to their team by Bengal players.

That will raise the intensity of these games, and make for must-see TV, but it doesn’t make for the NFL’s biggest rivalry as long as the only thing the Bengals can take away from the Steelers, is their health.