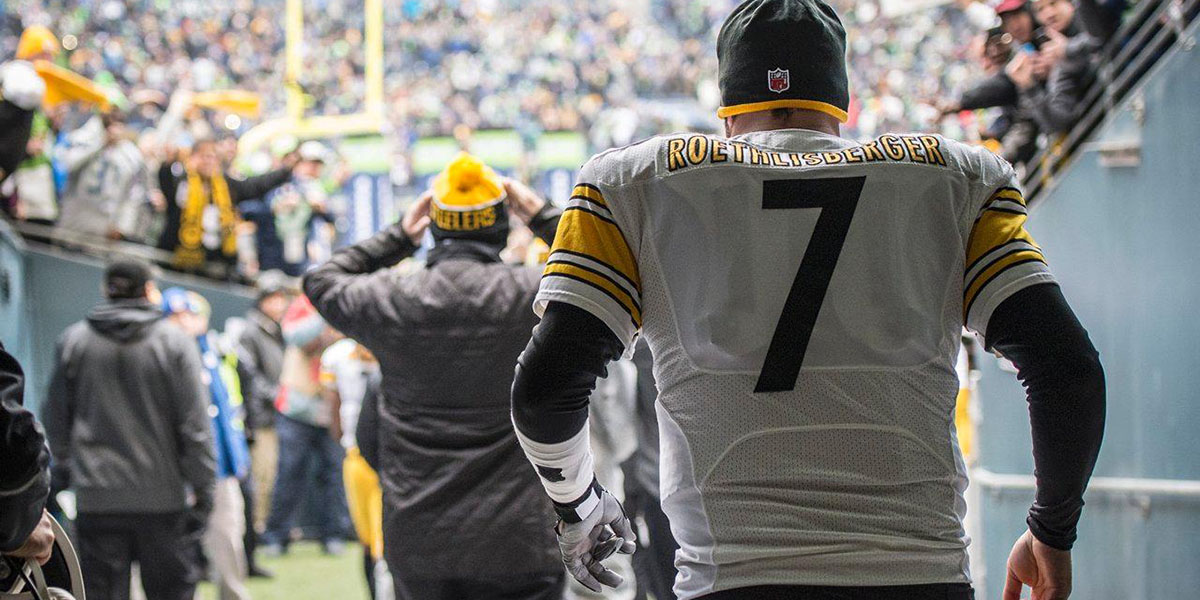 4 Arguments Against Pittsburgh Drafting a QB

The ever fickle nature of fans with nothing else to give attention to during the offseason has created a made up argument for the Steelers to take a quarterback in this year’s upcoming NFL Draft.

My reaction to this is: yikes!

Okay, let me step back a second, before I get on my soapbox. Yes, Ben Roethlisberger missed 4 games last season and was banged around in and knocked out of several of them. I’m not sure that’s an indictment that Pittsburgh needs another quarterback, nor do I think drafting one is a good idea. Here’s why:

The Steelers picked up a compensatory draft pick for losing Brice McCain (the previous season) and another draft pick for trading Brad Wing last year. This helps make up for the two picks they lost when they traded for Josh Scobee and Brandon Boykin. But it doesn’t necessarily make the team “whole” when it comes to the value of those picks. Perhaps if they had more picks available, they could take a flyer on a QB (as they did with Landry Jones several years ago) but I don’t see that happening, for other reasons.

Pittsburgh will already be selecting later in each round than their competition, by virtue of making it into the Divisional playoff round. They are seated as the 25th pick in the draft, an area where a first or second round quarterback selection would maybe be a solid pick. However, I can almost certainly guarantee that if they chose a quarterback in either of the first two rounds, it wouldn’t be the best quarterback in the draft, nor would it be one of the top players, as other teams are still seeking a franchise signal caller.

Keep in mind, the Steelers moved up the draft board in 2004 to select Ben Roethlisberger. He was the third QB taken with the eleventh overall pick.

Big Ben was chosen after Eli Manning and Philip Rivers, but the players after him are an indication of the sharp drop in talent after the first few marquee players go: J.P. Losman (1), Matt Schaub (3), Luke McCown (4) and Craig Krenzel (5). Ten more quarterbacks would be selected after Krenzel: only one of their careers (Jim Sorgi, 6th round pick by Indianapolis) would last beyond 2005, a total of 2 seasons in the league. (Sorgi himself would hang on until 2009 as a backup to Peyton Manning.)

Even going back to the 2012 draft, which would be 5 years after the 2016 edition is complete, the field of franchise quarterbacks is also hazy. Most still have a job in the NFL: Andrew Luck, Robert Griffin III, Ryan Tannehill, and Brandon Weeden were all first round selections. Griffin and Weeden are currently free agents. Weeden has played for 3 teams in 4 seasons.

Brock Osweiler just signed a huge contract, but only has 7 career starts. Russell Wilson is arguably the exception to the rule, a franchise QB found in the third round. Nick Foles and Kirk Cousins are two more notable names still hanging on.

The misnomer, with exception of Osweiler, is that each of these quarterbacks were given an opportunity to compete for a starting position (or drafted to be the starter.) This would not be the situation in Pittsburgh.

At the time, Brett Favre, the Packers franchise quarterback, was turning 36 years old. The Packers were probably not looking to take a QB either, but Rodgers story is not unlike some other franchise quarterbacks who had a dramatic fall in the early rounds of the NFL draft: he was chosen as the 24th overall pick.

Favre would only play 2 more seasons in Green Bay.

At age 33, Ben just signed a 4 year contract extension which keeps him with the Steelers through 2019, or at 37 years of age.

In other words, the Steelers are setup to start looking for Ben’s heir apparent… in the near future. Basing my assumption off of good health and the Favre scenario, we might look for the Steelers to start their search in 2018 or later.

Other Positions of Need

With the decreasing quality of talent beyond the first few rounds at any position, why would the Steelers want to burn an early draft selection on a higher quality quarterback, when they already have a future Hall of Famer at the same position? The choice should be made on an objectively more talented player at a position of need. Some of those positions where the Steelers could use an upgrade include cornerback, safety and possibly a nose tackle or swing defensive lineman who could spell Cameron Heyward or Stephon Tuitt.

If you like that idea (as I do) then you can see why taking a luxury pick who will only serve as a backup is a bad idea. Combine the idea with what just happened in Denver with the Osweiler situation, and a QB taken in 2016 may not ever see the field before Ben’s contract expires, leave via free agency, and leave the Steelers without any suitable option under center.