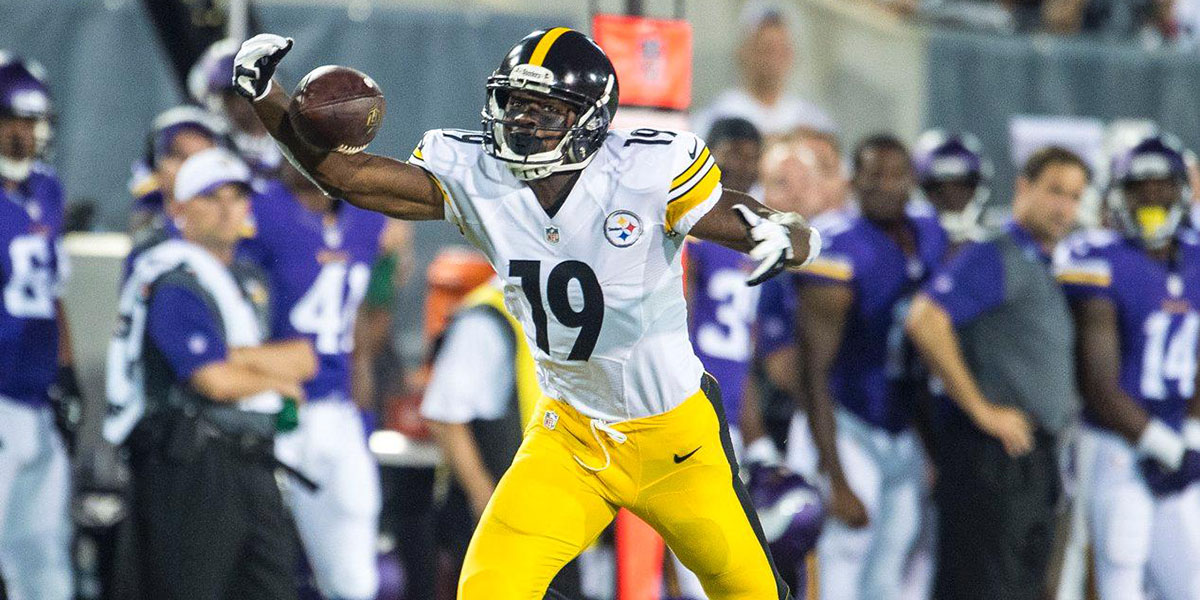 Which Receivers Will Make The Steelers Final Roster?

Camp buzz is buzzing louder, as the NFL season quickly approaches. Much like other years, everyone is taking their stab at guessing which long shot, underdog, or sleeper will make the final 53-man rosters in every camp.

The Steelers are not immune to this scrutiny, as with pro football news this time of the year, the most minute details get placed under a microscope. One of those closely examined camp battles features a litany of wide receivers. Pittsburgh currently has 11 wide receivers on their 90-man roster:

Depending on who you ask, I feel the top four players on this list are locks to make the team.

Without a doubt one of the greatest, if not the greatest, receiver in the game today, Brown will look to once again do the impossible, and improve on yet another record setting season. (Which I dedicated an entire article to here.) With several great seasons already behind him, the only thing that can slow down AB is himself. Barring an injury or contract dispute (which was the hot rumor heading into last year’s training camp) there’s no reason to think Brown won’t be dancing all over the field, as he did on TV recently.

The player whom I felt was on the offensive hot seat, Wheaton looks to carry his momentum from the end of 2015 into this season.

Wheaton started last season slow: in his first 10 games of the 2015 season, Wheaton recorded 16 receptions for 273 yards and 1 TD. In his last 6 games, he went off,  recording 28 receptions for 476 yards and four touchdowns (including a monster game against the “Legion of Boom” with 9 receptions for 201 yards and a touchdown.)

Markus Wheaton scorches the Legion of Boom for a touchdown #steelers #Steelernation https://t.co/2Qg37Vgi4p

Obviously #11 is being leaned upon to be the 2nd option after Antonio Brown, following the year-long suspension of Martavis Bryant.

Oddly, it was DHB who started last season as the replacement for Martavis Bryant, who was suspended for the first four games of 2015. With Bryant out for all of 2016, Heyward-Bey may get the call once again.

To do so, Heyward-Bey must improve on his pedestrian 2015 statistics, which include 21 catches for 314 yards and 2 touchdowns. Unlike Wheaton, DHB’s best production came at the start of the season. 17 of his 21 grabs, and both scores, came in the first 5 games; a tremendous feat considering Michael Vick was the passer in half of those games (including a relief appearance for Ben Roethlisberger midway through the Rams game.)

Many debated Heyward-Bey’s value, but after earning two single-year contracts in back-to-back seasons, the Steelers had the foresight to reward DHB with a 3-year deal. Critics will still question his hands and ability to contribute in the way Bryant did, however, it’s Heyward-Bey’s special teams ability which originally earned him his roster spot, then his offensive prowess.

While his special teams contributions have been noted for years, some still why Darrius would make the final cut. For those unsure of how DHB makes defenders respect him, look no further than this underneath out route, which forced the Bengals Dre Kirkpatrick into single coverage against Martavis Bryant.

Martavis Bryant with the catch of the year! https://t.co/ZB6wWnpctz

A well-rounded veteran, DHB is my third lock to make the roster.

There’s little tape to see on Coates, Pittsburgh’s 3rd round pick from 2015. That’s because, much like Antonio Brown and others before him, Coates was the low man on a loaded depth chart. Appearing in 7 regular season games, Coates only saw 2 targets. After not being used in the Steelers Wildcard game against the Bengals, Coates appeared in the Divisional Playoff game against the Denver Broncos, catching 2 passes for 61 yards, including a 37-yard scamper.

You're looking at the future of the #steelers Sammie Coates! https://t.co/oiJY1PLfW8

With a higher draft pick invested in the former Auburn standout, it’s wise to think Sammie will be the fourth wide receiver to make this team in 2016.

And then there was one

The Steelers typically retain a minimum of 5 WRs on their full roster, which means the remaining 7 receivers may all be fighting for a lone spot on the 53-man roster. The edge for the final roster spot appears to be a 2-man race: this year’s 7th round draft pick Demarcus Ayers, and Eli Rogers, an undrafted free agent who was injured during camp last season.

Both players are expected to pick up the slack for the Steelers special teams woes, both in the kick and punt return games. The one who wrests the upper hand on the other will likely make the 53, while the other will be relegated to the practice squad.

If either Ayers or Rogers fail to impress as special teamers, an underdog pick from the remaining receivers in camp is Shakim Phillips. The 6′ 3″ Phillips is another 2015 camp holdover, who spent a portion of last season on Pittsburgh’s practice squad.

I’m surprised there’s little buzz on Phillips, as he’s a much bigger target than Ayers (5′ 11″) or Rogers (5′ 10″) with a faster 40 time as well. Additionally, Shakim was one of the final cuts heading into the regular season, playing in all 5 of the team’s preseason games. Fans may remember Phillips for his 35 yard reception in the Hall of Fame game, or his 3 catch, 47 yard performance against Green Bay, including this touchdown:

Shakim Phillips hauls in a TD pass from Landry Jones in week 2 of the 2015 preseason https://t.co/ozrfeh8b6E

And his aforementioned one-handed grab in the Hall of Fame game last year:

Each year there are tough decisions made as to who stays, and who goes, from an NFL roster. Rosters are an ever-evolving body of work, where the bottom 10 or so players are at risk of being moved for players on the practice squad (who are constantly called up, or released; whatever the situation calls for that week.)

It will be interesting to see who ends up with the final spot. As noted, there’s always preseason hype in finding sleepers who will not only make the roster, but improve a team’s chances at winning games. In the end, being drafted doesn’t always guarantee players a spot with the team, and it may be undrafted players, such as Ramon Foster, who end up making a lasting impression.