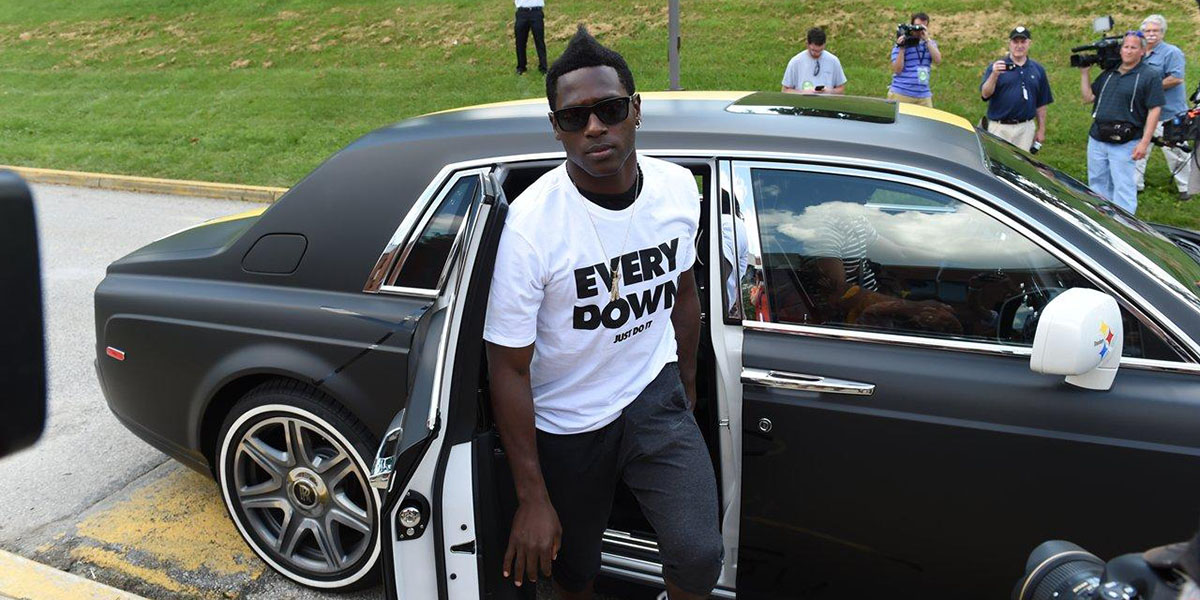 Can Brandon Marshall win his bet with Antonio Brown?

What a difference a day makes! At least, if you are Brandon Marshall…

Ryan Fitzpatrick and the New York Jets agree to terms on a new contract, bringing the quarterback back to the Meadowlands for at least one more season, following a lengthy holdout.

Ryan Fitzpatrick and the Jets have agreed on a 1-year, $12 million fully-guaranteed contract. (via @AdamSchefter) pic.twitter.com/JRbKz90Zue

The news prompted Brandon Marshall to make a crazy bet on social media; the receivers is betting he will gain more yards than Antonio Brown in 2016. Fitzpatrick’s signing is significant, in that Marshall waited for his QB to rejoin the team before making the bold statement.

That’s because the New York Jets had no other proven talent at the position. 2013 2nd round pick Geno Smith never lived up to his pre-draft hype, starting all 16 games in his rookie season, but got benched in favor of Michael Vick in 2014. The Jets have also drafted QBs in the last two drafts, selecting Bryce Petty in the 4th round of the 2015 NFL Draft, and Christian Hackenberg in the 2nd round of this season’s iteration. (Side note: Hackenberg was taken with the 51st overall pick while Smith was selected 39th overall in the same round 3 years prior.)

Heading into 2015, Geno Smith was presumed to be the starter; that was, before getting in a locker room scuffle with linebacker IK Enemkpali, in which Smith’s jaw was broken. Due to surgery, Geno would miss the team’s first two games, which lead way to journeyman quarterback Ryan Fitzpatrick, in his first season with the team, to take over the reins.

Fitzpatrick would lead the Jets to a 2-0 start to open the season, leading head coach Todd Bowles to stick with well-traveled QB for the remainder of the season. Fitzpatrick would have career highs in passing yards and touchdowns, though his completion percentage dipped to a five-year low.

Since none of the other quarterbacks would likely help Marshall achieve his goal. With Fitzpatrick now under contract, the Jets fortunes are looking brighter for 2016; so much brighter, that wide receiver Marshall was willing to bet his Porsche on gaining more yards than Antonio Brown this season!

Marshall is putting his money where his mouth is, but if I were him, I’d be careful. Fitzpatrick’s 2015 numbers were nearly good enough to lead the Jets to their first playoff berth since 2010 (when they lost their 2nd straight appearance in the AFC Championship game to the Pittsburgh Steelers.)

Let me say that again: Fitzpatrick’s numbers were nearly good enough: the QB imploded in the Jets’ final game of the regular season, throwing three interceptions against the Buffalo Bills, and enabling the Steelers to move on to the postseason.

That game signifies why Ryan has been a traveling QB in the latter stages of a 12-year NFL career. Last season was the first time that Fitzpatrick had a winning record under center. His previous seasons were marred with throwing picks, low touchdown totals, and fairly unproductive passing numbers overall. In 2015, Fitzpatrick was 29th in completion percentage, ranking middle of the pack with 15th in yards and 10th in touchdowns, but 5th-most in interceptions and 24th in QB rating (88.0.)

The reason all of this is significant, is that Brandon Marshall is hedging his bet on a quarterback who doesn’t regularly average 250 yards per game. Fitzpatrick’s 244.1 yards-per-game average last season was his career-best, but he’s going to have to do better if Marshall wants to keep his car.

Over the last 3 seasons, Antonio Brown has beat Marshall in targets, receptions and yards:

Furthermore, Ben Roethlisberger‘s numbers overshadow Fitzpatrick’s in every major statistical category, with being having played only one more game over that same period of time.

If I was a betting man, and considering everyone remains in good health, I would surmise that Antonio Brown, who has the NFL creating records for the videogame numbers he’s put up over the last few years, will be driving a new Porsche into Saint Vincent College for next year’s training camp.