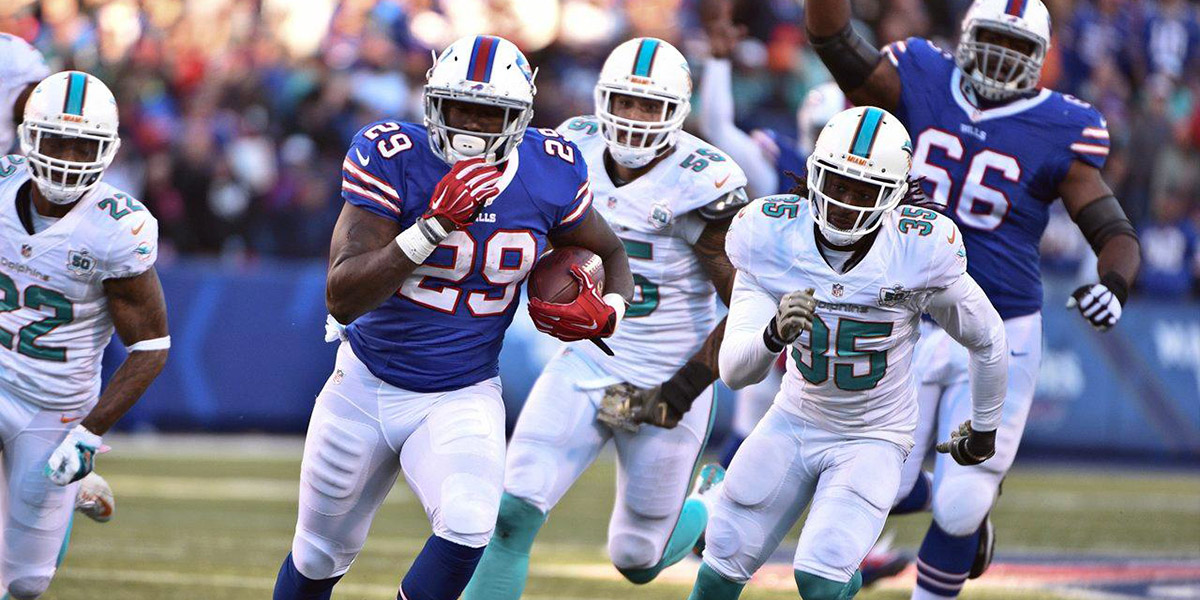 Steelers showing interest in Karlos Williams; should they?

It’s been an odd time for us writers. Our speculations have been coming true lately. Keenan Lewis for example was brought it for a visit after being cut, now there is reported interest from the Steelers in ex-Bills running back Karlos Williams.

Williams had character concerns entering the league. Despite these risks, the Buffalo Bills selected Williams in the 55th round in the 2015 draft. Williams played well in his limited role, behind LeSean McCoy. Subbing for the starter, Williams accumulated 517 yards and 7 touchdowns rushing, as well as 11 receptions for 97 yards and 2 touchdowns receiving.

His success in 2015 made it almost shocking that he was cut this offseason; but it happened for good reasons.

Williams is facing a four game suspension for violating the league’s substance abuse policy. It was also reported that Williams showed up to camp out of shape. Both of these factors are significant and despite Williams being a talented player, his release is justified.

The Steelers have been burned a lot in recent years regarding players with character concerns. Most recently star players Martavis Bryant and Le’Veon Bell have caused headaches for the organization. As Tomlin says though, he doesn’t live in his fears. If the team sees value in Williams, it would be wise to sign him, for multiple reasons.

Williams’ weight is a concern and it certainly shouldn’t be ignored. However, some digging shows the weight gain wasn’t simply due to laziness. According to an article from ESPN, his weight gain was contributed by his wife’s pregnancy. Because she would often eat unhealthy foods due to cravings, Williams would eat with her as a support system. This doesn’t give him a free pass, but it paints a clearer picture.

If Williams can whip himself into shape, the team would benefit by having depth for the future. DeAngelo Williams is a great player, but he’s old for his position. In the last year of his contract, this could be DeAngelo’s last year in Pittsburgh. The other Williams, Karlos, has the potential to be a starting back, and would be a great number two behind Bell next year.

He would also be a great addition this year; he may have a four game suspension, but Williams would be an investment; there’s no immediate need to get him on the field in 2016.

Considering Pittsburgh already has DeAngelo Williams and Fitzgerald Toussaint, behind one of the NFL’s most dynamic runners in starter Le’Veon Bell, the investment in Karlos would be over time. Should Bell or DW go down again, a common occurrence over the last two seasons, where the Steelers have been stuck with undrafted and/or street free agents attempting to fill big shoes with little preparation.

The concerns around Karlos’ behavior could be avoided with the Steelers, as Williams would have more accountability in Pittsburgh. He is the little brother of current Steelers linebacker Vince Williams, who’s presence should provide more motivation for the young player.

Having better role models would benefit as well. In Buffalo, the offense was relatively young. Williams may not have had a mentor: LeSean McCoy is a veteran, but got in trouble with the law recently. Tyrod Taylor has good character, but is still a young quarterback. The Bills are a young team, with a new coaching staff, trying to find their way.

A stable organization can do wonders for a player, and Pittsburgh may be a perfect home for Karlos Williams.