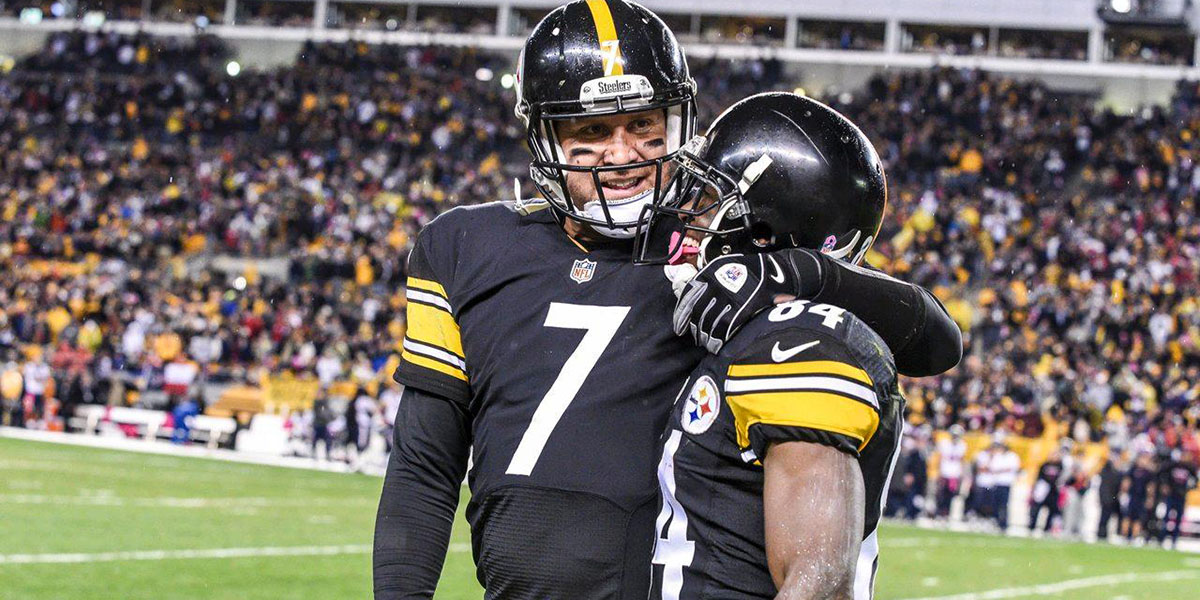 Which Steelers do you want on your fantasy team?

There’s a love/hate relationship with fantasy football, so I understand if this article isn’t for the average football Joe. However, it’s been a long time coming that the Pittsburgh Steelers have several options among the most popular picks in fantasy football.

Some of the names are obvious, others are not so obvious, and then there are players, that depending on your league (scoring, number of teams, positions played, etc.) that you may want to avoid altogether; even if they are Steelers!

Here’s a list of Pittsburgh players you do (and don’t) want, in your quest for a fantasy championship.

The headliner of any fantasy list, I remember when I could find AB in later rounds, then maybe around the 3rd or 4th. Now you’d be lucky to get him at pick 2, because he’s going as the top player overall in almos every fantasy draft.

I think the reason it took Brown so long to get this kind of respect, despite years of destroying secondaries around the league, is that some people had a bad taste in their mouth over Steelers receivers throughout the years. Players such as Hines Ward or Mike Wallace put up respectable numbers at times, but we’re usually inconsistent in a run-first Steelers offense.

Fast-forward to the present day, and Antonio puts up numbers that would make Madden video game players blush: the statistics are unreal, and furthermore, though Brown is creating NFL records with his play, he continues to get better!

If you have one of the top picks in your draft, and Brown is there (especially in a PPR format) you want to snag him ASAP. Even in standard formats, Brown still scores enough touchdowns, and puts up an insane amount of yards which separate him from the rest of the pack at his position.

What little we’ve seen of Bell in the preseason would make you want to take him over anyone, including Brown. Unfortunately, Bell’s setback with a 3 game suspension will cause him to fall in most drafts.

Don’t let the person to pass on Bell be you. Though he only played in 6 games last season, Bell was in the top 5 scoring running backs for 8 weeks (yes, eight!) He is still the 13th ranked player overall according to consensus ADP (Average Draft Position) with an RB6 average rating.

Considering his return to health, and additional role in the Steelers passing game, Bell is a back you want on your roster.

Big Ben in an enigma: for those who have owned him in the past, you could be frustrated when the touchdowns come by way of the running backs. In addition to Bell, the Steelers will lean heavily on DeAngelo Williams as well, the latter who scored 3 TDs in one game last year.

Yet, if you’re not into jumping early on a QB, Roethlisberger is an oft-overlooked option as an every-week starter. He will put up respectable numbers, and by virtue of the names above, has incredible talent around him whereas some others quarterbacks that will get drafted ahead of Big Ben, will not be the same consistent player week-in and week-out.

Patient fantasy players who hold out till the mid-to-late rounds would be wise to grab Roethlisberger at his current ADP of 53/QB6.

I love to say kickers are people too, and if the Steelers offense soars as expected, Boswell will be a beneficiary of the production. Heading into his first full year as the Steelers kicker, Boswell has a stronger leg than his predecessor Shaun Suisham, who was also a very consistent kicker, but started to struggle outside of 40, and definitely beyond 50 yards.

While it wouldn’t help your fantasy scoring, it’s important to note Boswell also went 7-for-7 in 2 playoff games, under extreme pressure (including the game-winner in the Donnybrook against Cincinnati.)

While I don’t advocate reaching for kickers, if you want a steady starter, rather than streaming kickers each week, you won’t go wrong selecting Boswell.

Last year, with Le’Veon Bell suspended to start the season, we saw Williams explode on the scene.

This season will be no different, as the aforementioned Bell will miss the Steelers first three games to open the year. When Bell was placed on IR, Wililams would take off again, ending the year as the Steelers leading rusher with 907 yards, 11 rushing touchdowns and career highs in receptions with 40 for 367 yards.

DW is a player that can get you some important victories to start the season, but might be a reach if he ends up being only a 3 game starter, once Bell returns. It’s difficult to gauge his role beyond those first 3 games, so his biggest value may come as a handcuff, if you are able to select Bell in earlier rounds.

As a necessary handcuff, that is a player stashed on your bench in the event one of your starters (usually on the same team, hence the term “handcuff”) gets injured. Though Bell’s injuries have come at the hands of suspect play (rather than torn muscles or of his own doing) he has still been limited, and has missed at least 3 games in each season as a Steeler.

Therefore, draft Williams with an asterisk next to his name, knowing you will get great value, if and when he’s on the field.

The “other” WR on the Steelers depth chart is one that is also overlooked: with good reason too.

Wheaton had a miserable start to his 2015 season, underperforming on the field, and thus underperforming in fantasy. Those in deeper leagues probably had better fortune during his final 6 games, when Wheaton went off, especially against the Seattle Seahawks, with 9 catches for 201 yards and a touchdown.

He would end the season scoring 4 of his 5 TDs in those final 6 games, with a lot more targets along that stretch too.

Considering Wheat did this with Martavis Bryant on the field, eating targets and TDs, one might expect him to be a sleeper pick. I would draft Wheaton knowing he isn’t going to give you much more than his WR46 ADP: he may be no more than a bye week filler, or in deeper leagues, a WR3 or FLEX option.

However, his ceiling could be that of WR2 numbers that may also climb into WR1 territory, depending on the matchup. Proceed with caution knowing the Steelers have lots of mouths to feed, and Wheaton could end up on the short end of the production scale.

I have to add Green here, because he’s a big body target akin to Martavis Bryant, but playing in a TE role. At the moment Green’s playing status is uncertain, and with no training camp or practice, he could be gently eased into the offense, should he play.

In San Diego, Green played over 60% of his snaps out of the slot; if that trend were to continue in Pittsburgh, he could easily find himself making up for the 50-60 catches that Byrant, and the retired Heath Miller, made in 2015. (Green was a solid fill-in option for Antonio Gates last season, when Gates missed the first four games due to suspension.)

A tight end on the bench is a luxury, but if your league has enough spots, or you’re in a deep league, you may want to take a waiver on Green, depending on the other options available.

I’m going to break the Internet by saying no other Steeler receivers are worth drafting at this time. Even in deeper leagues, where grabbing slot receivers may round out your roster, the Steelers depth chart is too undecided to know who else besides Brown and Wheaton will be getting reps.

In this mix are players like Darrius Heyward-Bey, Sammie Coates and Eli Rogers. Coates is thought to be Martavis Bryant’s successor, but has failed to be consistent enough to live up to the billing thus far this preseason.

Heyward-Bey was Bryant’s replacement when the receiver was suspended and injured last season, but didn’t put up as big of numbers.

Both Coates and DHB may be sitting behind undrafted Eli Rogers, who has found significant playing time out of the slot this preseason. Rogers is a favorite of the coaching staff, and is spoken highly of by Roethlisberger. At times he looks like a younger Antonio Brown, however, he does not project to put up numbers anywhere near any of the other Steelers receivers.

Ladarius Green’s stand-in, last year’s fifth round pick, Jesse James, won’t put enough significant stats up to be a consistent weekly starter (much like Heath Miller.) He’ll be a far better football player than fantasy player, and should be avoided in nearly all formats.

I’m up in the air on this one, because we’re still not sure what we have in the Steelers defense. The unit was 3rd in the league in sacks, and created a lot of turnovers last season (including some pick sixes) and should they be consistent enough to hold teams to less points, could be the steal of your draft.

I dislike drafting defenses early, and rarely do top-ranked defensive units end up that way by the end of the fantasy season. Sometimes streaming defenses each week, that is, picking up a new unit based on the matchup, yields better results than blowing a higher round pick on the Legion of Boom.

For those reasons, if you find the Steelers D hanging around near the end of your draft, don’t hesitate to pull the trigger, knowing you didn’t waste your selection on another position that could better round-out your team.