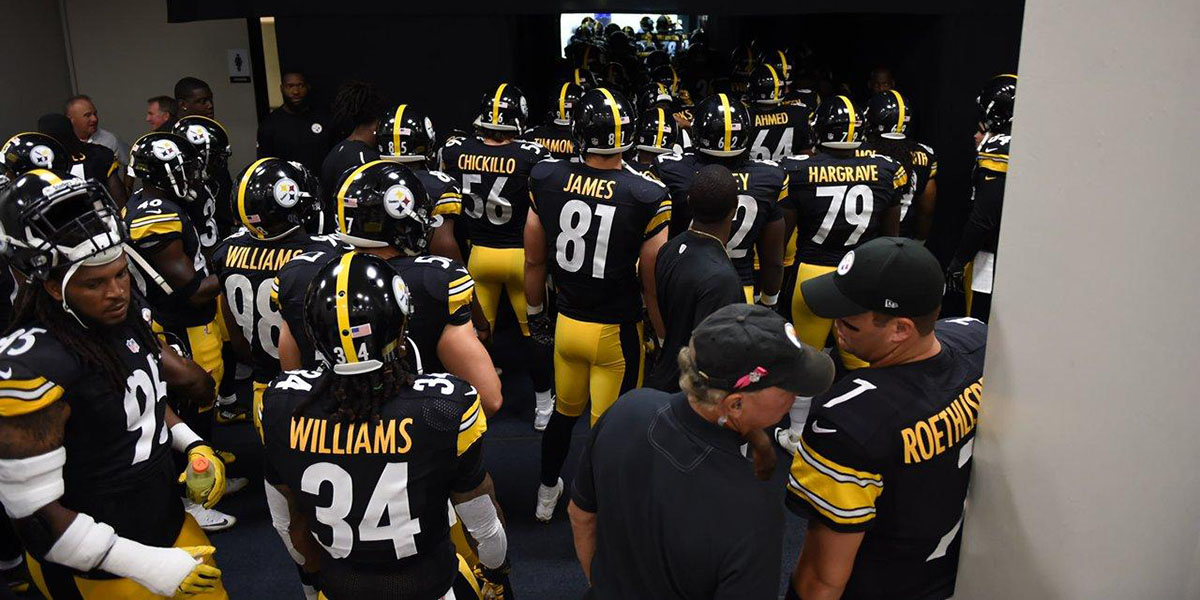 by Eric Herrmann (SteelersGrind) on September 2, 2016

With the final roster cuts coming this Saturday at 4pm, it’s time to release my next 53 man roster prediction.

By now, there are many familiar faces on the current roster, so once again, this article will be focused on the fringe players.

Note: names are not in any specific order. This is more of an exercise at predicting the final 53 players, than a full-blown depth chart: I didn’t intentionally place players higher or lower at their position.

Ben and Landry making this roster should come as a surprise to no one. Despite some haters, Landry is a lock and will likely enter the season as Ben’s backup. His play has been up and down in the preseason, but his most recent showing against the Saints should inspire some confidence inf fans.

Mettenberger seems to have the number three spot secured, since the Steelers reached out to secure him off waivers.

Considering he joined the team so late, lets hope he doesn’t see the field anytime soon.

Le’Veon Bell is suspended for the first three games of the season, so he won’t start the season on the roster. His misfortune gives Daryl Richardson a shot to prove himself. Richardson and Fitzgerald Toussaint have been in a roster battle during camp, but Toussaint appears to have won the battle despite Richardson’s surprising play.

Once Bell returns, Richardson may be getting some bad news.

DeAngelo Williams is a lock of course and will be the starter in place of Bell.

Roosevelt Nix is a lock and many Pittsburghers (including myself) would riot if he got cut. He’s a crushing run blocker, core special teams player, and has flashed both running and receiving skills this offseason.

The wide receiver group is another set of locks.

Eli Rogers has gotten extensive playing time with the first team, and may even start as the slot receiver; he’s here to stay.

The rest of the group isn’t debatable, and will all make this team. (The Steelers tend to carry five receivers, so don’t expect any surprises.)

Ladarius Green‘s placement on the PUP list means Xavier Grimble and David Johnson will both make the roster. While Jesse James will be the starter, its up in the air who gets the number two spot.

Many are worried about the tight end position, but the Saints game last week brought me comfort: James proved he is capable of starting, and that he can contribute to this offense.

He will be a fine starter until Green returns.

The Steelers do like having tight depth on their roster, so I won’t be surprised if they bring in another tight end while Green continues his rehab. Grimble could certainly be bumped off the roster for a player released by another team. He’s flashed promise in the preseason, but has been inconsistent overall.

The offensive tackle group is another position locked up. Jerald Hawkins would’ve made it, but he was placed on injured reserve.

The battle for the backup guard position came down to the wire. BJ Finney and Chris Hubbard could both make this team, but only one will, though Hubbard has more experience with the team.

I think Finney wins the battle because of his upside.

Hubbard has shown versatility and the ability to play all over the offensive line, but his talent appears to have plateaued. I’ll take talent and upside over the ability to poorly play tackle.

The Steelers also showed how much they like Finney when they gave him a nice signing bonus during the 2015 season; I believe they will stick with the young player.

The center position is also locked. Cody Wallace got hurt versus the Eagles, but if he is able to return to soon, he will be Maurkice Pouncey’s backup.

It’s been awhile since we’ve been able to say the defensive position is secured, and it sure feels good being able to write it.

Mathews has played far better than anybody expected, and could play a role for this team rotating in at defensive end, as well as defensive tackle in sub packages.

LT Walton hasn’t flashed this offseason, but he has shown signs of improvement, and certainly has the look of a prototypical 3-4 defensive end. His arrow is pointed upward, so the Steelers would be smart to hold onto him.

The defensive tackle position is also sewn up: McCullers and Hargrave are different types of players, and both will play a unique role for this defense.

I wouldn’t expect any turnover.

Chickillo is a player the team wants to hold onto. He has received glowing reviews in practice due to his improved physique. Our edge rusher group is crowded, but Chickillo can shine on special teams and continue to improve his game.

If one of the guys in our four man rotation goes down, I’d have confidence in Chickillo holding is own.

The only surprise in this group may be the absence of Travis Feeney. Feeney was drafted in the sixth round of the 2016 draft, and through he has flashed his athleticism in practice, he is far from ready to contribute to this defense.

A year on the practice squad is the perfect recipe for this young player.

Inside linebacker is probably the hardest group to predict: LJ Fort, Steven Johnson, and Tyler “Dirty Red” Matakevich have all shown the ability to play at times, and could easily make this roster.

However, I believe Johnson will be the odd man out.

Matakevich hasn’t gotten an abundance of playing time, but he has managed to make plays any time he is on the field. Mike Tomlin recognizes the ability to make splash plays, and Tyler snagged an interception versus the Saints. “Dirty Red” has simply flashed too much promise for the Steelers to let him go.

Deciding between Fort and Johnson was tricky: I flip-flopped between the two, but ultimately I feel Fort has won the spot, due to outplaying Johnson on the field. Johnson may have the advantage of being brought in as a free agent this offseason, but battles are won on the field, and Fort has proved capable of making this roster.

It also doesn’t help that Johnson made some critical errors on special teams during the fourth preseason game, where both sides’ starters sat on the bench; Johnson would primarily earn his playing time during kick and punt coverage, and cannot be a liability when he’s out there. Everyone has a bad game, but I wonder if this final game, after being quiet for the majority of training camp and the preseason, doesn’t seal the deal on Steven’s future as a Steeler.

Senquez Golson’s injury has created a competition at the cornerback position. However, Golson must initially make the roster before being placed on injured reserve.

The top four players are all locks to make this team, but the fifth spot is wide open. It’s hard to determine if the spot will go to a player on the roster, or somebody who’s currently playing for another team.

For now, I give the spot to Al-Hajj Shabazz.

It’s hard to predict if Shabazz will make this roster or not. He may get bumped for player off of waiver wire, similar to B.W. Webb getting dropped for Ross Cockrell last season.

Shabazz has played the best among all the fringe corners, and also received special teams snaps, which helps his value.

Similar to the cornerback situation, Ross Ventrone‘s injury opened up a roster spot.

This could go to a waiver wire pick up, or veteran free agent Will Allen, but for now I’m giving the spot to Jordan Dangerfield.

Dangerfield brings value as a special teams player and that is exactly what you want in a back-up safety. He’s a fan favorite due to his hard-hitting style, and if he’s able to stay on this roster, he could make noise on special teams.

Jordan Berry is a favorite here at Steel City Underground, and he’s shown great improvement during the preseason.

Will Monday never had a shot.

It appears the Steelers may finally have a long-term punter.

Chris Boswell is another fan-favorite who is a lock to make this roster. The kicker who brought stability to the team last year has continued to show his consistency this offseason.

Greg Warren may or may not be a fan-favorite, as he’s rarely heard from… but when your job is to snap the ball being unknown is a good thing!

With a number of injury and suspension decisions to be made, plus a few shaky bubble players, the Steelers will be making more moves beyond Saturday’s 4pm deadline. This prediction is as accurate as we can make it (since our time machine broke down) so hopefully you enjoyed our predictions, and we can all discuss where we were right/wrong early next week!