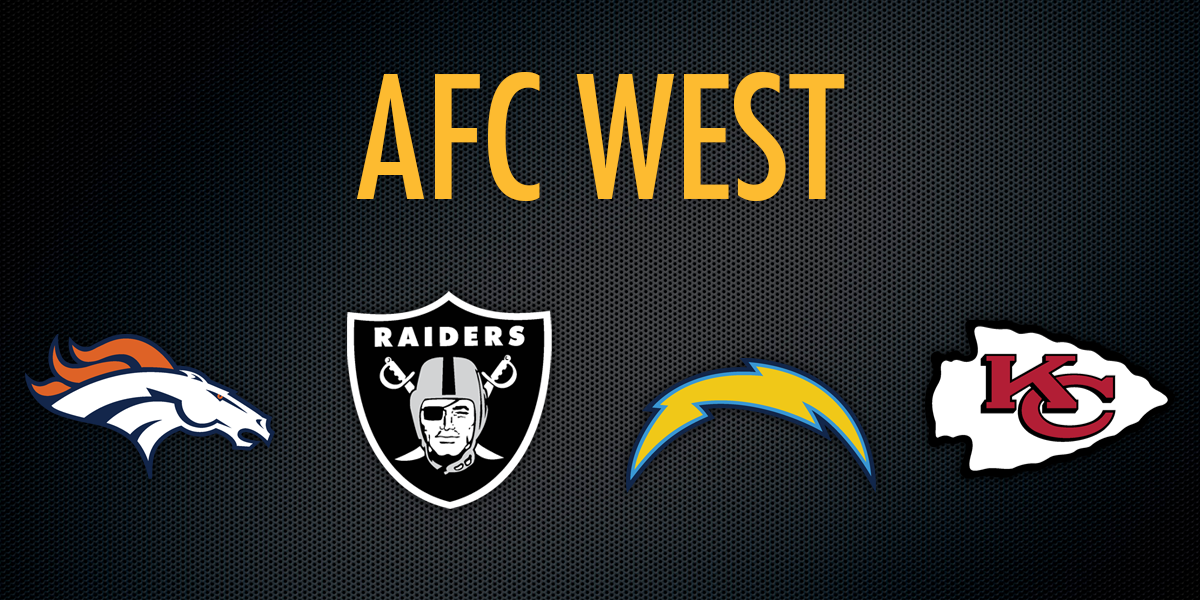 This is part of an ongoing 8-part series where the Steel City Underground team takes their stab at predicting the 2016 NFL season.

This edition focuses on the AFC West.

Looks like we have an even split among the SCU team as to who ends up atop the AFC West! Oddly, everyone picked the Raiders to contend as the 2nd-best team, and San Diego to be the basement dwellers.

Here are the individual comments from each writer:

Without Manning or Osweiller there this season, last year’s 3rd stringer, Trevor Siemien (sp?) has won the starting job over journeyman Mark Sanchez (cut following the preseason) and first round pick Paxton Lynch. This situation, combined with key losses on that strong defense, will put Denver in a precarious position of trying to defend their title; or make the playoffs… Several Super Bowl winners have failed to make the postseason the following year, and that’s where I’m predicting Denver falls short.

This year’s top defense in the AFC West will be the Kansas City Chiefs, with a game manager in Alex Smith, they could easily take top billing in the division. The Raiders are a young team on the rise, and could compete for a Wildcard spot.

The Chargers, in my opinion, have done nothing to address any of their issues. There are far too many questions as opposed to answers on this team, and they will fall to the basement of this division, perhaps as their swan song in San Diego.

I think the Broncos still are tough enough to take the division, but the Raiders might give them a run. The Chiefs I think will be perennial also rans as long as Andy Reid is there with Alex Smith. And I just don’t like the Chargers. They could surprise me, but I think Bosa ends up being a non-contributor this season, and Rivers knees are ancient. Melvin Gordon could have a good year, but I still think he puts the ball on the ground too much.

With the departure of Manning, the defense had to step up and carry the offense. The Broncos defense had another great year, leading the league in almost every category.

The Raiders finish the season with a winning record, and secure a wild card spot in the playoffs. Derek Carr had an excellent third year, and all those FA signings paid off for the Silver & Black.

Alex Smith and the offense struggled, along with the defense. They finish with a winning record, but fall short of the playoffs. Phillip Rivers and company had some success, but with a historical bad defense, they couldn’t hold onto any momentum.

Alex Smith finally starts passing to WRs with regularity, as a 32 TD season and RB Charcandrick West has a career year tying AP in rushing yards. They win their division.

Derek Carr continues to show he can hold his own in the NFL but coaching decisions on many 3rd downs will eventually have them fighting for a Wild Card spot. They will be plagued with injuries on defense

Denver’s lack of a solid QB will be their downfall. They will have the typical post-SB hangover and we will all call it “rebuilding” after the retirement of Manning, while Rivers continues to throw more INTs than TDs His time in SD may be coming to an end as they look for trade options by the end of the season.