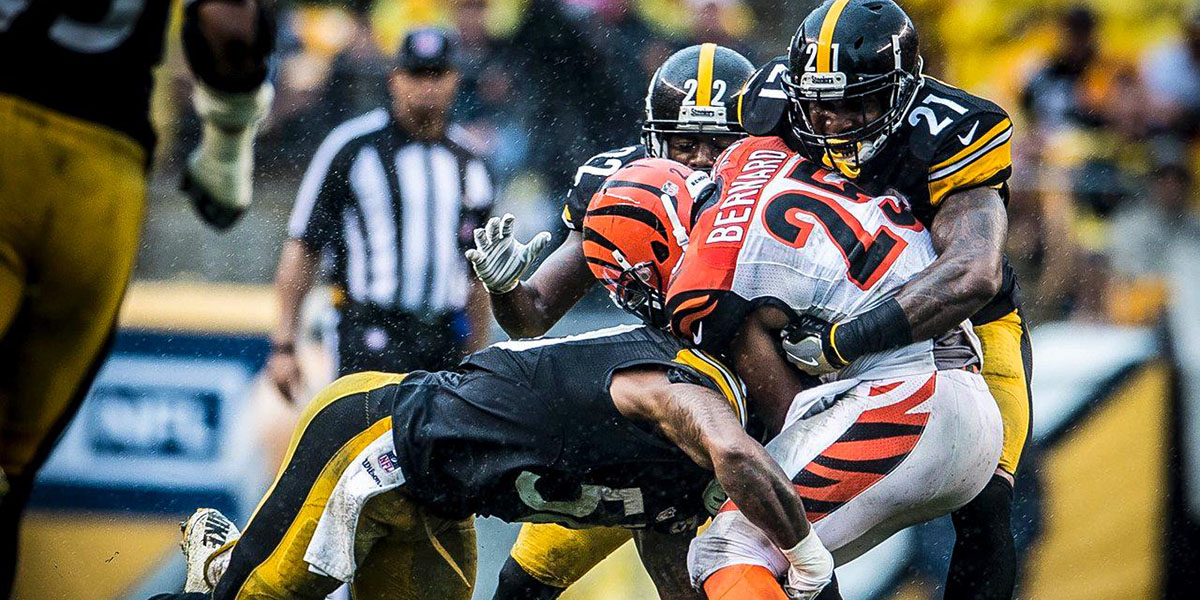 Weathering the Elements at Heinz Field for a WIN

by Terry Fletcher (TerryinSoCalif) on September 20, 2016

At Heinz field this past Sunday, the weather at the start of game time was unlike any we’ve seen in Western Pennsylvania this football season: a steady rain falling and 81 degrees.

According to Ben Roethlisberger, this made the field conditions “Defensive Heaven”:

“I wish I would have played better. I think that this was – the weather was a defensive heaven.

It was very tough sledding on offense. For us, especially going against such a tough defense, it wasn’t easy to make plays. But I thought we did. We made the plays when we had to.”

The elements dictated how the game was played on Sunday.

We saw balls coming out for fumbles, from both QB’s.

We saw a rare missed catch from a wide-open Antonio Brown, which would have meant huge yardage on a 3rd down play, but ended up taking the team to a punt on 4th down.

The balls were coming out of Ben’s hands short or behind receivers, as we could see the wetness of the balls; the heavy rain would carry them to the left of the throw causing accuracy issues.

Ben also slipped on a couple of drop back plays.

There are many more plays which describe the wet weather; needless to say, conditions were most definitely a factor on Sunday. It’s no more apparent then when you watch a later game in a dome field, like Sunday Night’s Green Bay at Minnesota game, and see how warm and cozy they are in their climate controlled space.

For me, the weather and outside field elements add to the game. It adds to the balance for both teams. When you play in the temperature-controlled dome stadiums, it’s all about the quarterback play. It tends to take the team element out of the game.

However, in the ever-changing rain, which went from nothing, to drizzle, to downpour, off and on, teams had to adjust to the slippery field conditions. The Bengals, did a good job taking away the outside threat of the Steelers wideouts. This forced Big Ben to adjust for not only the elements, but for the looks he was given. He had to make his TE’s work the inside.

It was tough sledding on offense for sure, against a solid defensive AFC rival. TE Jesse James and new-to-the-show TE Xavier Grimble rose to the occasion, with both scoring a touchdown. They accounted for 2/3 touchdowns thrown by Roethlisberger. For the first time since October 20th, 2013, Ben Roethlisberger didn’t throw a touchdown pass to a wide receiver (when throwing at least one in a game.)

Grimble, not only had one of the TD’s, but it was his first NFL catch as well. His only other catch of the game, a diving grab of an underthrown pass by Ben on 3rd and 1, helped move the chains.

Sammie Coates contributed for deep yardage on a seemingly busted play. Jesse James did a nice job of using his 6’7″ 260 lbs. frame to go up and get a highly thrown ball in a crowd of Bengals for a TD.

Despite poor completion percentages by both Roethlisberger (and likewise by Bengals QB Andy Dalton) the Steelers perservered with the most unlikely of candidates. Antonio Brown was held to 4 catches in the game. The offense heavily leaned-on the NFL’s leading rusher, and last week’s AFC player of the week, RB DeAngelo Williams: who had the other receiving TD, while adding 94 rushing yards.

In these elements there was no other option but to focus on the “Jerome Bettis type of weather” football. Even Ben got in on the act, a bit of a surprise, seeing Ben channel his youth to rush for 14 yards to the 3rd yard line.

Again, a weather dictating play, just to take what is given to you in the moment.

In all of that there is still a concern that the Steelers’ are not getting to the QB in the pass rush. Andy Dalton was only sacked once, by LB Arthur Moats when Dalton tried to scramble. It was hardly a sack, and didn’t register for but a loss of inches, however, as a unit, the defense did a decent job creating pressure and some disruption to grind out the win.

As the season continues, teams are expected to get better.

Grinding out a win against a division opponent is a step in that direction.