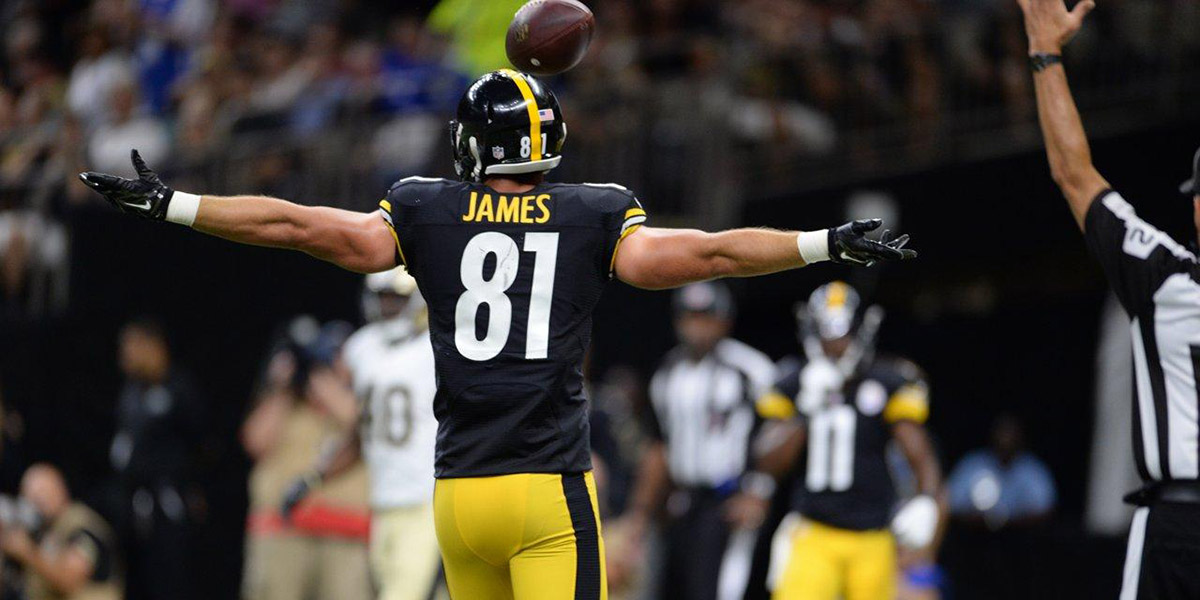 If Orange is the New Black, is Jesse James the new Heath?

When longtime Steelers TE Heath Miller retired after the 2015 season, many were concerned that the Steelers would never find another player as unselfish and perfect at the position as Heath was. Ben is even quoted as saying Heat was the “Best teammate I ever had”.

Miller owns every major franchise record at the tight end position. To quote Ben again, “there will never be another Heath Miller.”

Therefore, the Steelers goal was never to replace Miller, but move in another direction. This was evident by the signing of Ladarius Green this offseason. Green is anything but the same style of players a Heath: Green was not known for his blocking and played over 60% of his snaps from the slot while playing for the Chargers in 2015.

With Green sidelined, the concerns grew that the Steelers would be lacking at the position, leaning on a 5th round draft pick in his second year, Jesse James, and an undrafted free agent who has bounced from several teams’ practice squads, Xavier Grimble.

Fans were asking, what were the Steelers going to do without Miller?

There was grumbling about Green being placed on the PUP list before the season started. It felt as though the sky was falling… again.

The Steelers dealt with injuries to major stars over the last few years, as well as the departures of many longtime players, such as Miller, Troy Polamalu, Brett Keisel and Casey Hampton. Steelers Nation already knew what it was like to not have a replacement waiting in the wings for those players, or when the heir apparents either failed to live up to their billing; worse yet, if they were injured and never had a chance to “live” at all.

However, we have seen flashes from James in his short playing time thus far. We saw our 2nd year man get into games towards the end of the 2015 season, as Miller mentored him on the “Steelers way” of playing TE. That way was always about blocking first, receiving second.

Lets face it: most tight ends are glorified receivers who can block. The Steelers never copied what you see other TE’s in the league doing, in trying to become a go-to pass catching option. Heath had his moments, and was clutch in many key times. He does own those aforementioned records, including receiving stats as a franchise tight end. Yet, he was never mentioned in the same breath as Rob Gronkowski, Jimmy Graham, or Greg Olsen.

Much of that was Heath’s “team first” mentality. He did what he did, and did it quietly. For the Steelers it’s all about the team victory: what can you do to help this team win?

By all accounts, it looks as though Jesse James has figured this out: and quickly.

James had an unremarkable preseason, earning the starting TE position with Green sidelined due to injury.

Now Green, who was a big story before the season began, is merely an afterthought.

In the opening game on Monday Night Football versus the Washington Redskins, James caught five-of-seven targets for 31 years. Though he was criticized for his blocking, he still had several key blocks to allow others to score. He also moved the chains, converting two key 1st downs. Though his longest catch in that game was 8 yards, he made a number of nice plays in traffic, and seems comfortable in his check-down role.

This past weekend against the Bengals, James added 3 more catches (on 5 targets) including hauling in a high pass for a touchdown. The play is reminiscent of the player he has, for all intents and purposes, replaced: Heath Miller. In fact, James looks and plays a lot like Miller; he is not the fastest player on the field, but he takes a hit and holds on to the ball to push through for yardage.

It appears that he has the faith of our coaches and our quarterback as the #1 option at tight end, at least for the time being. Look for the 6′ 7″ James to be targeted with regularity in the upcoming weeks, as Ben will need all of the weapons available as teams try and take Antonio Brown out of games.

Playing at home this weekend, the fans were still chanting “Heeeeeath!” when #81 Jesse made a catch. The calls were faint, the fans seem confused as to whether they should do it. Jesse doesn’t mind the “Heath” chants, calling it a “badge of honor.”  He can’t wait to hear it when we play Sundays at Heinz Field.

Even Charlie Batch commented that maybe “Jaaaammmesssss” should be the new “Heath.”

It appears that might be truer than originally thought.

This article was a collaboration between Terry Fletcher and Joe Kuzma.