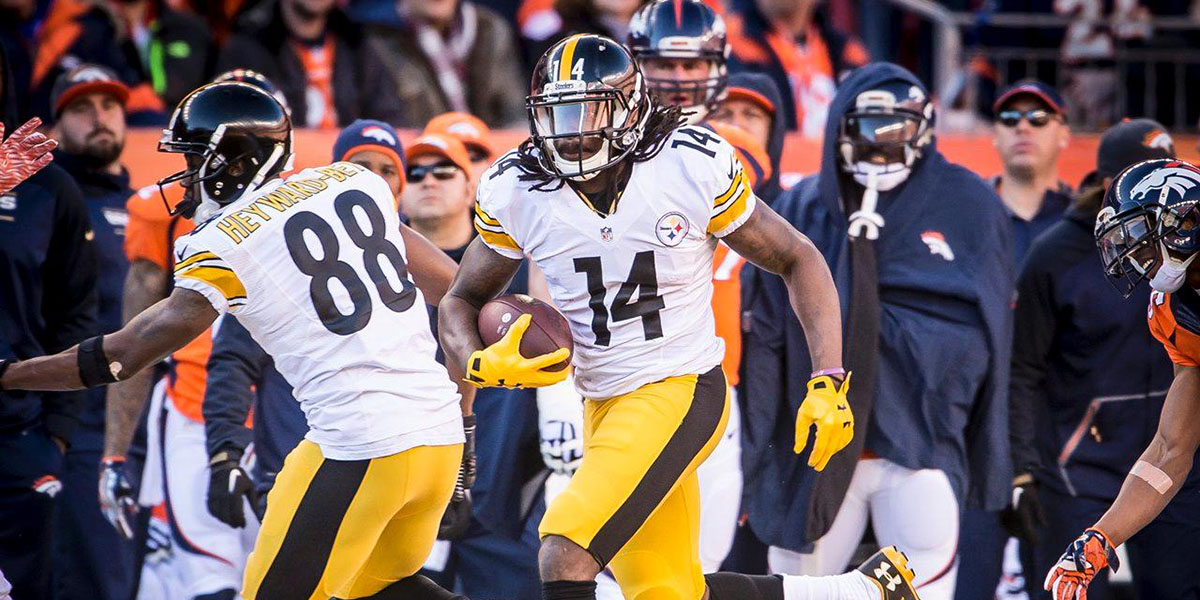 Remember last year, when everyone asked “Why did the Steelers drafted Sammie Coates?”

I was just as puzzled. I’ll admit, I felt the Steelers were already loaded at the WR position. They have Antonio Brown, Markus Wheaton, and Darrius Heyward-Bey.

Oh, and they had Martavis Bryant, whom we learned would serve a short suspension last year, then serve an entire year off this season.

The decision to bring on another speedy, decent-sized, who was actually compared to Martavis Bryant in his NFL Draft profile, looked like a wasted pick at first. Coates sat the bench behind those big-name receivers for most of the 2015 season, and was only leaned on to play in the Divisional Playoff game against the Denver Broncos, after Antonio Brown was ruled out with a concussion.

In that game, we caught a glimpse of Coates’ ability:

You're looking at the future of the #steelers Sammie Coates! https://t.co/oiJY1PLfW8

Ben Roethlisberger completed two passes to Coates in the game, one for 37 yards and another for 24 yards.

Then we had to wait half a year to see more from the 2nd year prospect:

One of few #Steelers #Eagles bright spots as Jones escapes pressure, connects with Sammie Coates on a tip-toe catch pic.twitter.com/IVrwsoXSiq

Granted, there were a lot of growing pains and griping over Sammie’s ability in the preseason, to which I told fans “wait and see.” (Because, after all, it was the preseason.) Still, there was concern over Coates’ play, which mimicked the aforementioned weaknesses in his draft profile:

When using the preseason, and even some plays in the first two games to judge Coate’s performance, it’s hard to argue many of the points made. However, his profile also listed a “bottom line” which is coming to fruition:

Big, fast and raw. Vertical wide receiver with the ability to hit big plays and have dominant games. Coates must be coached to trust his quarterback and run through his deep routes in order to reach his potential. He has early round traits and late-round receiving skills right now, but the upside will be hard to pass on and could pay off in a big way.

Those deep routes and big play potential have been on display in the Steelers first two games against the Washington Redskins and the Philadelphia Eagles, where Big Ben has connected with Sammie four times, for gains of 14, 42, 44, and 53 yards.

Two of those connections have been broken plays, where Coates created an opportunity for himself by separating from defenders and giving Roethlisberger a target to pass to.

@_BigBen7 has that way of "wowing" you… doesn't he? #Steelers pic.twitter.com/3lnB4VKMYK

Coates did the same against the Bengals on Sunday, connecting with Ben on another deep pass off of an extended play; but Coates was also a reliable target on designed players (where the above draft profile criticized his route running.)

#Steelers @sammiecoates11 is turning into the deep threat @_BigBen7 has leaned on in the past w/others pic.twitter.com/iT2IlvEQCK

Considering another knock on Sammie was “slow to gather and turn it upfield on catch-and-runs,” which we’ve seen debunked in the Denver game, the small window of opportunities this receiver has received thus far show a glimpse into his full potential.

That potential could blossom into something much more, as Martavis Bryant had many of the same criticisms in his profile, before the Steelers made him a fourth round selection in 2014:

Inconsistent hands — tends to double-clutch the ball and makes too many easy drops. Is not a polished route runner — is stiff in and out of his breaks. Lacks toughness desired to work the middle of the field.

With Markus Wheaton missing time due to a shoulder injury, Coates to receive the 3rd most snaps of the Steelers WRs through 2 games (65% against Washington, 47% against Cincinnati).

Wheaton’s return could eat into Coates’ playing time, as Eli Rogers has settled into the slot receiver role (earning the 2nd most snaps to AB thus far) but Wheaton will still need a game or so to get into “football shape.” It is also hard to turn a blind eye to Coates’ 38.3 yards per catch, which may have been more if not for a couple of missteps in the terrible Heinz Field weather on Sunday.

Therefore it will be interesting to see if Coates does indeed turn into the reliable deep threat that his predecessors, like Bryant and Mike Wallace, were before him.

I know it’s based on a small sample size, but there’s no reason to see anything but a high ceiling for the second year player.