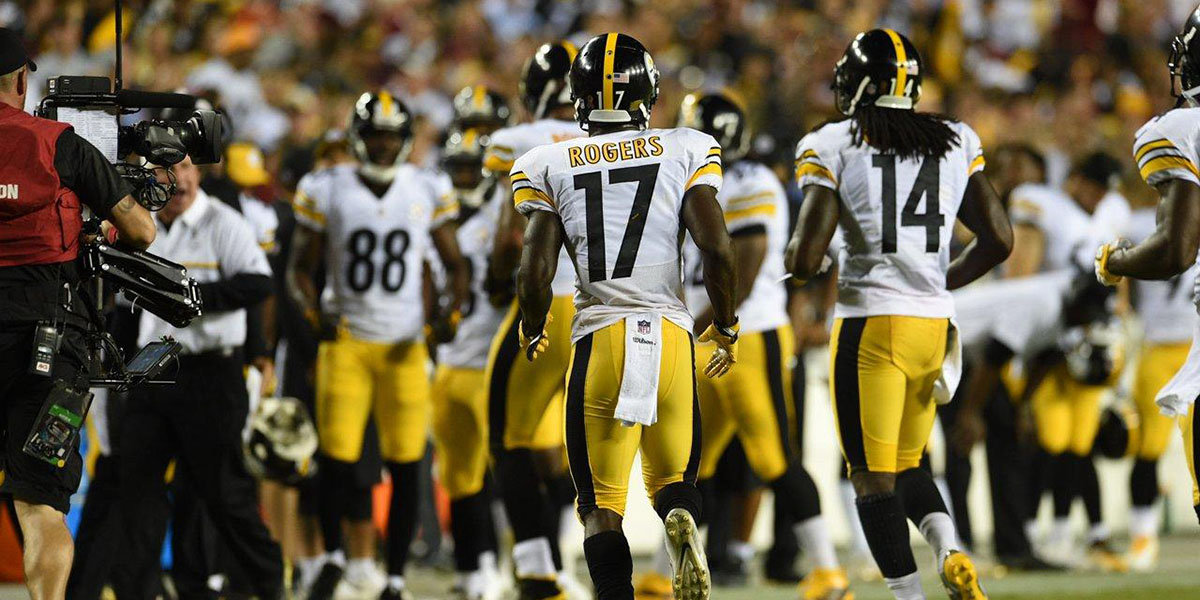 by Terry Fletcher (TerryinSoCalif) on September 22, 2016

At the beginning of what seems every NFL season today, media commentators are constantly saying the same thing: The Pittsburgh Steelers have the best receiving corps in the NFL.

Not that that’s a bad thing!

However, many of the other 31 teams may be asking themselves, “How is that possible?” when most of the Steelers receivers on the current 53-man roster were not 1st round picks.

Let’s review the current players on the Steelers roster, and where/how they came to the Steelers:

We can also include Darrius Heyward-Bey (DHB) to round out the receivers, as he was a 1st rounder for Oakland in 2009, but he is a big man compliment to the above players. (He is known more for his speed, than his hands.)

The Steeler’s current receivers were not considered the best-of-the-best coming out of college, but the Steelers have a way of making superstars and potential break-out stars as we saw on Monday Night Football against the Washington Redskins.

During the preseason, many felt that Sammie Coates, who only played in 6 regular games last season, would be the outside WR in place of Bryant during his suspension, but after a remarkable preseason and camp, rookie WR Eli Rogers has been introduced as our new slot receiver. He had a little trouble in the first quarter of the game, with some miscommunication between he and Ben that led to an unfortunate bounced-off-someone’s-body INT.

It was not costly, so that was the saving grace.

Rogers ended up with 6 receptions for 59 yards and a TD, while being targeted 11 times. The fact that we did not see him lower his head or get flustered from the early mistake, makes for a great potentially powerful weapon for Big Ben. The fact that he converted one of the two 4th down conversions Tomlin and Haley decided to go for, was key in keeping the game at bay from the Redskins.

WR Antonio Brown was his usual brilliant self with 8 catches, 126 yards and 2 TDs. He can catch anything you throw his way. If you look at his route running and the chemistry he has with his QB, he doesn’t even turn around to look for the ball, until he is ready and then it is just there for him. He knows.

As fun and exciting as it was to watch Brown wreak havoc on Monday night, the Redskins’ lack of resistance raises an important question: where the heck was CB Josh Norman? The Redskins made the first-team All-Pro the highest-paid corner in NFL history this offseason. Yet it was DB Bashaud Breeland who was tasked with shadowing Brown on 1-1 coverage?

Obviously that game plan did not work.

Even ESPN’s Jon Gruden (brother of Redskins head coach Jay Gruden) commented that Jay may be in over his head where Brown is concerned. “Can anyone cover that guy one-on-one? Nope.”

WR Sammie Coates, was a bit quieter than the rest with 2 catches for 56 yards; Coates had a key catch and block in the game, to allow RB DeAngelo Williams to score his second TD of the night.

It isn’t always about your own stats, but what you do to help the team win, and Sammie was right there doing all he could.

It should be noted that the wide receivers did have a little help from their continued history-making QB Ben Roethlisberger.

Big Ben does us proud every week, but he is also making stars out of the outstanding receiving corp.

Just wait until all the starters return: Markus Wheaton is expected to play versus the Bengals this weekend, and we should see more of DHB, who has put up good numbers against Bengals.

So, to answer the title question: do the Pittsburgh Steelers have the BEST Wide Receiving unit in the NFL?

If game one of the 2016 season tells us anything, it is that they have one of the best, if not the best for sure.