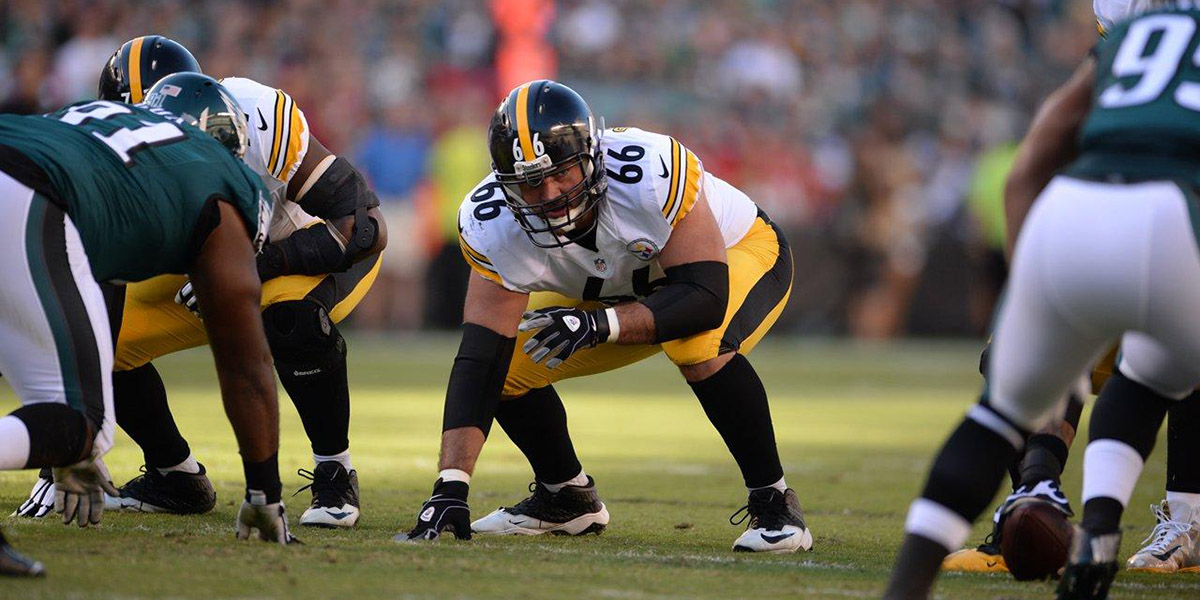 As I famously (or not so famously) like to say in instances like this: “and in other news, water is wet.”

Pro Football Focus (PFF) recently graded individual players from the Philadelphia Eagles 34-3 win over the Pittsburgh Steelers. In the article, several Pittsburgh offensive lineman received a low grade, due to a poor showing in the blowout loss. (See water is wet comment above.)

In defeat, QB Ben Roethlisberger was sacked 4 times, for 35 yards, and hurried an additional 7 times. Yet, the left side of the offensive line graded fairly well for the game. Three of the top five offensive grades for the Steelers were linemen. C Maurkice Pouncey finished with a 69.8 grade, while T Alejandro Villanueva scored a 68.2.

The most pleasant surprise was B.J. Finney, who scored the third highest grade with a 70.8, after replacing Ramon Foster (who was graded with a 65.7).

Finney is most remembered as the practice squad player who received a pay raise from the Steelers last November. Finney, who made the 53-man roster following the preseason, saw his first regular season reps on 5 plays with special teams during the Redskins. This was due to the Steelers offensive line remaining healthy, and playing every snap together up until Foster left in the second quarters of Sunday’s game against the Eagles.

With no prior regular season experience, seeing Finney hold up against tough competition is a welcome surprise.

Foster’s loss, however, cannot be downplayed. As pointed out in the opener against Washington, Foster maintains the cadence for Maurkice Pouncey to snap the ball, by tapping his thigh when Roethlisberger is ready. This helps Pouncey focus on the snap, taking away his responsibility of the offense’s utlization of a silent count in noisy away stadiums.

This may have factored into the offensive line’s inability to protect Big Ben, along with becoming a predictable pass-first offense which abandoned the run while playing from behind. In that manner, tt comes at no surprise that PFF gave low grades to those responsible for the hits on Big Ben; it was just surprising who those players were: G David DeCastro and T Marcus Gilbert.

2015 Pro Bowl selection David DeCastro secured a new long-term deal from Pittsburgh before the start of the regular season, affirming he is not only the future, but a fixture as the team’s right guard.

Right tackle Marcus Gilbert is another handsomely paid lineman who many peers consider to be a Pro Bowl caliber player in his own right.

That made the play of the right side of the line a bit of a shock on Sunday, which PFF graded accordingly: DeCastro recorded a 42.2 PFF score, after allowing 6 total pressures, 2 sacks, 2 hits and 2 QB hurries.

Gilbert marginally edged DeCastro’s poor showing with a 42.7 grade, allowing a sack, a hit and a QB hurry.

DeCastro also receives partial blame for the blocked field goal attempt on the Steelers first drive. In this clip, you can see LS Greg Warren is left blocking air after the snap, while an Eagles defender shoots the gap between Warren and DeCastro. David is double-teamed, and the deep penetration allowed Bennie Logan to get his fingers on the football.

Logan’s name pops up on the stats sheet again later, but it was Fletcher Cox who would strike with the first take down of Big Ben.

On this play, Marcus Gilbert is instantly beaten, which leaves DeCastro with two Eagles in his face, en route to the sack on Ben.

Once again Gilbert is beaten on this play, as his assignment runs into DeCastro, who then releases his block, giving up another sack.

While some excuses could be made for DeCastro up until this point, we see the 66 get pushed back on the very next play following the above sack, completely pushing the pocket into nothingness and giving up a sack to Bennie Logan, and allowing Cox to force the fumble.

On the final of the 4 sacks, DeCastro once again gets blown up at the line, while Marcus Gilbert fails to contain the edge.

Overall, we can admit this was a bad day at the office for the right side of the offensive line. Even when others (such as Pouncey) attempted to help, the Eagles defensive linemen had their way on Sunday.

I won’t be one to cry about this loss, as other professional football teams stock their rosters with players they feel will help them win and it’s in these cases when one (or several) players has a bad game, it can also be attributed to the opponents also having a good game.

It appears a little of both happened on Sunday.

Of course, we’d all like to see our quarterback upright all the time. I expect the Steelers to improve their pass blocking as the season continues; Ben was sacked a total of 20 times in 12 appearances last season. With 6 sacks relinquished in 3 games so far, the 2.0 sacks per game average isn’t terrible, and only giving up a pair of sacks, instead of 4, along with a supporting running game, would benefit an offense which struggled to find rhythm against the Eagles.