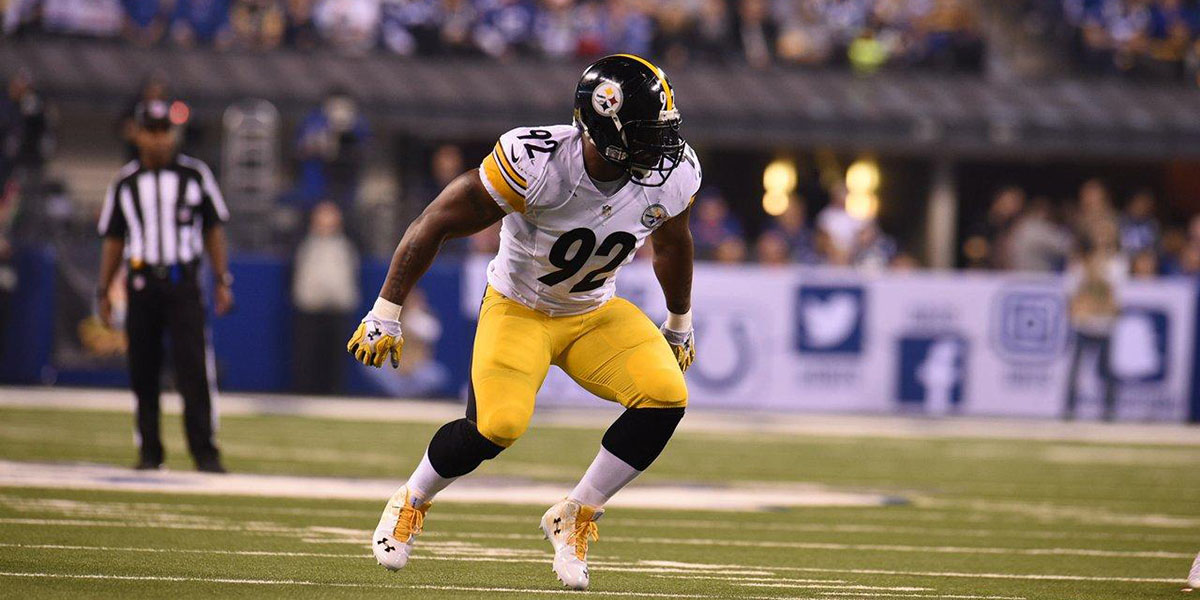 Film Room: How the Steelers defense dominated the Colts

First off, I hope all of you had a wonderful Thanksgiving with family and friends. There’s plenty to be thankful for, especially after the Steelers beating the Colts 28-7.

The score of this game could’ve been a lot closer after the final whistle, but the Steelers defense made sure to keep it a three score game.

Here’s how they made that happen:

Even though the Steelers were facing a career backup, they still made sure to make a statement early: very early.

On the first drive for the Colts, on the first snap, William Gay blitzed from the left side. Frank Gore tried to block him, but failed. Gay caused a sack fumble for a nine-yard loss (the Colts ended up recovering the loose ball).

Even though the Steelers didn’t recover it, it was still a great play call and great play.

Javon Hargrave was a major disruption for the Colts. This was no more evident than when the Colts faced a 3rd & 20 on their first drive.

If you watch the play develop, you’ll see Hargrave bull rush an O-linemen, and come off his block as he notices the running back run out of the backfield. He blows up the screen play for a five-yard loss.

Not only is this play amazing in normal speed, but it’s even better to watch in slow motion.

The Colts were able to maintain some success on their second drive. They had multiple plays of ten-yards or more, but that all came to an end on a 3rd & 1 on the Steelers 34-yard line: James Harrison, who was lined up against TE Dwayne Allen, went right through him and took Tolzien down.

I mean, it’s James Harrison, what else could I say? He’s still amazing.

With Harrison’s play, the Colts ended up attempting a 52-yard field goal, but it went wide right. The defense did their job, and got some help from Vinatieri.

To start the second quarter, the Colts were facing a 3rd and 6 conversion, but the Steelers defense would force another three and out… or would they?

The Colts pulled off some trickery and converted on fourth down. The Colts rambunctious punter, Pat McAfee threw a 35-yard pass to E. Swoope, who was stopped at the Steelers 8-yard line. The Colts got into the end zone one play later, with a Tolzien touchdown throw to Moncrief.

This was the only scoring play the Steelers allowed.

Towards the end of the half, the Colts were marching into Steelers territory. On 2nd & 11, the Colts had three wide, with T.Y. Hilton in the slot. The Steelers were in nickel and only rushed four, but two of them were William Gay and Sean Davis. Two defensive backs were taken out of coverage to rush, which would leave a LB to cover a WR.

Since William Gay was rushing, Lawrence Timmons was left alone with Hilton. That led to the speedy Hilton hauling in a 32-yard pass, while getting leveled by Mike Mitchell in the process.

That play put the Colts at the Steelers two-yard line.

On 3rd & goal, Tolzien faked the handoff and took off for the end zone.

You can clearly see the play was a designed run play. Tolzien didn’t look for anyone open, he ran immediately. As I watched it, I thought Tolzien was crossing the goal line, but Sean Davis made sure that didn’t happen: he laid a hit on Tolzien and stopped him for no gain.

The Colts went for it again on 4th & goal, but nothing came of it. Mike Mitchell made his presence felt again by forcing an incomplete pass.

The Steelers defense always seems to bend, but never break.

The 2016 draft class continued to make themselves known in this game. On 2nd & 9, Hargrave once again made his presence felt. The defensive tackle plowed through the center and left guard to take down Tolzien for a six-yard loss.

Hargrave hand his hands on those two linemen right off the snap.

It was simply amazing.

It’s great to see someone else on the defensive line, let alone a rookie, making plays.

Hargrave’s play was great, but on the same drive, the Colts managed to push the Steelers defense back with a 19-play drive that chewed up 10 minutes and 18 seconds.

On 3rd & goal, on the Steelers two-yard line, Scott Tolzien attempted to try to get into the end zone himself. I had to go back and watch this play over a few times, because I originally thought Tolzien didn’t see anyone open and just decided to take off, but that wasn’t the case.

This play was a designed QB draw.

As you watch it, you see three receivers lined up on the left, offensive, side. They start blocking two Steelers DBs immediately, and they don’t look back for the ball.

The Steelers defense stopped the Colts again when they went for it on 4th & goal.

The Steelers defense ended up sealing off the game with two interceptions, one by Mike Mitchell, and another by William Gay.

Overall, I’m happy with this defensive performance. First-year players are stepping up and making plays. Veterans like Harrison, Mitchell, and Gay are continuing to make plays and show the young guys the way.

I hope our beloved defense continues this trend, so that our offense can have more chances to score.