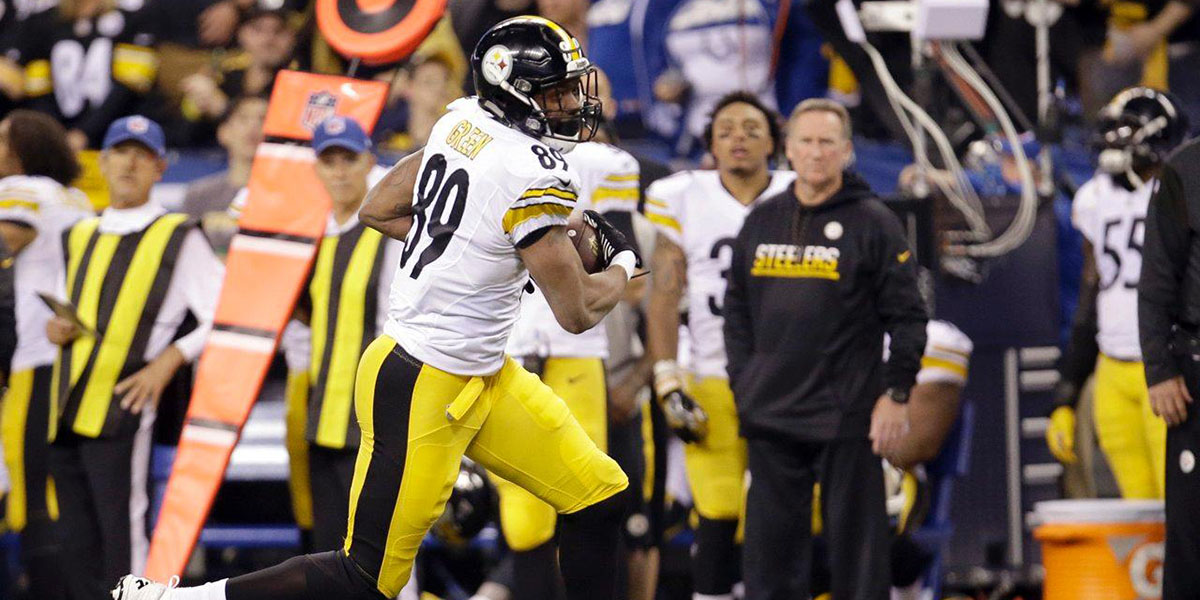 Ladarius Green is ALIVE! (And helping open up the Steelers offense)

by Terry Fletcher (TerryinSoCalif) on November 30, 2016

Okay, I don’t want to smite 2nd-year man Jesse James. For half of the season, we have been “okay” with James’ play, and his sometimes pedestrian blocking. Some of us forgot what a Green was supposed to bring to the field.

The 6-foot-6, 240-pound tight end came up big in the Thanksgiving night game against the Colts, with two clutch 30+ yard grabs. This is exactly how we pictured those Big Ben, long ball, rainbow-you-better-look-up-for-the-ball shots, over his shoulder when Green was signed during the free agency period: to put the Steelers in position to win games.

It was interesting to see the Colts lose track of Green. They must not have considered him to be a threat; Indy had a linebacker in man coverage each time he caught a pass (rather than a safety, or even much safety help).

Having this down-the-field target, with Antonio Brown doing what he does, and Le’Veon Bell being on fire in the running and passing game, will get this team hot for the playoff push in December.

Mike Tomlin always gives us great one-liners, and the most recent Tomlinism, “They Remember December” could not be more accurate.

As the Steelers stand tied record-wise in 1st place of the AFC North with Baltimore (the Ravens currently hold the tie-breaker) we need this new shiny “Ferarri” to be out of the garage and running at full speed, for Ben to have that needed weapon we’ve been missing most of this season.

Green running wild, along with Sammie Coates returning to full health (and also drawing the attention of the Colts defense) opened the game for Roethlisberger, and Antonio Brown.

Who is going to catch passes besides AB? Look no further than Green.

Apparently Ladarius was on a “pitch count” in his first appearances of the year, after coming off of the PUP list:

Todd Haley said Ladarius Green was on a "pitch count" (aka snap count) last few weeks. Expects him to be full-go vs. Colts. #Steelers

The rust is now diminished on Green, who played 14 snaps on Thursday, his most of the season. Green has already been targeted 9 times, catching 5 of those passes for 97 yards. His two receptions in the Indianapolis game went for 32 and 35 yards (67 total) busting the game wide-open.

As we head into a must-win situation going forward, and a big game against the New York Giants at home this Sunday, that performance can only help Green’s cause: according to CBS Sports, the Giants have allowed 16.1 YPC and one touchdown to tight ends over the last 4 games. However, in 3 of those 4 games tight ends have annihilated the Giants defense. Philadelphia’s Zach Ertz caught 8 passes for 97 yards, Chicago’s Zach Miller was held to 3 catches for 61 yards, but had a 34-yard long, and Cincinnati’s Tyler Eifert was also held to 3 passes, but gained 96 yards including a 71-yard haul. (The outlier? Gary Barnidge of the Cleveland Browns, who had a single catch last Sunday.)

If Pittsburgh can use their tight ends, Green, James, and maybe even David Johnson (if Xavier Grimble is not back to full status Sunday) could help open the field for Bell and AB.

The offense could carry the Steelers, and give our hard-working defense a bit of a breather.

And it all starts with Ladarius Green.