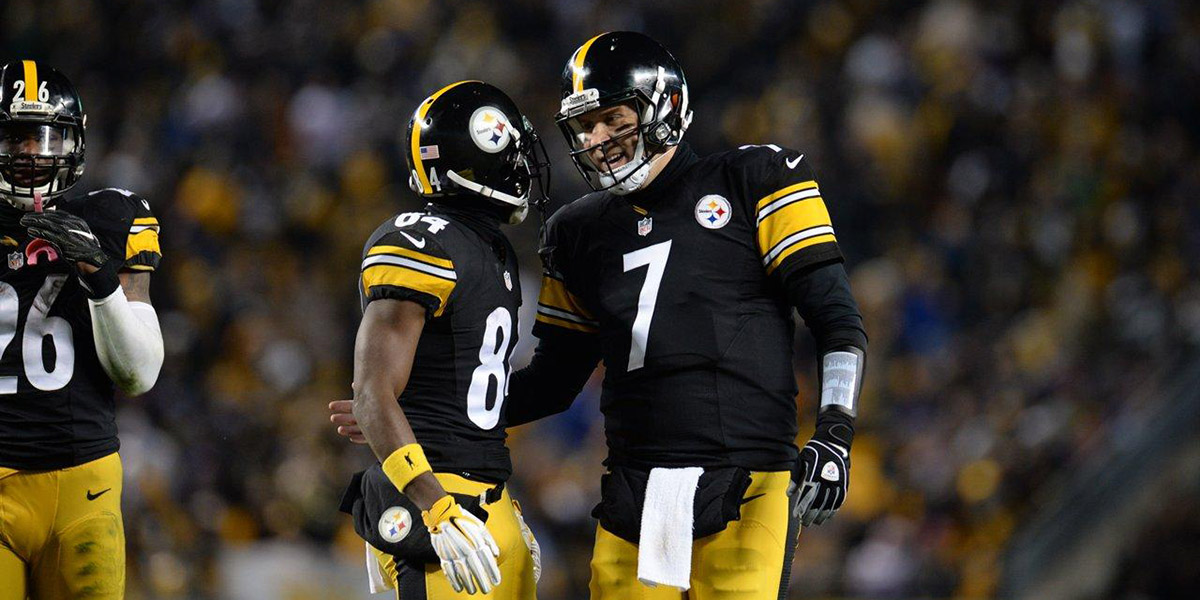 The Pittsburgh Steelers are officially riding a three game win streak, while the New York Giants played the most recent role in that success. The Giants were on a winning streak of their own (6 games) but saw that same streak snapped at the hands of Big Ben Roethlisberger and the Steelers offense.

In a game where there are more than a few players to mention, Pittsburgh’s offense came at New York’s defense in a multitude of ways.

Ben Roethlisberger, although just barley missing the 300 yard mark, had a solid performance. The quarterback spread it around fairly even, while adding two touchdowns to one interception. The numbers aren’t dazzling, but Ben had his share of impressive throws.

The Steelers offense was off to a bit of a slow start, thanks mainly to an early drop. However, after the defense forced a safety, Roethlisberger went to work.

On a vintage Big Ben style play, the quarterback found offseason acquisition, Ladarius Green, for a huge gain. The 37-yard completion would be a new season-high for Green, and his 3rd reception of at least 30 yards on the season. (He had two last week.)

Most NFL tight ends don’t routinely catch 30 yard passes. I think Pittsburgh may have a special talent on their hands.

This pass was beautiful to watch unfold for two reasons. First, Ben Rothelisberger delivers a perfect ball, and the second being Green’s awareness.

This shows great signs of Ladarius Green getting comfortable playing with Roethlisberger. The chemistry is building at an alarmingly fast rate, and I love it.

(Pittsburgh would later connect for a field goal, extending their lead to 5.)

With Green making plays, everyone should have assumed it would only be a matter of time before Antonio Brown got in on the action.

Jenoris Jenkins was tasked with the objective of covering AB (or at least trying to.) Jenkins has been a good addition for the Giants, but trying to eliminate Antonio Brown from a game has been proven near-impossible.

On a play where Jenkins appears to have great coverage, Roethlisberger fires a bullet to AB in the back of the endzone, right over top of Jenkins for the touchdown.

Ben and AB both do a fantastic job of extending the play.

Later, the Steelers would get a chance to run their two-minute offense in this contest, and it worked well. Roethlisberger got multiple receivers involved as he and the offense “dinked and dunked” their way into field goal range. Cobi Hamilton and Eli Rogers for instance, both accounted for first downs.

After a successful attempt from Randy Bullock, Pittsburgh led 14-0 at halftime.

Despite all of our best wishes, the Giants would eventually find the endzone. However, it was after that point, when the Steelers seemed to take full control.

The offense took the field, up only 7 points, but that margin wouldn’t stay that small for long. After a healthy gain by Le’Veon Bell (12 yards) Ben and AB would again connect on Janoris Jenkins. Not for a touchdown, but instead a masterfully ran comeback route for a crucial first down.

Brown gets Jenkins to bite and flip his hips, and Roethlisberger delivers the ball before Jenkins can blink.

Why was this first down, “crucial” you ask? Because it would set up Pittsburgh’s last touchdown, and arguably the most exciting touchdown of the game: tt was time for Big Ben to take another spin with the Ferrari.

On a well designed play, Roethlisberger would find Green for his first touchdown of 2016, and as a Steeler. Landon Collins, a safety for New York, appears to bite on the screen fake for Cobi Hamilton, and lets Ladarius cruise right by him.

The score literally looked too easy.

The Steelers and their fan base had finally seen what a healthy Ladarius Green can do for this offense. (And why Pittsburgh went out and got him!) Over the past two weeks, he leads the NFL in average yards per catch! Again, tight ends don’t normally do that!

Ladarius not only had his best day as a Steeler, but he had the best game of his career. The “Ferrari” as we call him, posted 100 yards (110) for the first time ever as a professional.

Don’t look now, but the Steelers may have signed this kid at the perfect time because he appears to be peaking.

After another dose of Le’Veon Bell between the tackles, the Steelers would tack on another field goal and close the game out at 24-14.

Bell had a fumble on the day which led to points, but other than thatm he had another Pro Bowl like performance. He tallied 118 yards on the ground, while also tying for the team lead in receptions with 6.

Antonio Brown and Ladarius Green also had 6 catches on the day. Earlier when I said Ben spread it around fairly even, I meant it.

I might still be excited from the win, and a tad bit biased, but “yinz” saw what I saw.

If the Steelers have Ben Roethlisberger, Antonio Brown, Le’Veon Bell, and Ladarius Green all operating at 100%, it’s hard to imagine a defense stopping them. Not to mention Eli Rogers, Sammie Coates, Jessie James, and Cobi Hamilton who all help out in their own way.