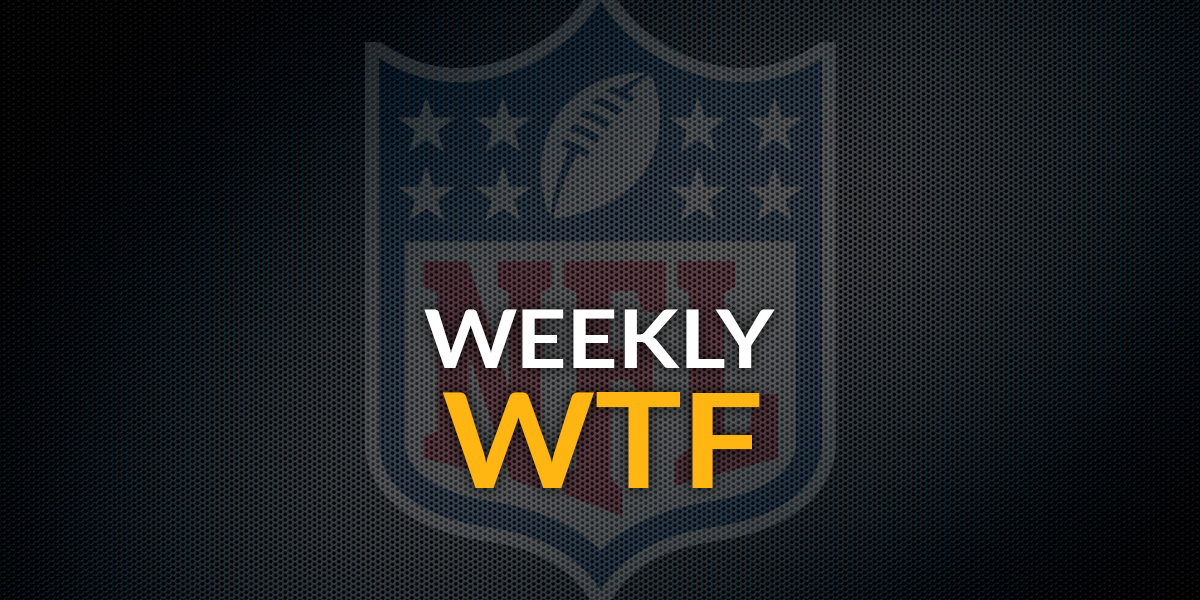 Week 13 WTF Moments in the NFL

by Terry Fletcher (TerryinSoCalif) on December 8, 2016

So my plan this week for my WTF file was to get ahead of my editor’s deadline (he can be brutal) and have it done before Monday Night Football.

Whelp, that didn’t happen! (And then I actually, painfully with the rest of the world, watched what had to be one of the THE worst MNF games I have ever seen.)

So… the Jets get a BIG shout out for the biggest WTF: 3 hours that none of us can get back.

The Jets 41-10 loss to the Colts was embarrassing. We saw Coach Todd Bowles yelling at players on the sideline, we saw missed catches, we saw dropped passes, we saw poor defense, and Colts players literally walking into the endzone for a TD, untouched.

It was uninspired football at best, and seeing backups like QB Scott Tolzien play 21% of the snaps (and not because Andrew Luck was unavailable) screams how one-sided this game was.

It was a mess!

Fishing for a new contract

Next is personnel decisions in the NFL.

I am not sure what the LA Rams, formerly St. Louis Rams (formerly LA Rams) see in coach Jeff Fisher, with his ongoing losing seasons and mediocre brand of football.

But apparently they see something, as Fisher was extended (rewarded) with another 2 years on his contract.

I guess even Hollywood celebrities do not have influence when it comes to NFL decision making that they’ve begged for.

To make things more interesting, former Rams great, RB Eric Dickerson, started off last week by publicly stating he was banned from the team’s sideline. Dickerson has been largely involved in the reinvention of the Los Angeles brand, having formerly been a big part of the football culture in the nation’s second largest TV market.

Needless to say, a ban on a player of his caliber would send a rotten message to Rams fans. (Kind of like, if the Browns banned Jim Brown from games.)

However, the Rams front office, and even Coach Fisher, claim Dickerson wasn’t banned.

Oh, then Fisher gets his contract extension, and Dickerson publicly berates the decision!

The next one is actually a sad WTF, but I respect Carolina’s coach Ron Rivera more than anyone for not allowing his “diva” QB Cam Newton (and the reigning NFL MVP) to break a team rule without consequences.

The Panthers took the field for the first series with Derek Anderson under center, and no one knew why: Newton wasn’t on the injury report.

Cam, known for his crazy get-ups in press conferences, broke the team rule when he “forgot” a tie for their plane ride to Seattle for the Sunday Night Football primetime game.

Rivera only benched Cam the first series, and he returned to play the rest of the game.

Coach Rivera knew this was a national TV game, and not having their franchise QB in the first series would not go unnoticed. He was quick to respond to the media afterward:

“No matter how many Pro Bowl appearances or corporate sponsors you have…. you are treated like everyone else on this team…”

The Panthers ended up losing the game 40-7.

Other little WTF things happening around the league

Other minor WTF moments included the benching (yet again) of Colin Kaepernick (do we really care?) the snow games in Green Bay and Chicago that were fun to watch, a mess for the officiating again… but the WTF of the week comes from the New York Giants and Pittsburgh Steelers game.

(Editor’s note: this should be good!)

WTF of the week

The Steelers did an awesome job, continuing their win streak (now at 3) with a 24-14 win over the Giants, keeping pace with the Ravens in a tie for the AFC North lead.

This win was also against a Giants team that had won 6 straight games in a row.

But the WTF tone of this game comes of the two flashy (and yes, diva) wide receivers on either side of the ball.

First, Antonio Brown and Odell Beckham Jr are the stars of their teams.

We all know this. They make great plays, catches, and clearly are the impact guys when it comes to team wins.

Odell is known more for his one-handed catches, and Brown more for his YAC’s (yards after the catch) but they were together all weekend ,and some things just do not sit well with me. Maybe it’s because I prefer the throwback NFL players that played like James Harrison still does (with a meanness and an angry edge to do what it takes to beat the other team).

So when I see Odell and AB (or who now wants to be known as Ronald… WTF?) playing around, snap chatting, and laughing the night before the game, it makes me wonder: how the game will go?

I know this goes on way more than we realize, and some players respect one another, etc. I don’t know, I suppose I like to prefer to not know those things, and pretend they really do want to beat the snot out of each other?

Then during the game, remember guys: you are on TV! AB makes an in-the-air grab of that pass from Ben, gets one foot down, and one elbow/butt in, for the touchdown, and Odell is on the Giant’s sideline applauding, and laughing, in appreciation for the catch.

Okay, yes I get it, it was a great catch, but dude… he is putting points on the board against your team!

Everyone is watching you applaud this effort on national television, as your team is losing.

After the game they exchange jerseys… we saw that coming.

Looks like everyone had a great time at the game, win or lose… WTF?

I miss old school football. This feel good stuff is getting so sweet, I have a cavity from this weekend. (Ew.)

Next week we are in Buffalo, where there’s an 80% chance of snow in the forecast.

Ben said at his press conference “That sounds like fun.”