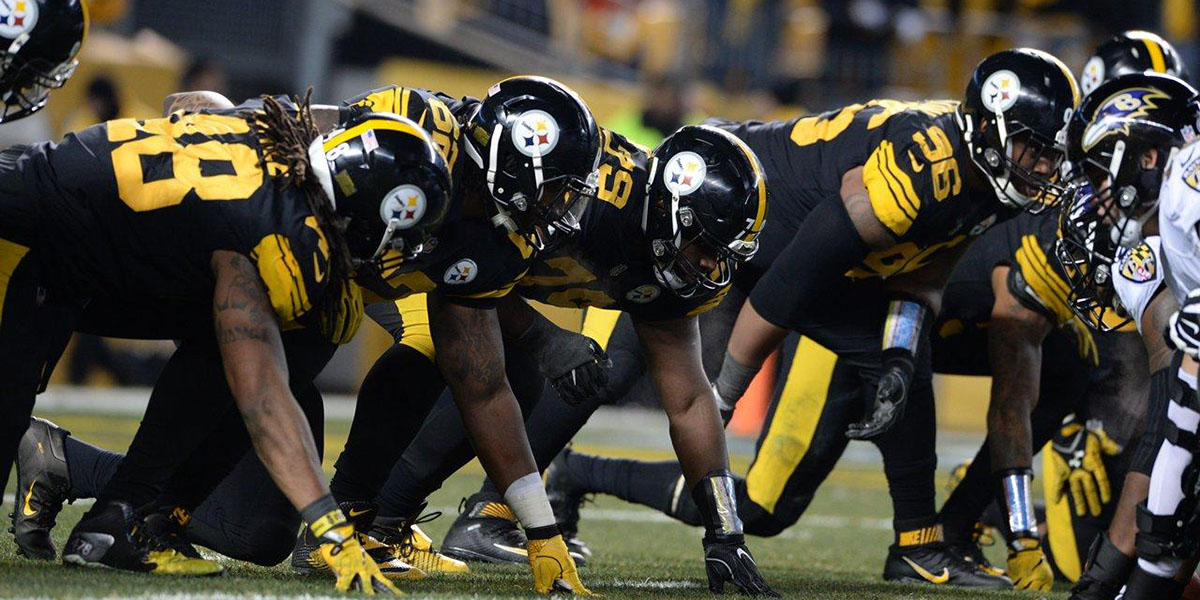 Could we have asked for a better Christmas Day present Nation?

I’ve watched that series of plays over and over during the hours since the Steelers clinched the AFC North, and the number 3 seed in the AFC. I think

I could watch it all day.

It does not get old!

If this wasn’t the game of the year, I’m not sure what was.

The fourth quarter began with Justin Tucker kicking a field goal to give the Ravens a 20-10 lead, and I’m sure much of the Nation wasn’t feeling optimistic.

Give the Ravens credit (even though none of us want to): they drove methodically down the field, and Juszczyk takes it in from 10 for the TD.

That was too much time.

Let’s look at the Good, the Bad and the Ugly from Sunday’s game.

Ben had a bit of a Jekyll and Hyde thing going on Sunday. We got to see instances of “Bad Ben” (two picks) one of which I think was maybe not his fault: a tough throw after having turned your back on the play, and one of which was just bad.

But by the time the fourth quarter came around, all we had was “Good Ben”.

On the last two drives Ben was 14 of 17. And remember, that includes two clock killing tosses into the ground. That means he was more like 14 of 15.

That my friends is precision.

That is Great Ben.

Go back and watch that final drive (it’s in the highlights on Steelers.com) and watch Ben move in the pocket. He was extending the play; he was Ben being Ben.

Look, let’s be honest, after that second pick I was ready to put Ben in the Ugly section of this piece today, but man, he came back and made you forget those picks.

I know Joe Kuzma did a write up on this, but guess how many 1st, 2nd, 3rd or 4th round picks caught passes on that last drive?

The highest draft pick on making a play on that drive was Jesse James – a 5th round pick.

I’ve said this before, and I’ll say it again – Ben makes his receivers better. (He just does.)

Want another fun fact before we move on?

Guess who has the most game winning drives since 2004?

The man is clutch.

Does anything more need to be said? (Oh yeah, two TDs: one rushing, one receiving.)

All this against the number 2 rushing defense in the NFL.

Any of you haters out there still think we should trade him, cause you know, he’s so injury prone… hello?… HELLLO???!!!

The receiving crew. It wasn’t just the Antonio Brown show: go back and read the specifics of that last drive.

Add in Le’Veon Bell to this receiving group and include the X-Man (Xavier Grimble) and Ben hit 7 different receivers.

It does bother me that we don’t have a definitive number 2 receiver, and it is worth noting that Ladarius Green didn’t play yesterday.

All that means is that we can get even better.

Le’Veon calls the O-line the “Goon Squad”, and that multi-million dollar investment the Steelers have made in this group is really paying off.

They were great. They’ve been great.

Our D-line had issues, which is no surprise because of the missing parts, but the O-line was dominant.

This wasn’t some second rate D-line they were going against.

And the Ravens were not missing tackles.

And Ben was sacked how many times? Exactly Zero. No times. Nada. Zippo.

Mike Munchak may have been the best hire the Steelers have made in the past 10 years (since they hired Tomlin).

Maybe I should say “The Coaches” because I think this coaching staff is symbiotic. They work well together. They communicate. They truly complement each other.

We all know Coach Tomlin, and the coordinators, Todd Haley and Keith Butler, but there are more guys doing great work here. James Daniel is the tight ends coach, Randy Fichtner is the QB coach. Carnell Lake is the defensive backs coach. John Mitchell is the assistant head coach, and more importantly the Defensive Line coach. Jerry Olsavsky and Joey Porter have the Linebackers.

And after all the great play by wide receivers, let’s not forget Richard Mann.

Look, I’m in too good a mood to go off too much, but two things bugged me. One was the third down defense. The Ravens were 9 of 17 for 53%. It wasn’t horrible, but it wasn’t good. They allowed too many conversions.

Yeah, I know, one was on a bogus penalty against Ryan Shazier, but I’ll get to that later (C’mon, you know I will!).

We will need to do better on third down as we move into the second season. But hopefully the return of Stephon Tuitt will help with that.

It’s actually really hard to call yesterday a slow start. We drove right down the field. I know we all were thinking “Oh this is going to be a great day!”.

But after that first drive, we essentially did nothing.

We put up 7 points in the first quarter on that first drive, and then could only come up with 3 points until the fourth quarter. Penalties got in the way, and of course so did those two INT’s.

As Coach Tomlin said, they were “kicking their own butts”.

We do that too much. Maybe we could, you know, kick our own butts in the pre-game warmups or something, and then you know, focus on the other guys for the entire game?

The tackling was not good.

How many tackles does Steve Smith break? (I counted 2). I started having flashbacks to Mike Wallace in the first game, but luckily Steve Smith is slower than Mike Wallace.

Tackling was definitely an issue, and it hasn’t been for a while. I hope this is the game they still had left in their system, and they tackle better moving forward.

I hate them all. They stink.

I don’t even want to talk about it. I mean I don’t. But you can only watch Deebo get literally mugged, tackled to the ground so many times. You can only watch another Steelers receiver get his facemask tugged on (AB on the last play!) and no flag be thrown. You can only wonder at what the refs are looking at or thinking about when they call that unsportsmanlike conduct on Shazier because the Raven’s player lowered his head to go at Shazier?

Sometimes I think I might just be able to throw my foam bad-call brick hard enough to break the TV.

One more game, and we enter the world of the Wild Card round of the playoffs.

Yes, it was a dream that maybe we could get the number 2 seed, and that wonderful bye week. But the Colts managed to suck bad enough to drown that dream.

I’m sure we are going to hear about the best scenario for the Steelers, and in my mind it goes like this:

Win against whomever you play. Period.