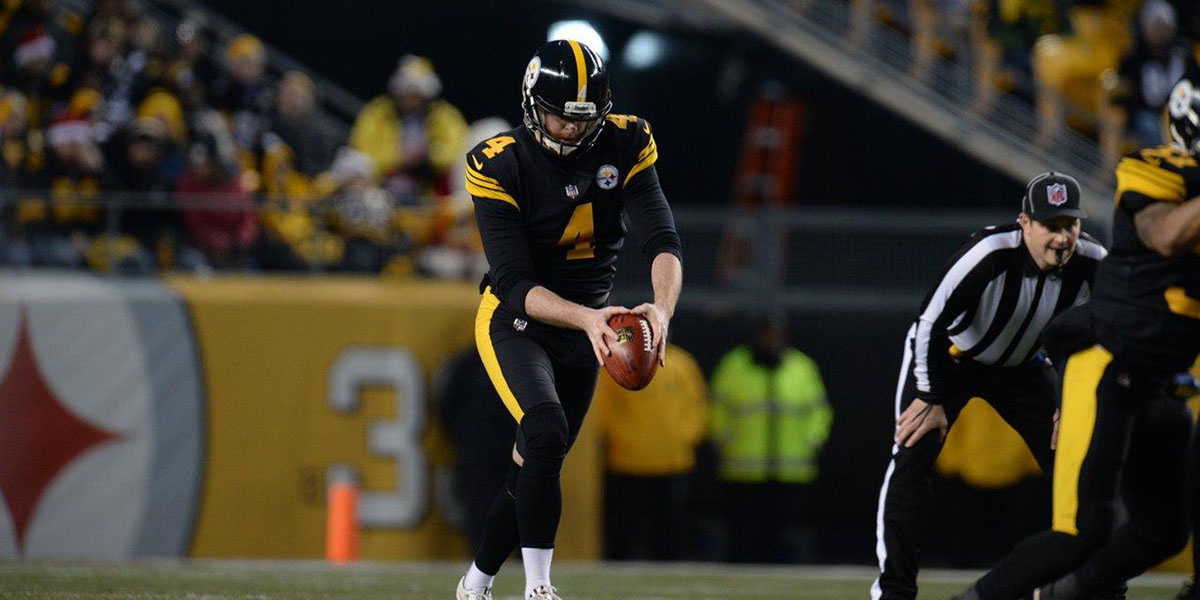 For weeks I had warned about special teams play, where the Steelers were (barely) getting by with subpar play.

In a game with the AFC North division on the line, things went south right out of the gate: literally, on the opening kickoff.

Chris Boswell opens the game with a “sky kick”, intending to get the Ravens to start with a field position worse than the default 25-yard line starting spot, should there be a touch back. (As mentioned every week, this a new tactic in the NFL with the change in touch back field position being moved up from the 20, to the 25 for 2016.)

The kick goes out of bounds, which is a 15-yard penalty. The Ravens end up starting on their 40 for the first series of the game.

Especially not good when the opponent has a kicker who routinely makes field goal tries from 50+ yards. The Ravens just need one or two decent gains, or a sustained drive to put points on the board from their 40, versus doing some from their 25 (or worse).

Luckily the defense was ready for the task at hand, and forced a 3-and-out on the game’s opening possession. Still, Baltimore “gained” yards which put the Steelers offense in a “worse” field position when they received the ball. (Their own 13, to be exact; following a Sam Koch 27-yard pooch punt out-of-bounds.)

There isn’t much to say about the punt return game, as Baltimore’s tactic was to keep the ball far away from Antonio Brown. AB would fair catch one of Koch’s three punts, with the other two going out-of-bounds.

For the Steelers, Jordan Berry punted three times. One of those ended with a fair catch by Baltimore returner Michael Campanaro, while he returned the other two for a combined 25 yards: 14 yards on one, and 13 on the other.

While a decent return, the directional punt helps Pittsburgh move the needle 41 yards in the field position battle, following a solid tackle from special teams ace Tyler Matakevich. (Baltimore would start at their own 27.) The Ravens would end this drive with a botched field goal snap, and no points.

I’d say that has less to do with the Steelers special teams play than the Ravens own mistake, but I’ll accept it as a victory.

Boswell would get another opportunity at a sky kick when the Steelers closed the scoring gap to within three points: yet another kickoff that would go out-of-bounds, and start the Ravens out on their 40.

Apparently, the Steelers said “enough” and Boz’ next two kickoffs would sail out of the endzone for touchbacks.

Yet, the double-edged sword of trying to force the opponent to start their possession closer to their own endzone sometimes pays off. I’d like to say the one instance of stopping the Ravens short actually worked in the Steelers favor; a 19-yard return from the 0-yard line to Baltimore’s 19 ended with a field goal conversion, following a sloppy defensive effort which yielded a 44-yard play to Steve Smith Jr.

Obviously there’s nothing special teams can do about that: they set the table for the defense.

Luckily, no major damage was done on either of the two kickoffs which went out-of-bounds, and were flagged. However, Pittsburgh’s special teams must tread lightly going forward, because they may not get as lucky should they give similar field position to, say, the New England Patriots, in the postseason.

Edit: I forgot to mention the Steelers own kick returners… Cobi Hamilton reached the 24 and 25-yard line on his two returns, but Fitzgerald Toussaint, for some unknown reason, thought it would be a good idea to take out a ball from the -3, rather than kneel and the offense starts from the 25.

Instead, he gets stopped at the 20.

Statistically, if you’re into the analytics of football, that extra 5 yards is a near 4% increase in probability for scoring on drives that start at the 25, rather than the 20.