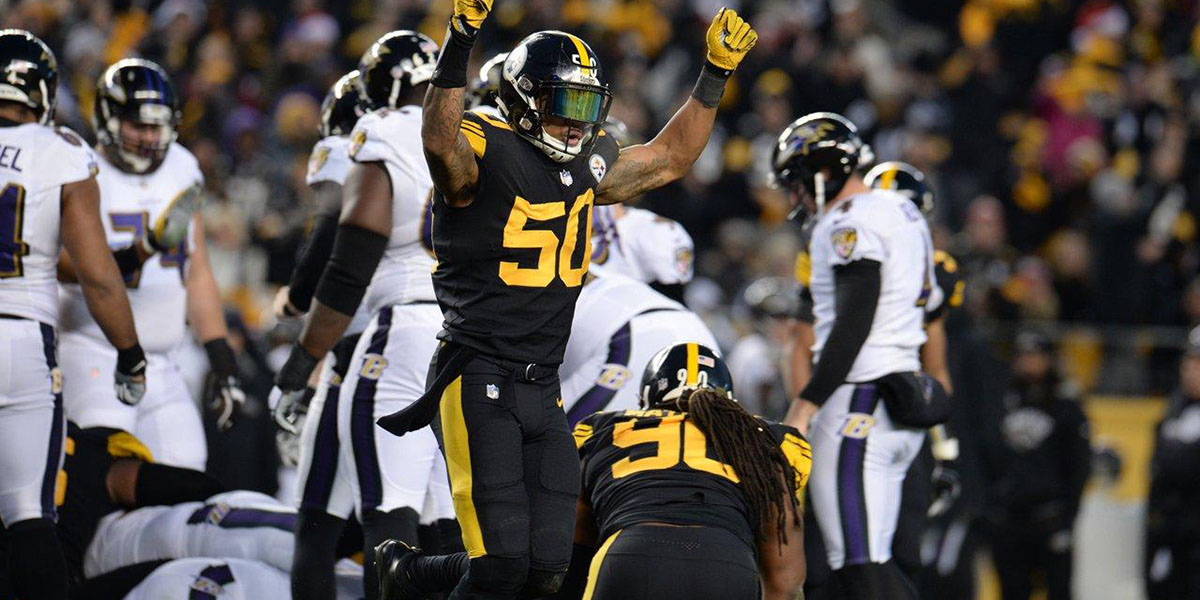 Film Room: How the Steelers defense got things done against the Ravens

The Pittsburgh Steelers defeated the Baltimore Ravens to become kings of the AFC North.

This was truly one of the things I wanted for Christmas, and I’m sure the rest of Steelers Nation wanted the same thing!

By the way, could we all just agree that the Steelers color rush uniforms are the best in the league. (Cause they are!)

We’ll start things off this week talking about a rookie again, which isn’t hard to do with 3 new players all making plays. We’ve mentioned Artie Burns and Sean Davis, but this time let’s talk about another rookie: Javon Hargrave.

Hargrave has been making a statement on why it was a good decision for the Steelers to pick him in the 2016 draft. He’s been a disruptive addition to the defensive line, and he continued that trend against the Ravens on Sunday. Below you’ll see Hargrave create pressure and force Flacco to throw the ball early, which caused an incompletion.

79 has a motor that doesn’t stop! He creates pressure throughout the game, manhandling the Ravens’ Jeremy Zuttah.

As you’ll see in this clip, Hargrave does just that, later on in the first quarter.

Hargrave creates pressure to disrupt Flacco’s timing, and forces him to check down to Kenneth Dixon.

Also on this play, notice number 96, Leterrius Walton, who recognizes the situation, breaks off of his block, and contains Dixon to a 1-yard gain.

It’s nice for defensive linemen to get sacks, but most of what they do isn’t “flashy” by NFL standards. This play illustrates how well young players like Hargrave (as mentioned above, a rookie) and Walton (a second-year, sixth round pick) are doing in place of defensive cornerstones Cameron Heyward and Stephon Tuitt.

Moving on, I know everyone noticed this next play!

Lawrence Timmons comes flying in on a “Fire X” blitz and levels Flacco for a sack. The play resulted in a 10-yard loss for the Ravens.

Timmons has been playing out of his mind lately. (I hope the Steelers find a way to keep him this off-season.)

Now, we’re happy the Steelers won and secured the 3 seed in the playoffs, but there’s one thing the defense needs to clean up: tackling.

The Steelers defense had way too many missed tackles in this game. That’s a ‘Captain Obvious’ statement here, but we very well could be going to Foxborough, Massachusetts to play the New England Patriots, which is a team, obviously, that we can’t afford to have missed tackles against. (One of those missed tackles resulted in a 44-yard catch-and-run by Steve Smith Sr.)

However, there were some stellar tackles as well in this game. This particular clip is a combination tackle by Artie Burns and James Harrison.

Burns really makes the most of this attempted screen pass to Mike Wallace, as the cornerback fights off his blocker and delivers a stiff hit, while Harrison joins in with the assist.

And while we’re talking about rookies, no film room would be complete without mentioning Sean Davis.

This was a near heart attack moment on a crucial 3rd-and-3 from the Pittsburgh 4. Davis correctly reads the out route ran by Ravens TE Darren Waller, who nearly comes down with the catch, if not for a well-timed play on the ball, as Davis knocks it out of Waller’s hands, while also containing him to the boundary lines (had Waller come down with the ball, he may not have maintained possession in-bounds.)

Overall, I thought the Steelers defense made stops when they needed to. The likes of Artie Burns, Sean Davis, and Javon Hargrave are maturing right before our eyes.

When I saw Burns make a play or just a tackle, his body language spoke like he was a five-year vet. He’s got a certain swagger about him that most first-year corners don’t have. It’s awesome to see.

I’m happy that our beloved Steelers sit at the top of the AFC North and are looking very good going into this year’s playoffs.