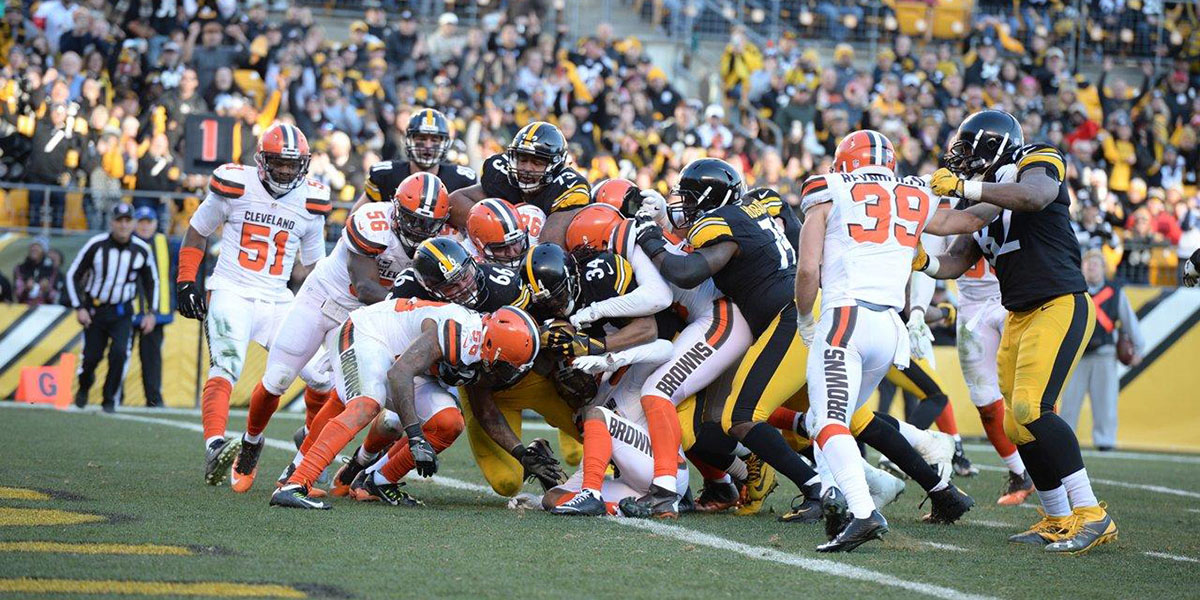 The Good, Bad and the Ugly: Browns vs. Steelers

Seven in a row, Nation!

Sunday’s game wasn’t the most beautiful example of football execution, but the result sure ended up looking good. The benefits of yesterday’s victory over the Browns far exceed the simple addition of a game in the win column. This team dug itself a hole, and was forced to find a way to get out of it.

That meant requiring above-the-line performances from guys who are role players. That kind of experience cannot be overvalued. It’s critical as this team grows together and becomes better.

And they are getting better. Every week.

The Steelers have won 7 in a row, and the scary thing is, I don’t think they’ve peaked yet.

How scary is that?

When you can find the grit and determination to win a meaningless game, when you can fight for a victory simply because you choose to win rather than lose, that’s the kind of confidence that is required for a real run at our 7th Lombardi trophy.

To quote Ike Taylor – This team is “Swaggin!”

Let’s get to the Good, Bad and the Ugly from Sunday!

Landry Jones earned himself a second contract yesterday. (Well, you know, unless some team decides to pay him stupid money and he decides to take it).

I hear you out there. You Landry “haters”. I was trolling the forums and Facebook groups Sunday, and I know you aren’t convinced. Before yesterday’s games there were several “this is the last game for Landry Jones” articles, and I posted “don’t you believe it” in a couple of threads.

What does this guy have to do to prove he’s a capable backup?

I don’t know about you, but it sure looks like Landry did better.

I (as everyone here at SCU knows) am not a Landry fan. I’m not a Landry hater. I think he’s perfectly fine for what he is expected to be: a backup quarterback.

On Sunday he was better than that; and if you can’t admit that to yourself, well, that’s more on you than it is on him.

Landry engineered a fantastic OT victory, and he made some throws during that game that were, well, as good as any Ben could make. He was better than anyone (including myself) expected him to be.

(But you know, it was only the Browns.)

Had a huge return, catching a long pass from Jones, and arguably having the play of the game (by stripping the ball for a fumble, and touchback, following Landry’s interception).

I had so much to say about Hey-Bey, that I put it in another article.

The Rookies (And not just Sean, Artie and Javon)

Artie, Sean and Javon did their part, no doubt, but it wasn’t just their performance which helped the Steelers win.

Sean Davis lead the team with 9 tackles, had a sack and a fumble recovery.

Artie Burns had 8 tackles a pass defense and very nearly a pick (that I think would have been a pick six).

Javon Hargrave had two tackles, one for loss, and definitely continued to be a force in the middle.

But there were other contributing rookies yesterday!

Demarcus Ayers had 5 receptions for 44 yards, drew another PI that was big, and scored his first NFL touchdown.

That means that every rookie still on the Steelers (and not injured) made contributions yesterday.

And there were a couple of other guys who really can be categorized as rookies in terms of experience who also came up big yesterday.

Eli Rogers continued to improve, and led the team in reception yardage (61 yards on 6 receptions). He was perfect 6 of 6, catching every pass thrown his way.

Cobi Hamilton continues to make his limited receptions count. He only makes critical catches! He had 3 catches yesterday, one picked up a first down on third and long, and another was the game winning touchdown.

These are all young guys, and they are making much needed contributions.

I think enough has been said about our “cheerleader” head coach. I don’t care how he is doing it. The team was flat yesterday to start that game. Hell, you can understand why.

Tunch and Wolf were talking about this on their show, and Tunch said that “no matter how hard you try, when you’re playing a game like yesterday’s, the idea of it being meaningless eventually creeps into your psyche”.

It showed in the first half of play; but the second half was different.

They came out, and they played better football, more “inspired” football. No, it wasn’t perfect, and there are some things to call out as “bad”, and maybe even ugly, but it was decidedly better than in the first half.

And I call that coaching. Something was said to these guys at half-time. Somebody took them by their face-masks and said “This is not acceptable.”

I would venture it was the entire staff as a whole, but I would also bet that the loudest voice among them belonged to Coach Tomlin.

We didn’t light up the field on our first drive of the third quarter, but we did get a first down, and flipped the field, and then the defense responded by forcing a 3 and out.

They played better, and that is what a coaching staff is supposed to do.

No major injuries to starters. We go into next week’s wildcard match-up essentially as healthy as we’ve been all year. That is definitely a big deal.

Tackling (Or lack there of)

I said in the SCU Duel Opinions piece that I hoped we’d clean certain things up in this game. One of them was tackling.

Multiple guys missed on Isaiah Crowell’s 67-yard scamper. If the first, or second tackle gets made, Crowell might not get have a 100-yard day, and we wouldn’t be complaining about the rush defense.

In point of fact, the reason I’m not calling out the rush defense; the problem isn’t that we weren’t getting there, or getting off blocks (except maybe Jarvis Jones, but I don’t want to pick on him).

It’s that we weren’t making tackles.

We make some of those misses, and the rush defense will all of a sudden look a lot better.

They need to improve this over the coming week, because we all know what Jay Ajayi did last time. That cannot happen again.

To give us a nice easy road in the playoffs, and to force a legitimate contender to play the Patriots in the second week, it would have been nice to either have the Chiefs lose, or the Raiders win.

That means, if we win this week, we have to go to Kansas City. Not the end of the world – heck, the Titans won there.

It also means that the likelihood of avoiding a trip to Foxborough has dwindled to a micron. The Raiders looked abysmal on Sunday, and the Texans didn’t look any better. No matter who wins the wildcard game between the Raiders and Texans, they are likely going to be nothing more than fodder for the Patriots.

I have to admit, while I’d have much rather avoided this path, if we can get there (which I think we can), there would be something poetic and sweet about beating the Patriots at home to go to the Super Bowl.

Hey, we have to win in Foxborough sometime, why not this year?

I’m not going to go into detail.

It got better as the game progressed, but still, 8-15 for 53% isn’t very good. The Browns did their best imitation of the Patriots, darting quick passes for short gains repeatedly, and it worked. That is troubling. This needs to improve, and maybe with a returning Stephon Tuitt it will.

This is an area that needs work, and I’m sure it will be a point of emphasis.

Next Sunday, 1:05 PM, Steelers vs. Dolphins in Heinz field. We need to channel the Spirit of Vengeance and get our flaming skulls ready! The Dolphins embarrassed the Steelers in Miami.

It’s time to return the favor.