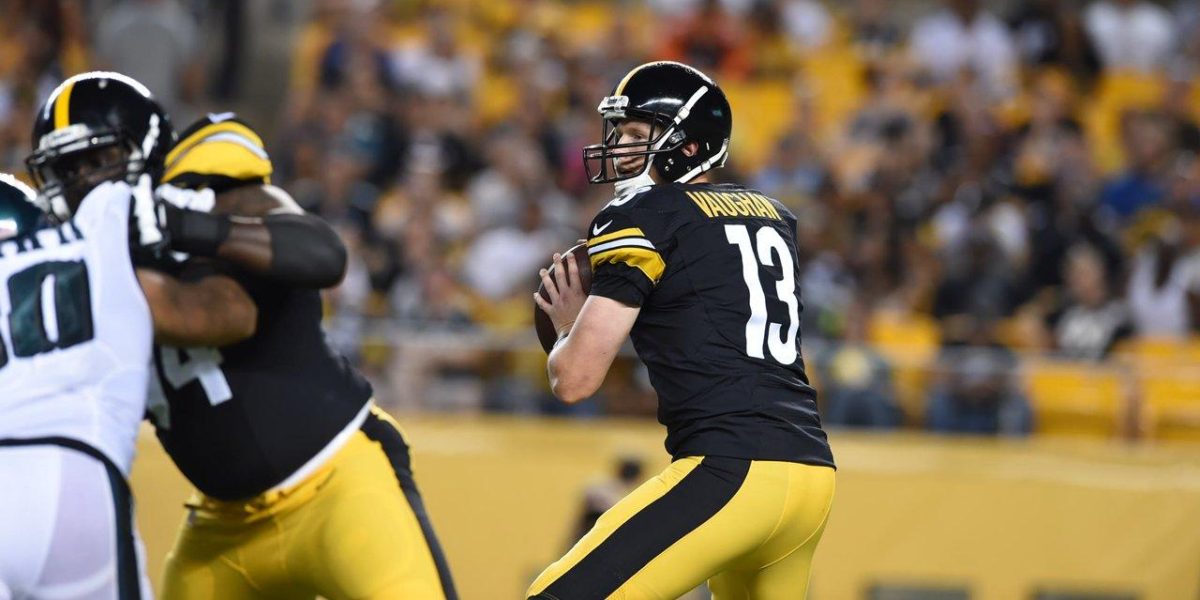 I’m not sure I want to define exactly what “Pick Party” means, as it may open some sore wounds from the 2016 preseason.

For those that had forgotten about this game, it’s the one where Landry Jones was chastised for throwing 4 interceptions, en route to a rout by the Eagles, who shutout the Steelers 17-0.

The game was incredibly ugly, as Pittsburgh either punted or turned the ball over. Like the previous week, a slew of starters sat out, such as Ben Roethlisberger, Antonio Brown, Le’Veon Bell, and DeAngelo Williams.

Other injuries still concerned the Steelers as well. Markus Wheaton still hadn’t seen the field, Bud Dupree‘s status was dimming, and first round corner Artie Burns had yet to make an appearance in a Steelers uniform. And of course, no Ladarius Green as of yet.

Some positives were seeing Maurkice Pouncey finally get some reps, for the first time since his season-ending injury in the same week a year prior.

Outside of that, there was a lot of ugly in this game. If the Steelers weren’t turning the ball over, they were punting. Jones struggled, but also in part due to his supporting cast around him. Sammie Coates ran a bad route, and never fought for the ball, which resulted in a pick six, the first of Landry’s four on the evening.

First turnover of the night #Steelers vs #Eagles preseason pic.twitter.com/tgzASMhF5V

The next interception came on a 3rd-and-8 where Landry tried to high-point a ball to Cobi Hamilton, that would be tipped to the other team. A deep pass for Coates and another intended for Eli Rogers were also given away, though in one situation, Jones was completely rocked after tight end Jesse James couldn’t block his defender, leaving the quarterback exposed.

Jones would go 12-of-20 for 111 yards, with the four interceptions mentioned above all occurring in the first half. He would finish with a 35.6 QB rating before being pulled for Vaughan in the second half.

Steeler Nation wanted to see what the new guy could do under center, but Vaughan wouldn’t do much better, completing 7-of-13 passes for 67 yards and a 68.4 passer rating.

Some of his throws were downright miserable, but he completed a miracle catch by Hamilton, who was held, mugged and everything else, but still came down with the catch. (See “Plays of the Game” below.)

Hamilton and Rogers would each finish with a game-high four receptions.

Defensively, nothing much stood out from the Steelers sideline, as the team auditioned players for the first roster cuts to come within the next week, as the team would trim from a 90-man roster down to 75.

One of those hopefuls was CB Kevin White, who was signed as soon as new broke of Senquez Golson’s injury. Golson would miss the remainder of camp, and was largely protected on the active roster, before Pittsburgh ran out of bodies and had to place the corner on IR, ending his second season in a row.

White wasn’t necessarily the answer, but the coaching staff gave him an opportunity to play twice as much than the previous game, with the third-most snaps on defense. He would finish the game with a team-high six tackles.

Sean Davis would also see significant time for the second straight week, while Arthur Moats recorded the only sack (or otherwise positive thing) on defense.

Fans were panicking over this game. Landry Jones, Sammie Coates, they all had to go!

Some didn’t realize that several of these players would be seeing their last action in a black and gold uniform, and there’s a huge lack of continuity between athletes who were banded together just a month earlier.

The next week the Steelers would be facing the New Orleans Saints, and improvement was demanded by Steelers Nation!

Of course, none of the major players had played yet, and that would happen the following week… which we’ll cover in our next edition!

Plays of the Game

One of few #Steelers #Eagles bright spots as Jones escapes pressure, connects with Sammie Coates on a tip-toe catch pic.twitter.com/IVrwsoXSiq

Cobi Hamilton makes an INSANE catch on 3rd down during the preseason – Read More: https://t.co/6GQEy9fmjO pic.twitter.com/rTurO0n7Z6