Kevin Colbert addressed the media on Thursday, answering various questions pertaining to the Pittsburgh Steelers business of preparing for the 2017 season. Among those questions asked was about the quarterback situation. Ben Roethlisberger had made some comments about not returning (though he’s under contract and Colbert expects him back) and backup QB Landry Jones, who is set to become a free agent when his current contract expires within a few weeks.

Colbert made a statement regarding Jones’ future in Pittsburgh, which may have inflicted a collective groan across social media from Steelers Nation:

Colbert: Would like to re-sign backup Landry Jones, keep him "in the mix." But might not be ready to seek Ben's replacement just yet.

Some of the replies and comments were far worse (and too vulgar to repeat here). I could never understand the love/hate (or just hate) relationship some Steelers fans have with the four-year quarterback out of Oklahoma. Sure, I thought he had a rough year or two start in preseason games. Sure, I was on the “yeah, he won’t be good” bandwagon. But I was quickly off of that bandwagon and onto the Landry Jones support club express, following what looked like an actual Steelers offense with Jones under center, versus Michael Vick, back in 2015.

An extra preseason game in 2015, plus Bruce Gradkowski‘s season-ending injury, contributed to Jones’ improvement that season. The team still brought in Vick to be the number two behind Big Ben, but it was Jones who finally got an opportunity to showcase what he could do, calling audibles and securing victories in relief appearances against the Cardinals and Raiders that season.

In 2016, Jones became the default backup QB when Gradkowski got hurt again, and was unable to compete with Landry for the two spot. Some fans prematurely freaked out on Jones’ four interception first half in the preseason (for which I said, these aren’t the guys he’ll be playing with) and maybe that’s why some fans still have a bad idea in their memory about what the quarterback is capable of?

I’m not sure. He showed poise against the Patriots in Week 7; hardly a liability or reason the Steelers lost that game. He also came from behind, with some backups, to best the Browns in a Week 17 overtime thriller.

Yet, Jones doesn’t get any credit… and yes, he deserves at least some credit. If Jones doesn’t contribute to those victories in 2015, the Steelers don’t make the playoffs. Period.

But for some, fantasizing about life beyond Ben Roethlisberger has become an unhealthy obsession. The Steelers must have a quality quarterback behind Ben, even though most backup quarterbacks, quite frankly, aren’t that good either. (Or they’d be starters, not backups.)

Those obsessed also want to put Ben one foot in the grave: the Steelers must draft his successor. (Oh, and they can do that in the middle, or late in the draft… or with the first pick, depending on who you talk to.)

Well, I hate to burst everyone’s bubble, but first of all, Ben is going nowhere. And second, Landry Jones isn’t that awful.

Let’s consider the scenarios listed above. The Steelers opt to not take one of the players they chose in the draft, and go after a quarterback. What would that pick look like?

It’s not as simple as it seems, nor would the outlook be as pretty. For what it’s worth, Jones may have been one of the best value quarterback picks over the last few years. (Keyword: value.)

Let’s take a look at Landry’s draft class, as well as every quarterback taken since. 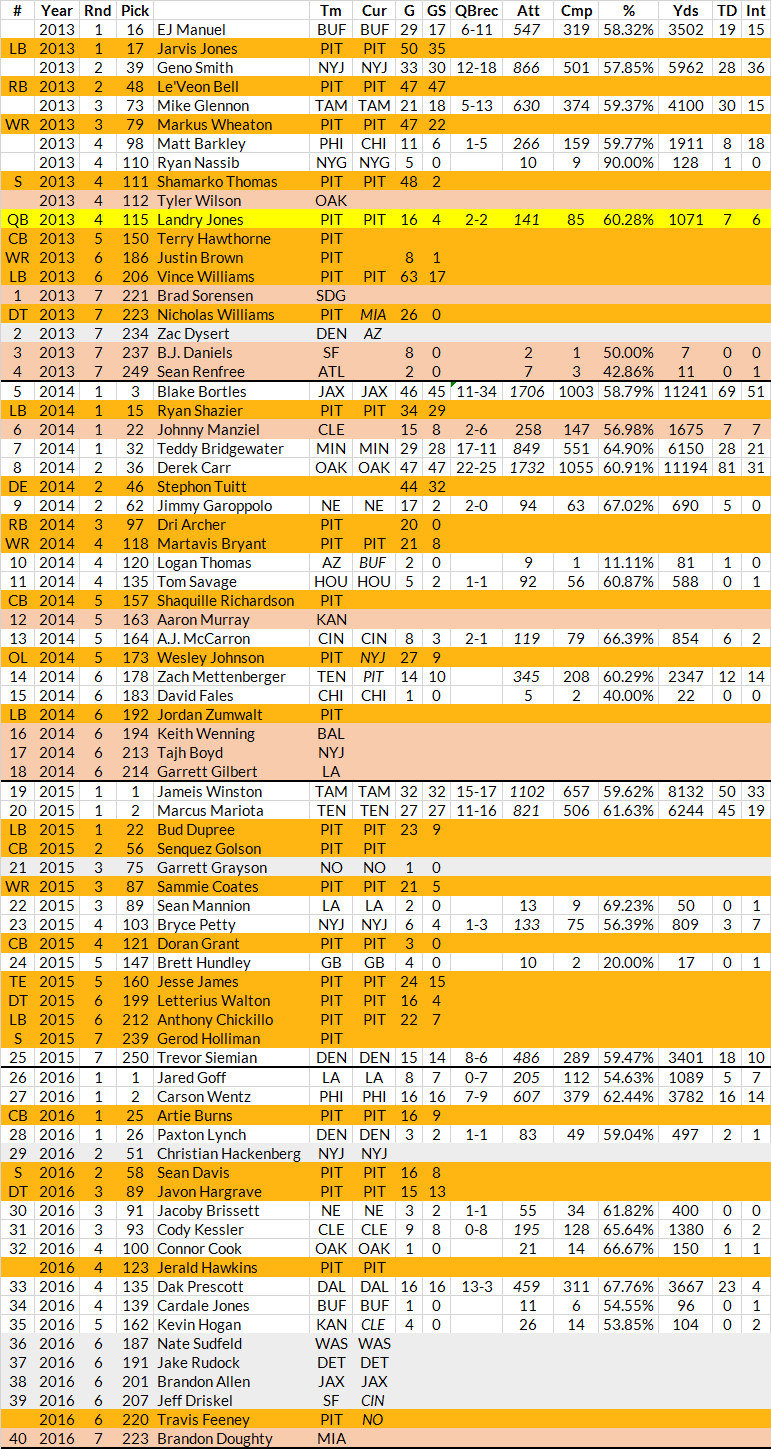 To navigate the table above:

Now that we’ve established the ground rules, let’s take a look at Landry’s draft class. While Jarvis Jones hasn’t been the player he was expected to be with the 17th overall pick, imagine our disappointment with taking Geno Smith in that position.

Or, would you have rather passed on Le’Veon Bell for Mike Glennon? Matt Barkley or Ryan Nassib over Bell, or Markus Wheaton?

Now we’re talking! Heck, even E.J. Manuel, who wasn’t on the board for the Steelers first round pick (taken one spot ahead of Jarvis Jones) never amounted into a starting quality NFL quarterback. And the only other QB from that draft class who is still in the league, Zac Dysert, has yet to attempt a pass.

Let’s also keep in mind, any of those quarterbacks not taken in the first round of that 2013 draft, would all be hitting free agency this season. If they had been selected in the first round, Pittsburgh may have opted for a fifth-year, paying out more for a backup that they could still lose. Imagine if said backup got the same opportunities as Landry Jones, and made the most of them: like Brock Osweiler with the Broncos last season.

Osweiler cashed in on a huge contract last offseason with the Houston Texans, after 305 pass attempts and only 7 starts with his previous team.

Turns out that Brock was benched in Houston following that big payday.

In 2014, the outlook isn’t much better. The Steelers could’ve gotten Johnny Manziel, Teddy Bridgewater or Derek Carr if they had passed on Ryan Shazier. Manziel is out of the league, while Bridgewater could miss two full seasons due to injury, and Carr, while appearing to be the best of the bunch (including third overall pick Blake Bortles) would’ve required passing on a Pro Bowl linebacker when you already have a Hall of Fame signal caller on the roster (Roethlisberger).

Similarly, would you take Jimmy Garoppolo over Stephon Tuitt? That’s what it would’ve taken in order to acquire the quarterback the Patriots are settled on trading away, as Tom Brady continues to play at a high level despite his older age.

I believe you see the train of thought I’m on. For every cause, there’s an effect. In hindsight, I don’t see the majority of our fans thinking that one of the available quarterbacks in the last several drafts were worth giving up something else for. Also, you can see that in order to get a halfway decent QB, you have to be at the top of the draft: the price to move up for those picks, is steep, and would require missing out on more than just a single player.

Consider last year’s top two picks, which the Titans traded the first overall selection to the Rams (who took Jared Goff) and the Browns traded the second overall choice to the Eagles (who selected Carson Wentz). To get thier deal done, the Rams gave Tennessee their top four draft picks (one first, two seconds and a third) in 2016, plus their first and third-round picks for 2017, in exchange for the Titans’ first, fourth- and sixth-round picks in 2016.

That would’ve been the equivalent of trading Artie Burns, Sean Davis, Javon Hargrave, and another second round pick, for Goff, and a fourth and sixth rounder.

Ever watch Deal or No Deal on TV? I say no deal Howie!

For a franchise that builds through the draft, I wouldn’t expect the Steelers to ever put up this type of collateral to move up on draft day, at least not while they’re a contender looking to win the big prize.

That leaves the middle rounds, where some still think value can be found. I want everyone to consider that Landry Jones is one of those mid-round picks, with the value being in the eye of the beholder. I also realize that every pick Pittsburgh has made, has not panned out. Yet, that’s not a grounds to argue taking a quarterback instead of the player chosen, in most of those situations.

If you want to make a case for A.J. McCarron or Zach Mettenberger over Shaq Richardson or Wesley Saunders, go right ahead. But need I remind everyone, that the Steelers already took Jones the year prior, which means, they’d have not one, but two inexperienced quarterbacks behind Ben, with a decision over whether to cut either, or the veteran QB, Bruce Gradkowski.

You then have to decide that Jones wasn’t worth the pick. But who is?

Of those quarterbacks in Jones’ draft class, or taken in the years after he entered the league, only 22 of them have over 50 pass attempts, and 18 of them have over 100. 10 are entirely out of football, 5 are no longer with the team that drafted them, and 7 have never attempted a regular season throw.

Four is the magic number of those listed. Only 4 of those on the list having a winning record: Garoppolo, McCarron, Trevor Siemian, and Dak Prescott).

Several more have more touchdown passes than interceptions, but it depends on how many attempts you want to include to make it an “official” statistic. Those named above with winning records have thrown more touchdowns than picks, but Garoppolo and McCarron have three and four starts respectively. Siemian and Prescott still only have a year of experience under their belt.

I’m not sold that E.J. Manuel’s 19:15 or Cody Kessler‘s 6:2 TD:INT ratio are worth bragging about. Mike Glennon has a more impressive 30:15, while Teddy Bridgewater, Derek Carr, Jameis Winston, Marcus Mariota and Carson Wentz all fall into that “wait and see” category of being second and third year players this upcoming season. Wentz had a 16:14 ratio, while other first round picks Goff (5:7) and Paxton Lynch (2:1) are nothing to get excited about either.

The outlier, of course, is Prescott, who the Steelers apparently had interest in, but faced some off-field issues days before the draft. That caused his stock to drop, and teams to pass. (A shame too, given who he performed.)

There are a few others who were taken late, or not at all, and excelled in the NFL such as Tom Brady, Kurt Warner and Russell Wilson. However, it appears that this is the exception and not the norm. Of the starting quarterbacks last year in the NFL (considering the 32 teams’ majority starters) only 11 teams fielded a signal caller taken out of the first round. Of those 11, 5 were picked in the second, 1 in the third (Wilson) and the remaining 5 consist of Brady, Prescott, and Siemian, along with Kirk Cousins (4) and Ryan Fitzpatrick (7).

For every person who begs for a “value” pick in the middle rounds, I suggest you take another look at what Landry has accomplished in his brief appearances, versus others.

Does he not provide the exact value you’re looking for?

Now, don’t put words in my mouth, and think I want Landry as the long-term starter: he’s not Ben Roethlsiberger. Then again, looking at this list, since 2013, who is?

Besides, dare I mention again, it’s not time to put Ben out to pasture. In the meantime, Landry is exactly what he needs to be: a backup capable of running the offense, and putting his team in a position to win. When compared to his peers, I believe the Steelers are justified in trying to resign him for the foreseeable future.