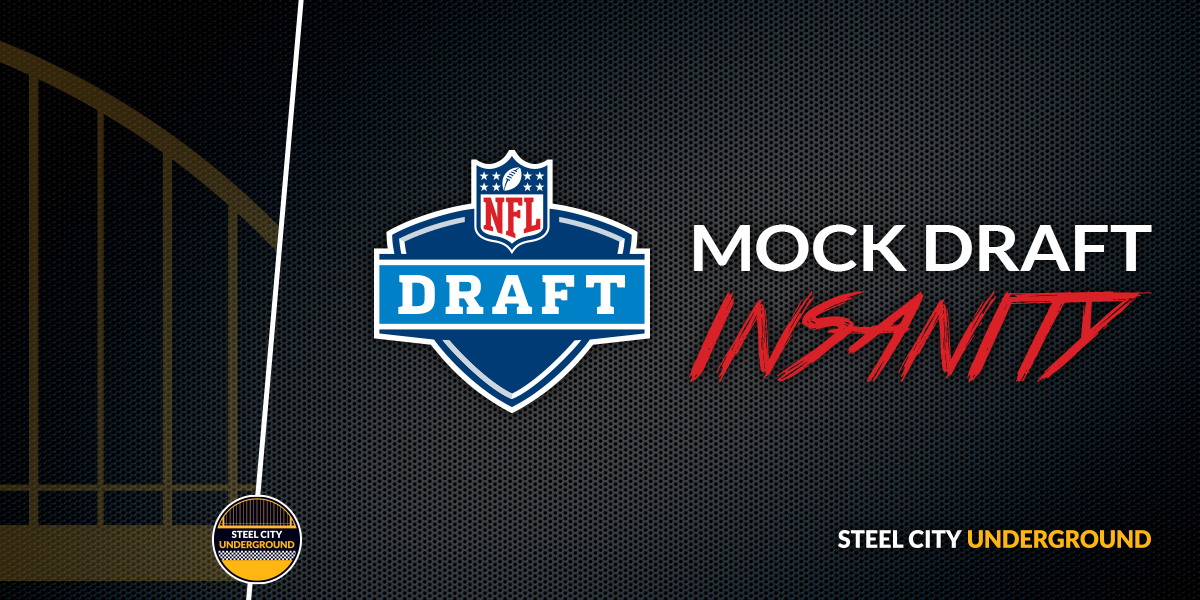 As a quick note, I did these when the Steelers were still getting a projected compensatory pick in the 5th, but as we all know now, it’s been adjusted and upgraded to a 3rd round pick.  I considered re-working this to adjust, but instead decided to leave them as they are, and make the adjustments in v3.

Let’s quickly recap what we got in day 1:

And don’t forget that future first rounder I got from Buffalo for 2018!

Those picks actually fit three needs, including the most pressing (pass rusher). We still have 5 picks in the 2nd round today, and another three in round 3.

That’s 8 total picks in a fairly solid draft for some positions.

One of the negative side effects to all these trades is that I actually find myself with too many picks! If this scenario played out, I would be drafting an unheard of 17 players in the seven rounds of the 2017 Draft. (Talk about insanity!) How would I sign all of these guys? What would I do with them?

It’s safe to say that there’s a better than good chance I would lose some of these guys down the road as the roster has to get trimmed down. This is just another reason why these kinds of trades for multiple picks do not happen.

Still, as I said last time, this more for fun than any attempt at realism, so let’s look at what our needs are, and then let’s draft!

(Needs that have not yet been addressed are highlighted in bold)

It was a really hard choice for me between Harris and Carl Lawson.

Lawson seems to have some injury history, and he also doesn’t seem to deal well with plays that aren’t right in front of him. He is great at shedding tight ends on the edge, but struggles some with tackles. He also seems somewhat predictable in his pass rushes.

Harris on the other hand has better athleticism, but might have more difficulty against the run.

Both of these guys would have been value picks here, but I went with Harris because he doesn’t have the ACL injury in his past like Lawson does.

The plethora of picks that my trades provided me allowed me to be very aggressive with drafting EDGE guys, which I think is the biggest need the Steelers have. I didn’t just double dip, in fact, as you’ll see in a moment, I triple-dipped.

If I’m going to be honest, Rivers is all over the boards. Some boards have him ranked as high as 40, and others have him all the way down in the 200’s. I tend to think he’s going to go round 2, rather than round 5or lower. What he does at the Combine will certainly impact that, and it’s even possible he climbs up into the First round conversation.

Rivers is a guy I have targeted every time I draft, and the reason is simple – the guy flat-out plays. He reminds me of James Harrison, and that’s not faint praise. He’s fast, he’s strong, he has good hand usage and a very high motor. He may be a little stiff in the hips, and he isn’t always perfect at handling gap awareness, but that can be taught.

I think his upside far outweighs his downside, and I would love to see this kid wearing the Black and Gold for the next 8 years or more.

I know I’ve taken a lot of EDGE guys early in the Draft, but I think I can address the other real needs as the Second round progresses.

I almost went safety here. I like Obi Melifonwu from Connecticut, but the truth is I like our safeties, and I think I can get a good value before the end of this round.

Hey, that’s the luxury of having all these picks! So instead of Melifonwu, I took Cunningham.

This is a solid value here, but not a great one – he’s projected to go about this spot in the 2nd. Cunningham has some weaknesses, no doubt. He needs to get stronger, and he has some problems with missed tackles. To be honest, I’m drafting Cunningham to help out on special teams.

If Christian McCaffery hadn’t gone in the mid-teens in round 1, I might have done the same with him, drafting him purely to be a punt and kick returner. Special teams needs help, and I think that Cunningham can contribute immediately there, and grow into a solid backup at LB.

I hate picking guys from this team. It goes against my Scarlet and Grey (Ohio State) skin, but the needs of the Black and Gold outweigh the prejudices of the Scarlet and Grey.

The knock on Wormley is that he is inconsistent. He takes plays off. To me, that can be addressed with coaching. His coordinator (at that school I won’t name) loves this kid, which speaks volumes. He’s a high character guy. I think he’s exactly the type of guy who can learn for a year, maybe even contribute some at depth, and then become a solid backup to Cam Heyward and Stephon Tuitt.

Wormley has a strong base, he sets a physical edge, and he can move inside to get to the QB. He has starter potential on most teams, but I see him as a rotational guy, giving Cam and Tuitt breathers when needed without allowing much drop off.

The benefit of not having a ton of holes is you can actually draft for backup roles!

I decided to address the safety position with this pick. I’ve already passed on Budda Baker, Desmond King and Obi Melifonwu, and the reason I felt I could was because I really like the guy I chose here, Marcus Williams.

Marcus Williams is a ball hawk. He is much more a free safety than a strong safety which I think is fine, because Sean Davis has proven to be a solid strong safety. Mike Mitchell is a guy I like, but he is now 29, and will be 30 this June, so having some youth behind him isn’t a bad idea, and I think Marcus Williams could provide some quality depth (here we go, drafting for depth again).

Williams has good ball skills, and is excellent playing as a center fielder, then jumping routes, challenging throws and in the end, causing turnovers.

It’s round three, and I already addressed every need on my list except TE, QB and RB.

It’s time to address another one with this pick: Bucky Hodges is 6’7” and 245 lbs. His frame will let him add a bit more weight, and I don’t think it will impact his game at all, except to give him a little more stability in blocking.

Hodges is a “glider”, meaning he is smooth, and possesses great athleticism. He has long arms, so has an extended catch radius. He has shown at VT that he is willing to go over the middle, and should be a outstanding red zone target for Ben.

He has weaknesses, and has a lot to learn, but he possesses the physical traits that make him a potential deep threat at tight end, as well as a productive option over the middle.

Frankly, he’s a steal in round 3, even with the first pick.

It’s hard to imagine the Steelers going through a draft and not drafting an offensive lineman.

Ethan Pocic is an absolute steal at this point in the draft. He’s a potential second round value, and he’s just sitting there waiting to be snapped up.

Pocic is versatile and can play all 5 line positions. That’s the kind of position flexibility that all teams crave, and the Steelers are no different.

NFL.com said this in its draft profile on Pocic:

“Shoots hands inside defenders frame and keeps them there. Shows the hand strength and body control to “ride the bull” against stronger players while remaining engaged.”

We have tremendous O-line depth with Hubbard (if he’s resigned) and B.J. Finney, but I don’t think the Steelers would be able to pass on a value pick like this, especially with all the most pressing needs filled (many more than once).

I know, I know, I just took a tight end with the first pick in this round, but Butt still sitting here late in the 3rd makes him a value pick. He reminds me of Matt Spaeth, so I took him.

Yes, that complicates our TE depth tremendously, because we are not going to keep Jesse James, Xavier Grimble, David Johnson and Ladarius Green, as well as these two draft picks.

My thought here is that someone will send me a future pick for Butt, or worst case, we upgrade the position and get younger in our depth.

I like Xavier and David Johnson, but I don’t know if either has the upside Butt does.

Okay, what do we have left? Running back and quarterback: two positions I listed as needs, that really aren’t.

If Landry Jones were to get a free agent offer that the Steelers aren’t going to match, then it might be time to draft another “developmental” quarterback in this draft… and I might rethink one of these picks.

I’m going to operate under the assumption that Landry is back, and that this really is not a position of need.

Running back might be much the same – although I am a little more interested in getting a RB for depth than I am a QB right now.

So we enter Day 3 with very few needs, and only 4 picks remaining in this mock draft.