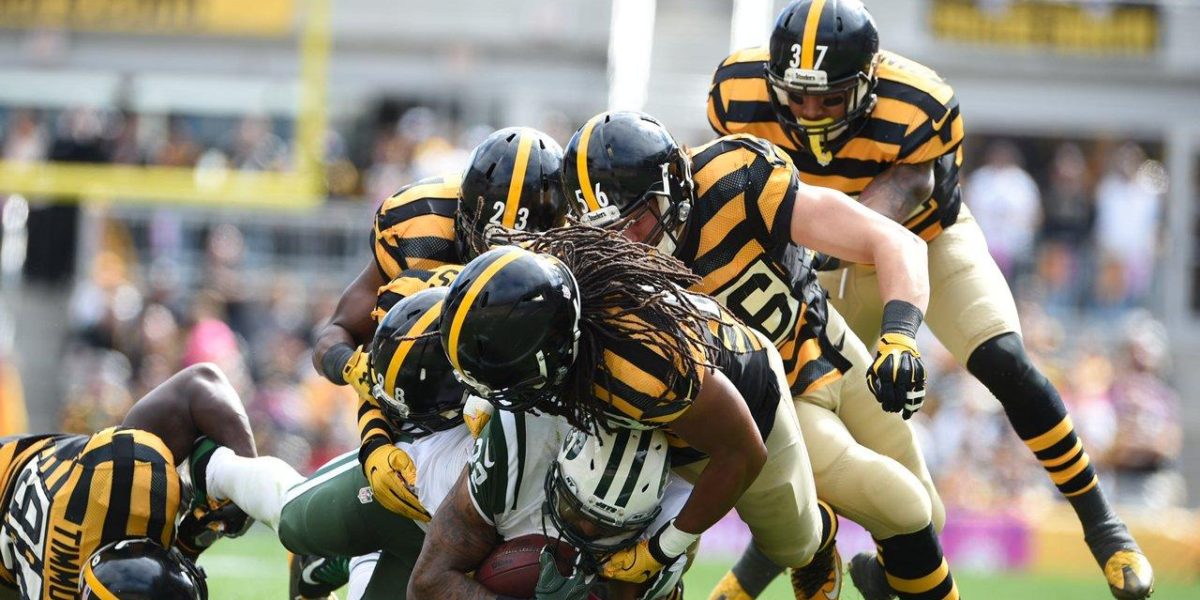 How can the Steelers get better in 2017?

Social media often gives me a good chuckle. It also makes me incredibly frustrated that some “fans” can go overboard on speculation this time of the year.

To recap: it’s now March. Football games, the ones which count, do not begin until September. Yet, there are some people who let the insanity consume them, thinking that the Steelers have somehow gotten worse by losing only a single player in free agency, while equally making no major moves.

I suppose I was equally validated by this thought, once I saw this tweet by the NFL, for NFL Network’s Elliot Harrison and his Power Rankings:

For most of 2016 the Pittsburgh Steelers hovered in, or around the top ten of Harrison’s “power” list. What makes his latest revelations interesting is that some football fans have already thrown in the towel, with some of Steelers Nation throwing in their Terrible Towels, all but conceding the Patriots have “won the offseason”.

To recap: winning the offseason is never a guarantee of success in September. Just ask the “revamped” Miami Dolphins and Philadelphia Eagles of several years ago what signing big name players like Mike Wallace or head coach Chip Kelly has brought to their trophy cases. (Nothing.)

To have the Steelers make absolutely zero moves in free agency other than re-signing their own marquee players (Antonio Brown and Le’Veon Bell) and still be ranked third behind the two Super Bowl participants, is the pat on the back. For me, it’s an indicator that the Steelers are close; and after finishing 11-5 and making it to the AFC Championship game, they are.

So, without making big moves, such as high-profile big money signings, or lower profile trades, the Steelers stand pat. But everyone is aware a franchise can’t rest on their laurels… or can they?

What do the Steelers need to do to get better? Here are some ideas.

I’ve beaten the “second receiver” thing to death, so I’ll let that be for now. (You can read about those thoughts here, if you haven’t already.

The offensive line is intact, and looks to stay that way for years to come. Overall, the entire offense appears to be intact, should Ladarius Green return to full health, and Martavis Bryant return from suspension, there isn’t much that could change in the next two years on this side of the ball.

So where can the Steelers offense get better?

The Steelers offense struggled at times last season. Even to the human eye, these numbers shouldn’t seem too surprising, except possibly the rushing yards per game stat, considering who DeAngelo Williams ate up teams the first two weeks of the season, and Le’Veon Bell set milestones several times as well.

Still, the Steelers could stand to improve on offense. Their points scored per game was eclipsed by several non-playoff teams (Bills, Colts) which means scoring isn’t everything when it comes to winning games. Pittsburgh could stand to do better on third down, however, as they struggled with three-and-outs, and converting on third downs overall.

Improvements in those areas would certainly benefit the defense, by keeping them fresh on the sidelines, while wearing down the opponent’s unit.

It would make logical sense that if the Steelers have less three-and-outs, and stay on the field longer, they should see the rest of their rankings get at least a slight upward bump.

There are still some eye-rollers out there who think the defense is a weak link, because of what happened against the Patriots.

It’s not as bad as you think, but as with the offense, some slight improvements will need to be made.

The D lost a major veteran when Lawrence Timmons left for Miami this offseason. It’s still unknown if Ross Cockrell will return, as he’s been tendered as a restricted free agent. If another team makes a move for him, Pittsburgh will have to replace two players.

At least one of those replacements is well-known: Vince Williams should be able to step in and takeover from where Timmons left off.

As for Cockrell’s replacement, that person might not be on the roster yet.

Regardless, here’s where the 2016 defensive unit ranked among the rest of the league:

And in order for those numbers to truly resonate as a sort of “improvement”, you have to see where this team came from a year earlier, in 2015:

The defensive improvements look minimal in some areas. For example, one might assume that Pittsburgh got worse against the run in 2016 versus 2015, but the truth is, the pass D was so bad in the previous year, that teams didn’t have to run against the Steelers.

Thus, that’s one of the statistics which looks artificially “worse”, but in reality, it’s the passing yards against average which dropped significantly, over 10 spots, and 30+ yards per game, which matters.

Overall the defense gave up less total yards while remaining even in allowing points, and scoring drives.

Like the offense, the Steelers defense also needs to improve on third down efficiency, for the very same reason: to stay fresh and not give up points.

Doing so would also bring up the rest of the numbers.

This almost seems too easy of an answer for the title question, but both sides of the ball boil down to third down efficiency. If the offense stays on the field, they can chew up time of possession and keep the defense fresh, while keeping opposing offenses from getting their opportunity to maintain time of possession.

The defense can improve on third down and give the offense their chance as well.

It boils down to some simple, and otherwise basic, principles of football; but it’s those principles the Steelers have lacked over the last few seasons which can keep them on their winning ways.

During their nine-game winning streak, the Steelers defense gave up 287.4 total yards on average.

The defense also forced 16 turnovers to 10 by comparison, allowing 22.8 points per game during the first stretch, while that number dipped to 16.5 per game over the last nine (including two of the three postseason games – without mentioning the third which was left out).

Those figures show a dramatic improvement within the same season, and show that perhaps the Steelers aren’t too far off from returning to the defensive dominance we’ve all grown accustomed to with past championship teams.