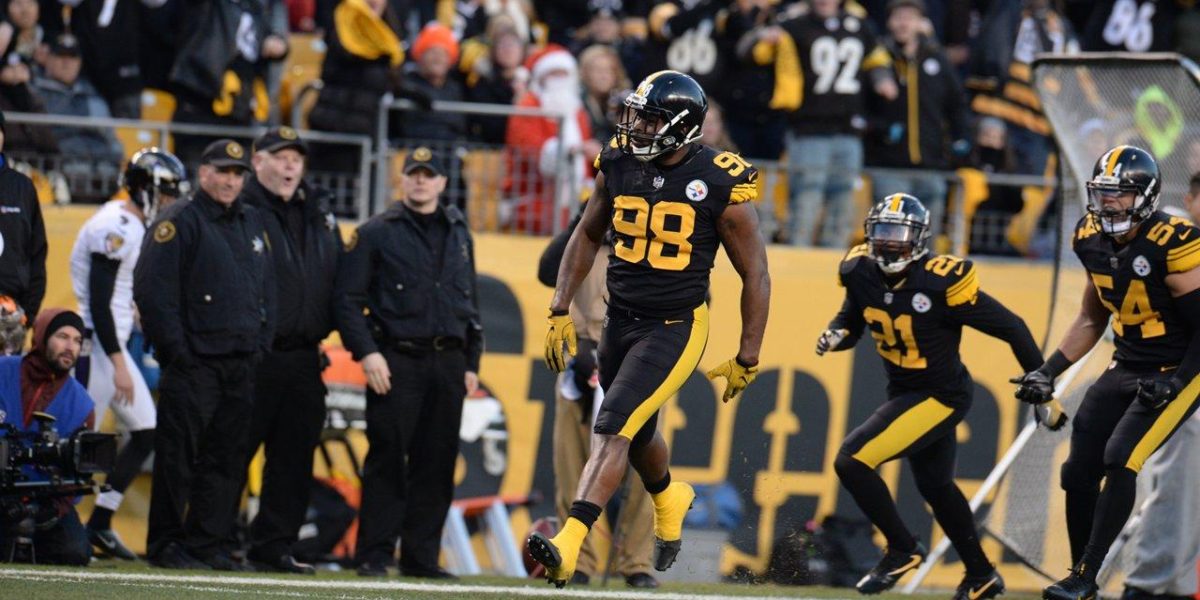 Film Room: Steelers in good hands with Vince Williams taking over for Timmons

Lawrence Timmons was the staple of the Pittsburgh Steelers defense for an entire decade. Timmons became a free agent this offseason, leaving Pittsburgh to sign with the Miami Dolphins on a two-year, $12 million dollar deal. However, the inside linebacker position is still in good hands with 2013 sixth-round draft pick Vince Williams.

Williams, 27, has been a truly dominant force on special teams for the several years. Occasionally, when Shazier or Timmons is injured, he steps in and does his job at an extremely high level.

Today we are going to dive into a film room session dedicated to Williams, to help ease the minds of Steelers fans who are skeptical of the linebacker (and wanted the organization to pick up Patriots linebacker Dont’a Hightower instead).

For those who doubt Williams coverage skills, this following clip is for you. The play below is from the 2015 NFL season when the Steelers upset the Arizona Cardinals at home without starting quarterback Ben Roethlisberger.

Cardinals quarterback Carson Palmer threw a pass over the middle of the field to tight end Jermaine Gresham. Williams dropped back into coverage, kept his eyes on Palmer, and tipped the ball just enough for fellow linebacker Lawrence Timmons to reel in an incredible interception.

The majority of these upcoming plays will display something that Williams is terrific at: stopping the run. While Williams only has one pass deflection in his entire career (the play above) he wasn’t put into many of these types of situations early on in his career. (Case in point, the 2016 season was the first time he registered a sack.)

I believe if he is given a full playbook, and is the main starter on defense in 2017, he will make splash plays at key moments.

Remember it took Timmons a few years to finally understand what he was doing. I expect Williams to head into the season with enough information to succeed at a high level. It’s obvious that if he is asked to play his assignment, he will get the job done.

Early in the 2016 season, starting inside linebacker Ryan Shazier missed several weeks due to injury. Vince Williams shined in his place; against the Kansas City Chiefs, he recorded his first career sack. Williams had a half of a sack against the Cincinnati Bengals in 2015, but this was the first time he earned the real thing.

The only problem with showing this play is that it might go down after his career is done and over with, as the easiest sack he registered. Chiefs quarterback Alex Smith fell down and he touched him.

That was the play.

However, this clip showcases a real sack that Williams earned as part of a terrific overall play. The New York Jets came to Heinz Field in this week five matchup. Williams is lined up on the right tackle and forces the lineman backward with a strong push. He stays with the play the entire way and has the ability to get off of the block, which results in a sack on Ryan Fitzpatrick.

It was a great play, by a physical specimen who can work almost anywhere on defense.

Williams’ Ability To Stop The Run Is Quite Impressive

I have two clips I want to showcase that should make you extremely excited about the upcoming season. Everyone should know by now the Williams is terrific when playing the run. It’s just how he is made. A big linebacker with a hard-hitting attitude makes great for preventing big running plays.

In the above clip, the big fella is lined up in the middle of the defense. As the Jets’ offensive line shifts to their left, Williams moves his body laterally, and makes his way through two defenders, registering an impressive open-field tackle on running back Matt Forte.

This play displays great hustle and awareness from the linebacker, and an ability to make a solid tackle; something that the Steelers defense has improved on over the last few years.

Runs Up The Middle? Not A Good Idea!

If you’re a football coach, running the ball up the middle is always a great idea if you are in a short yardage situation.

We all know football is a game of inches. We have seen this in recent Super Bowls, especially the Seahawks versus Patriots back in the 2014-2015 season. If Pete Carroll ran the football at the one-yard line, instead of throwing the slant route, the outcome of that game might have been different.

When you are up against an athlete such as a Vince Williams, you know that running that ball on the one-yard line is going to be a challenge. His physical toughness is out of this world. I am a huge fan of Williams because of that toughness, and the passion he displays after each and every single play he makes.

Take a minute to see how he responds after forcing a fumble, making a tackle, or a getting a big hit on special teams. He ignites the defense and that is exactly what you want in a football player.

This play is a perfect example of running the football up the middle and gaining absolutely nothing. Williams lines up in the center of the defense as Chiefs running back Knile Davis runs the football to the right, and tries to cut upfield. Williams makes an exceptional tackle; if he missed, there was a wide-open lane to the left Davis could have run through, after James Harrison came in and missed his tackle.

As you can see, Vince Williams will display something that every football player should: passion and an aggressive-like mentality. He has a physical presence that makes him a prototypical Pittsburgh Steeler, and I can’t wait to see what is in store for him as a starter this season.

Let me know your thoughts in the comment section below on if Williams is going to do good or bad in 2017.

2 responses to “Film Room: Steelers in good hands with Vince Williams taking over for Timmons”