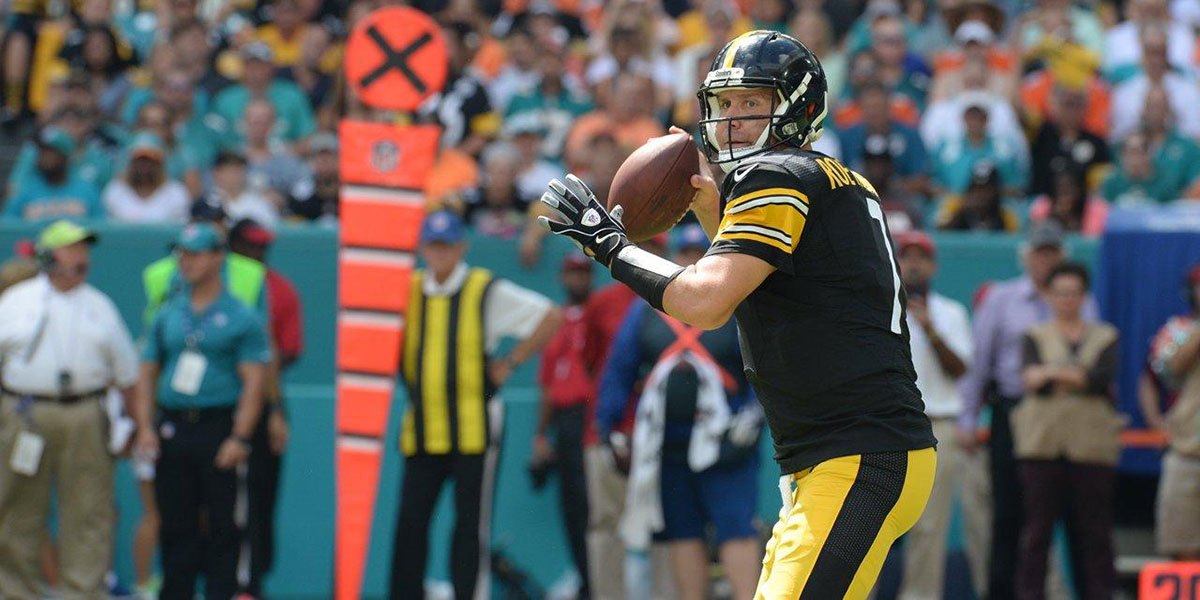 A subset of Steelers Nation who want the organization to draft Ben Roethlisberger‘s heir apparent probably let out a sigh of relief after hearing Head Coach Mike Tomlin talk to the media at the league’s annual meetings this week:

“We’ve been in that mentality… Our experience in this business and the realities of this business put us in that mindset. [GM] Kevin [Colbert] and I have spent special attention to that position over the last several years, if nothing else from a dry-run perspective, to gain the knowledge and the information necessary to make good decisions when we come to that fork in the road. Who’s to say that we aren’t there right now?”

For all intents and purposes, the subset of fans who are gung ho on taking a quarterback in this year’s NFL Draft were excited to hear Tomlin’s comments. Finally, the savior of Pittsburgh football will be added to the roster.

I hate to break the news to this part of the fanbase, but the “savior” has been here since 2004. He was drafted 11th overall and his name is Ben Roethlisberger.

Of the 33 signal callers who have been taken in the first round since Roethlisberger, 18 of them were starters in the NFL last season. That’s being generous, counting Paxton Lynch’s two starts, Jared Goff’s slow start, and Blaine Gabbert’s failure in San Francisco (where he was benched for Colin Kaepernick). I don’t like to evaluate quarterbacks until they have a few seasons under their belt, as it takes time to develop players (if they develop). Robert Griffin, Jay Cutler and Andrew Luck all battled injuries last season. Two of those three (not Luck) are looking for employment this offseason.

Leaving Winston, Mariota and last year’s top draft picks off the list would severely skew the success of taking quarterbacks in the first round. It means that using “starting” as a benchmark, 15 of the top selections taken since Ben have had some success, while 13 others have not.

Unfortunately, “starting” cannot be used as the only benchmark. I have my doubts that Steelers fans would feel more comfortable with Cutler, Ryan Tannehill or Blake Bortles as the starting QB. But you could do worse. Every single player whose name is not in bold, through 2011 on the above list, has flunked out of the NFL for one reason or another… with the exception of Mark Sanchez, who just about everyone can agree is not an upgrade at the position. (Well, I know of at least one person who likes him, but I have to believe they still wouldn’t prefer them as Roethlisberger’s heir apparent.)

Teddy Bridgewater was on his way to doing good things, but an offseason knee injury put him on the shelf for all of last season, and possibly some or all of the 2017 season as well. Then there’s the number of times a team has struck out on attempting to find a franchise quarterback. The Browns have spent three first round picks on passers (Brady Quinn, Brandon Weeden, and Johnny Manziel) while the Bills have used two (Losman and Manuel).

On the flipside of this literal coinflip, a team could land a long-term solution such as Aaron Rodgers, Matt Ryan, Andrew Luck or Cam Newton, but having a franchise quarterback doesn’t always translate to wins on the football field. The Panthers have missed the playoffs in half of the seasons played since Newton entered the league. The Colts have missed the last two postseasons out of five, following 11 of 13 years of postseason appearances with Peyton Manning on the roster. (Granted some of that is due to Luck’s health.)

Jay Cutler has only led one of his teams to the playoffs once. Matt Stafford: three of his nine years at the helm of the Lions.

And yes, I’m well aware as you are that Aaron Rodgers was probably the draft steal of the decade if not the history of the NFL, so long as you’re not counting a certain quarterback from New England who wasn’t taken in the sixth round. So I bet you’re asking by now, what’s your point Joe?

My point is simple. For every Rodgers there’s a Campbell. From Rodgers’ pick, you had to wait three years to get another top-tier QB talent such as Matt Ryan. If the Lions passed on Stafford for Mark Sanchez or Josh Freeman, how would that have worked out? How much did taking Sam Bradford improve the Rams? (And no, trading him for draft picks hasn’t worked out either!)

Hey, a Tim Tebow sighting! (Yes, he was a first round pick too!)

And geesh, everyone after Cam Newton in 2012… I mean, Jake Locker was alright, but he had to retire. Blaine Gabbert and Christian Ponder? They’re headed that direction, but for different reasons. (Locker retired due to health concerns.)

So when Mike Tomlin said he was “paying special attention” to the quarterback position, I believed him. But for different reasons. Entirely different reasons. The Steelers head coach, along with General Manager Kevin Colbert know how to best strengthen their team to compete for a Super Bowl. With a Hall of Fame quarterback already on the roster, there are 21 other starting spots which demand a first round graded talent. Some of those positions are already filled, with the challenge being the one that can be strengthed in this draft.

I am near certain it won’t be the guy with the headset standing on the sidelines, who rarely gets in the game.

P.S. – Yes I hear you. Ben gets injured. Steelers made the postseason the last three years… get over it! 😉