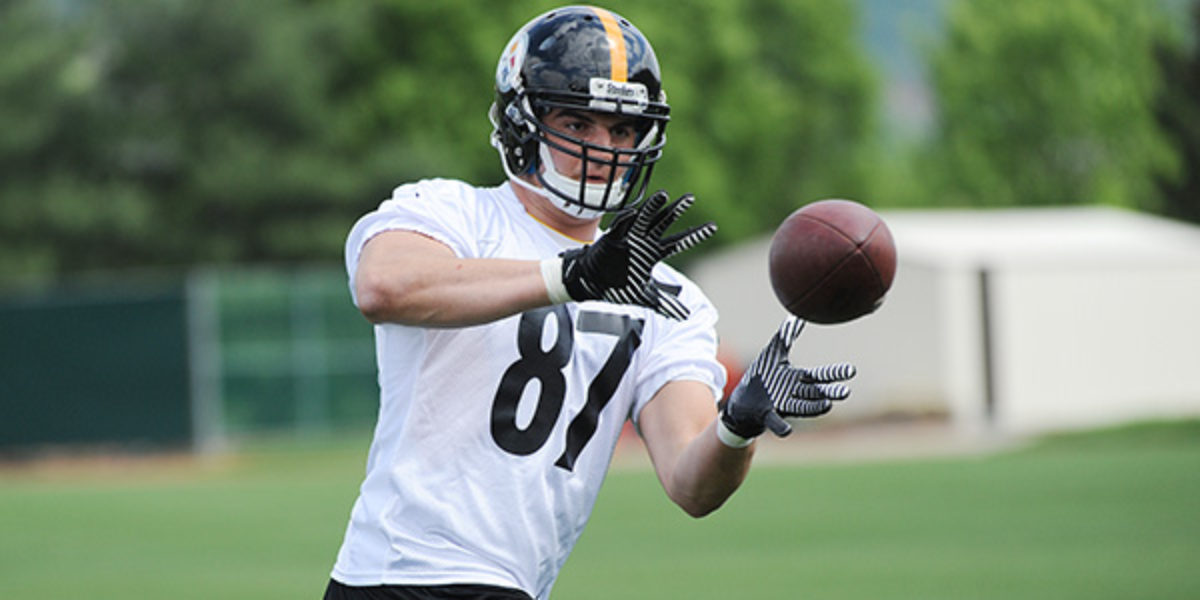 Anatomy of the Steelers drafts is an ongoing series leading up to the NFL Draft which examines the successes and failures of past Pittsburgh draft choices.

Blanchflower was a two-time team captain for the UMass Minutemen who, despite missing three games as a senior and most of his pre-draft workout opportunities, set the team record in receiving yards by a tight end with 1,164. His gritty senior performance, playing through a serious sports hernia, was the second-best on the squad in catches (27), yards receiving (313) and touchdown catches (three). He went from a kid with a partial scholarship to a team leader and gritty performer who was versatile and a guy who could allegedly give the Steelers options at either the Y- or H-back positions.

A sleeper, Blanchflower had a mid-range grade and was expected to be a late round selection.  His NFL.com draft profile offered the following bottom line:

A scrappy, tough, competitive ‘Y’ tight end, Blanchflower was slowed by injury as a senior. However, he possesses the grit to factor in-line in the run game and can become a solid base-blocking No. 3 tight end and short-area receiving option.

He was projected as strong in run and pass protection but willing to lay out for the ball to make difficult catches. He was expected to show weakness in overall athletic ability, route-running creativity and elusiveness and an inconsistent use of hands on the line.

In 2012, the Steelers had four tight ends on their roster: Leonard Pope, Heath Miller, David Paulson and Jamie McCoy. Pope was a free agent acquisition from the Kansas City Chiefs the year before. Miller had been selected in the 1st round of the 2005 draft (30th overall). Paulson was selected in the third round in 2007. McCoy, the rookie out of Texas A&M, was already on the outside looking in as an undrafted tight end who’d signed with the St. Louis Rams and was cut before the regular season and added as a body to the Steelers’ roster.

That season, the Steelers only sent McCoy into a single game and Pope was being overshadowed by both Miller and Paulson in production. Paulson was looking more and more like he would be less of a receiving option.

In 2013, the Steelers’ tight end corps were devastated by injury. David Johnson, the 2009 draft selection, had been placed on injured-reserved due to a wrist injury.  Former third-round pick Matt Spaeth had spent the 2011 and 2012 seasons with the Chicago Bears and come home only to suffer a serious foot injury. With Miller (knee injury) banged up, the Steelers were awarded Michael Palmer on waivers. Palmer had gone undrafted in the 2010 draft and signed with the Atlanta Falcons, where he played until jumping onto the New York Giants and Seattle Seahawks rosters briefly before the 2013 NFL season.

Pope (who’d signed a one-year contract with Pittsburgh to reunite with Todd Haley) and McCoy were gone. McCoy vanished into the ether and Pope signed with the Chicago Bears only to be released before the regular season.

The Palmer/Paulson duo left enough to be desired that the Steelers headed into the 2014 NFL Draft looking for answers at the position.

Blanchflower presented the Steelers with what they fully believed at the time to be a young, stable tight end that would be versatile enough to work with tight ends coach James Daniel, a holdover from the Bill Cowher days. It was that versatility that Kevin Colbert commented on in the post-draft press conference. Daniel saw Blanchflower as a “two-phase guy” – someone the Steelers could get off of the block and into open space.  “He’s played in a multiple-formation offense,” Daniel said, “and what he was doing gave us a chance to look at a lot of things.”

The 2014 NFL Draft was something of a media circus. Jadeveon Clowney, Johnny Manziel, Blake Bortles, Sammie Watkins and Khalil Mack were all catching camera flashes and giving soundbites. By the time the seventh round rolled around, there was little fanfare and most interested parties had gone home or turned off their television sets.

Pittsburgh had already pulled the trigger at linebacker with Ryan Shazier in the first round (no. 15 overall) and solidified their defense with Stephon Tuitt (DE) in the second round. Among those selected in the seventh round, Will Smith  – an outside linebacker that now plays end for the New England Patriots – is the biggest name the Steelers may have had on their draft board at one point. Jabari Price has done little at corner for the Minnesota Vikings since being selected late. The Baltimore Ravens re-signed seventh-rounder Michael Companaro to a one-year deal on April 6, 2017, after he was sidelined for nearly all of the 2016 season (calf).

The rest of the list is a mix of players who are depth or no longer with the team that picked them.

Blanchflower filled a need and after making a personal visit was still available to the Steelers at that time. The pick made sense.

Blanchflower was among the final cuts the Steelers made on August 30, 2014. He was signed to their practice squad the very next day. The Steelers would go on to sign Blanchflower to a reserve/futures contract on January 5, 2015, only to waive/injured him to make room for free agent Ray Hamilton (TE, University of Iowa). Hamilton was cut before the beginning of the regular season and once Blanchflower cleared waivers, he was placed on injured/reserved until he was cut on February 16, 2016.

The young prospect never played a single snap in a regular season NFL game and slipped into obscurity like so many football players do. That he was never a factor for the Steelers may have helped determine where the Steelers looked for help at that position moving forward: opting to grab a more athletic and healthy Jesse James in 2015 and reach out to Ladarius Green in free agency.