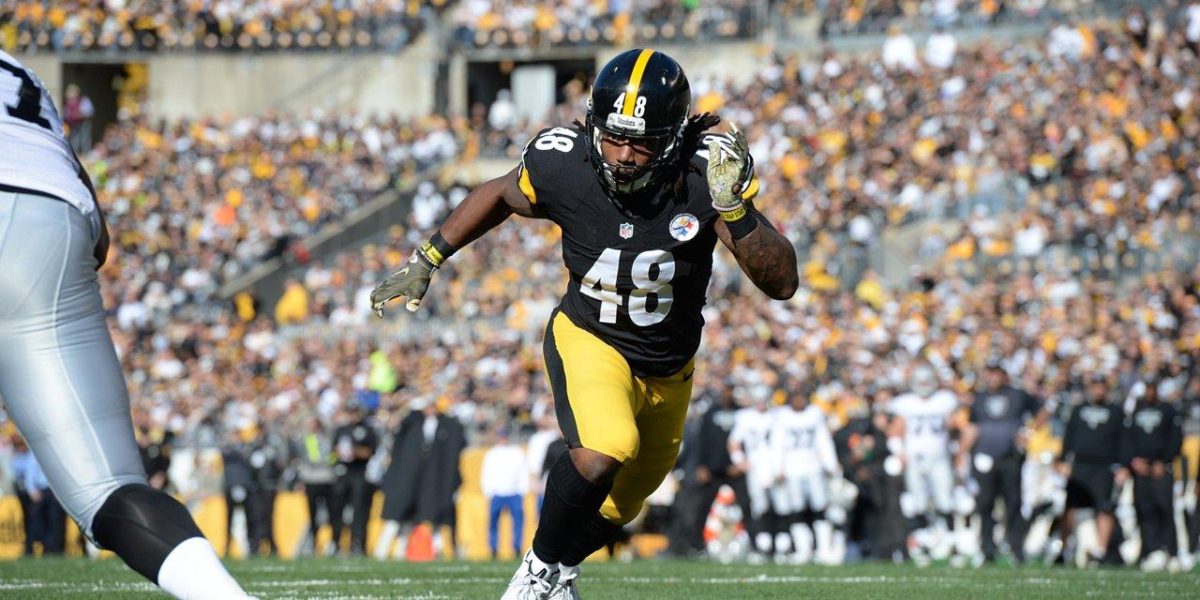 The offseason is a time for NFL players and coaches to improve different areas before the next season arrives. Pittsburgh Steelers outside linebacker Bud Dupree has taken his workouts and prep for 2017 to the next level. According to CBS Sports Senior Writer Pete Prisco, Dupree has been perfecting his craft with former All-Pro defensive end Chuck Smith.

Smith was selected in the second round of the 1992 NFL draft by the Atlanta Falcons. He spent his first seven seasons with the team before signing and retiring with the Carolina Panthers after just one season. He managed to earn 58.5 total sacks, three interceptions, and one touchdown in his career. Life after football has been a very interesting but successful life for Smith, who works with current NFL players to better improve their overall play.

An excellent playing resume for Smith along with teaching great players in today’s game such as Super Bowl 50 MVP Von Miller and Los Angeles Rams defensive lineman Aaron Donald are two reasons why Steelers fans should be excited about Bud Dupree’s upcoming 2017 season.

Dupree, 24, was selected with the 22nd overall pick in the 2015 NFL draft from the University of Kentucky. In his rookie campaign, he started the season off strong registering four total sacks in the first half of the season but managed to earn none in the second half when it mattered the most, come playoff time.

After a somewhat decent rookie year, Dupree wanted to show everyone in 2016 just why general manager Kevin Colbert and head coach Mike Tomlin drafted him. The only problem was his health. Dupree started the 2016 season on the injured reserve list and several months later, on November 9th, was placed back on the active roster.

Against the Cleveland Browns in week 11, Tomlin and company decided it was best for him to sit out his first game back and return to the starting lineup in a limited role in weeks 12 and 13. Dupree would get a major increase in playing time against the Buffalo Bills in week 14, where he managed to earn 2.5 sacks and six total tackles. In that moment I knew there was something extremely different about Dupree this time around. He looked stronger, quicker, more powerful and not as raw as he did a season ago.

Let’s take a look at what has changed with Dupree in only one season; and why if fully healthy in 2017, he is projected to have double-digit sacks (something that we haven’t received from an outside linebacker since the good ol’ days when Lamarr Woodley and James Harrison were in their prime).

Improving His Ability To Bend Off The Edge

The first time I witnessed Dupree bend and drive toward the quarterback was in week five against the San Diego Chargers in 2015. In previous weeks such as week one and two where he registered his first two career sacks, he displayed his relentless motor and ability to never give up on the play, chasing the quarterback from behind to sack him. That is not true talent but rather the player being in the right position at the right time and having solid speed. What Dupree needs to do better is work on the use of his hands and that’s exactly what he has been doing this offseason with Chuck Smith. In addition to that, he needs to be able to bend and drive toward the quarterback, and I must say he is getting very good at this skill.

In the above clip versus the Chargers in 2015, Dupree is lined up as a left outside linebacker. When the play starts he immediately rushes toward the right tackle and catches him off guard, using that to his advantage. He goes around the edge using his power to push up the pocket to sack quarterback Phillip Rivers.

Against the Cincinnati Bengals in week eight of the 2015 season, Dupree was going up against right tackle Andre Smith, a first-round pick from 2009. It’s a tough task for any rookie to go up against a well-developed athlete that has been in the league for several years. Lined up over Smith, Dupree displays decent quickness off the ball but very little hand movement and gets pushed to the side so easily. If it wasn’t for his 4.56 40-time speed, Bengals quarterback Andy Dalton would have crossed the line of scrimmage which would not have registered a sack for the rook.

The Browns were messing around with their offensive line in the final game of the 2016 regular season. Former 2015 first round draft pick Cam Erving, officially listed as a center, was placed at the right tackle position. In all honesty, if Dupree couldn’t notch at least one sack against what many call a ‘bust’ athlete in Erving, then something is wrong.

Down 14-7 in the third quarter, the Steelers needed a spark to get them back into the football game. Dupree provided it after using nice leverage and his quick feet to elude the outside block, circling back around and getting both hands up to force a fumble on quarterback Robert Griffin III.

The most impressive thing about this play is his ability to use his quick hands to get past Erving and to reach RGIII.

Woah! Now, this is a beast play by Dupree! If it wasn’t for the other Steelers defensive athletes overpowering the Dolphins offensive line, Dupree would have registered a full sack instead of a half sack.

Just take a second and look at his speed and power to push back 2014 first round draft pick Ja’Wuan James. Dupree’s use of his quick hands sheds off James and he reaches quarterback Matt Moore for an assisted sack.

What is the difference between the three, other than the year? Well, in the 2015 clips, Dupree only uses his speed and power to get off the edge to reach the quarterback. In the 2016 clips, he uses something that is essential for an outside linebacker: his quick hands along with his speed and power. It may not seem like a big difference, but for an edge rusher you need to be able to use your hands to fight off lineman. It’s extremely important for the growth at the position and Dupree certainly has been working on that this offseason.

Check out this clip from his Instagram page. You will see that he is mainly focusing on using his hands to practice shedding off blockers:

If he can perfect his technique he will be an absolute force to be reckoned with in 2017.

In college, I didn’t have any moves. I didn’t know what I was doing. I got by on my athletic ability. That doesn’t work in the NFL. You need to have more.

The above quote is absolutely spot on.

What a difference one year makes Bud. The work ethic Dupree displays, along with his passion for the game of football and mental aspect of wanting to get better, will push him to become an all-time Steelers great in the future. Chuck Smith has helped many NFL stars get better over time and I can say with certainty that Dupree is one of those athletes that will have a breakout season if he is healthy in 2017.

Take a look at Arizona Cardinals outside linebacker Markus Golden. Spending three seasons with Smith has definitely improved Golden’s play, and in 2016 he registered a career high 12.5 sacks, four forced fumbles and was a wrecking machine alongside teammate Chandler Jones (who managed to earn 11 sacks).

Golden was drafted in the second round of the 2015 NFL draft. In his rookie campaign he registered four sacks like Dupree did in his rookie season. If it wasn’t for the groin injury that Dupree sustained (which caused him to miss the first half of the season) there is no doubt that he would have come close to double-digit sacks in 2016.

Just imagine a fully healthy season for Dupree in 2017, I am projecting that he reaches double-digit sacks and becomes a consistent threat on the defensive side of the football. With veteran leader Cameron Heyward back in the lineup after missing last year with a torn pectoral, there is no doubt that his presence will open up so many opportunities for Bud to destroy offensive lineman for years to come.