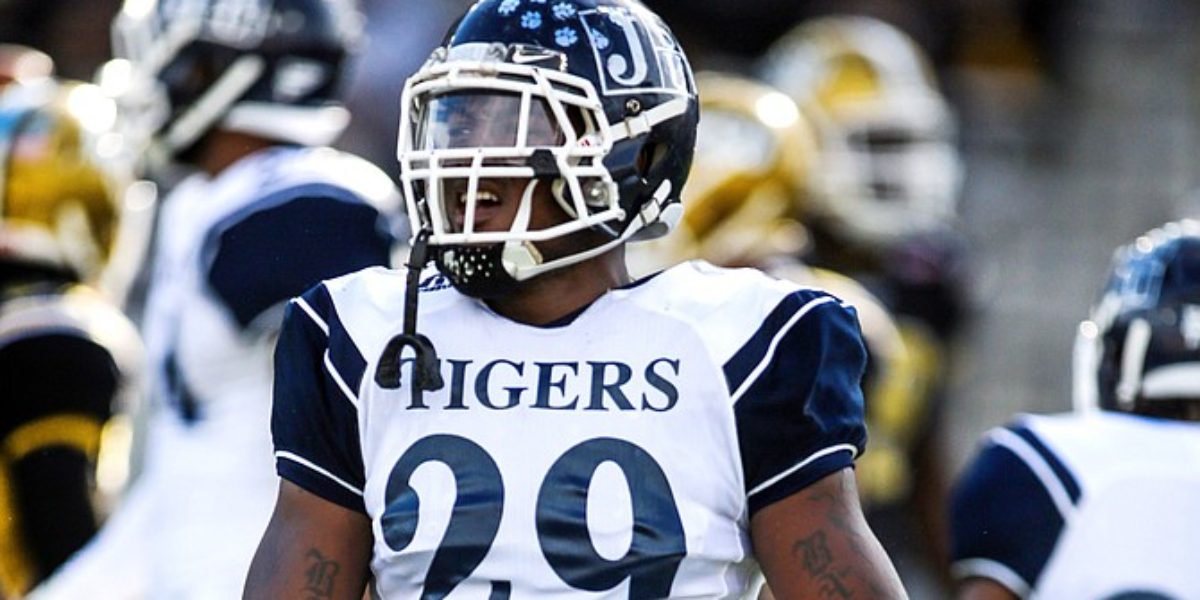 Javancy Jones is a name that some of you may have heard by now. The enticing edge prospect in this year’s NFL Draft has been seeing his stock rise as of late, and he is very much on the Pittsburgh Steelers radar.

Jones had his pro day at his school, Jackson State, last Friday and according to Javancy on Twitter, the Jets and Steelers were two of the teams represented. Although attending a smaller school, Jones has been jumping off the stat sheet since arriving on campus: in 2013, he was awarded conference freshman of the year in the SWAC.

Some scouts could knock Jones for his level of competition (similar to Derek Rivers from Youngstown State), but everyone doesn’t know that the decision to attend Jackson State was his. Javancy had offers from other division one schools but decided to attend JSU so he could remain close to his mother who needed him while battling a sickness.

Recently I spoke with Javancy Jones, who came off as a very respectable, enthusiastic, and hungry NFL prospect.

As previously mentioned; normally, scouts and teams alike view lower levels of competition as a “knock” on a player, or “negative trait.” So, I asked Javancy to flip the script and tell me an advantage of playing at a school like Jackson State.

I was not surrounded by 4-star and 5-star recruits, so you really get the attention you deserve as a player from your coaches.

He also told me that he believes he didn’t reach his ceiling while playing college ball there, and the best is yet to come. (Call me crazy but I think coach Joey Porter can be the man to help in that area.)

This current class of edge rushers has all different shapes and sizes. Some say as many as five or six players could be taken in the first round. This got me thinking about who performs certain pass rush moves well, and who doesn’t. Jones displays the ability to sneak into the opposing backfield quite frequently on his tape. In fact, Jones led the nation in tackles for loss as a junior and has 77 tackles-for-loss in his career.

I asked Javancy what his favorite pass rush move was. The young man quickly and confidently replied “swim move!” followed by “ya you get them with the outside, then inside.”

I could literally feel his enthusiasm through the phone answering that question. Javancy Jones is a swim move kind of guy, but he is also willing to rush from a stand-up role, as well as from down in a stance, otherwise known as “hand in the dirt.” When I asked Jones which he would prefer, the linebacker responded, “Honestly, I can do both.”

If you haven’t already started searching for Javancy Jones highlights, don’t be alarmed when you discover he wears 29 as his jersey number.

I found this unique for an outside linebacker, even at the college level. “Why number 29?” I asked. Jones kind of chuckled and explained that he was given the number way back in second grade! He was given that particular number because as a young buck, he was asked to play both offense and defense.

Learning that Javancy used to play both sides of the ball was interesting, although not too surprising. That is because the young man is in superb shape. His hustle and effort on every play instantly jump out on his tape. And not just on his regular season tape either.

I asked him if there were any secrets to the shape he was in, even hinting at P90X (in a joking manner) but Jones told me there were no secrets, and he has always been told that you can’t teach his effort or speed. You’re born with it.

He goes on to tell me that he just wants to give every single play his “all”, constantly going at “100%” and playing like “no one else is even around.”

I can certainly dig that kind of attitude in Pittsburgh. Being a rookie in the Steel City, you’re expected to come in with that kind of attitude, even on special teams! And don’t worry about that coach Danny Smith, because Jones has experience blocking two punts while at Jackson State.

It’s no secret that the Pittsburgh Steelers are in need of edge rushers. So much so, that some think they will even “double-dip” and select two in this draft. On top of being a tackle-for-loss machine, Jones tallied 18.5 sacks while at school.

Clearly, he has a nose for the quarterback. Time to develop his skills are needed, but there is plenty of reason to believe that Jones can be Pittsburgh’s guy for a double-dip draft scenario.

When the pre-draft process began, Javancy Jones was viewed by most as a late, 6-7 round prospect. But after reviewing as much film as I could find, and speaking with him, I firmly believe this kid has helped his own stock. I wouldn’t be surprised at all if his name was read off in the fifth round for Pittsburgh.

Well, in 2016 the Steelers had no fifth round pick thanks to a trade for CB Brandon Boykin. However, after the draft, news broke that Pittsburgh was aggressively trying to trade back into the fifth round to select a project edge rusher, Travis Feeney. Luckily for them, Feeney lasted until the sixth round. Unluckily, he was signed off Pittsburgh’s practice squad toward the end of the season.

But my point stays the same: If the Pittsburgh Steelers see the fifth round as the time to pounce on project players they are high on, I think we may have already figured out the name on their card: Mr. Javancy Jones.