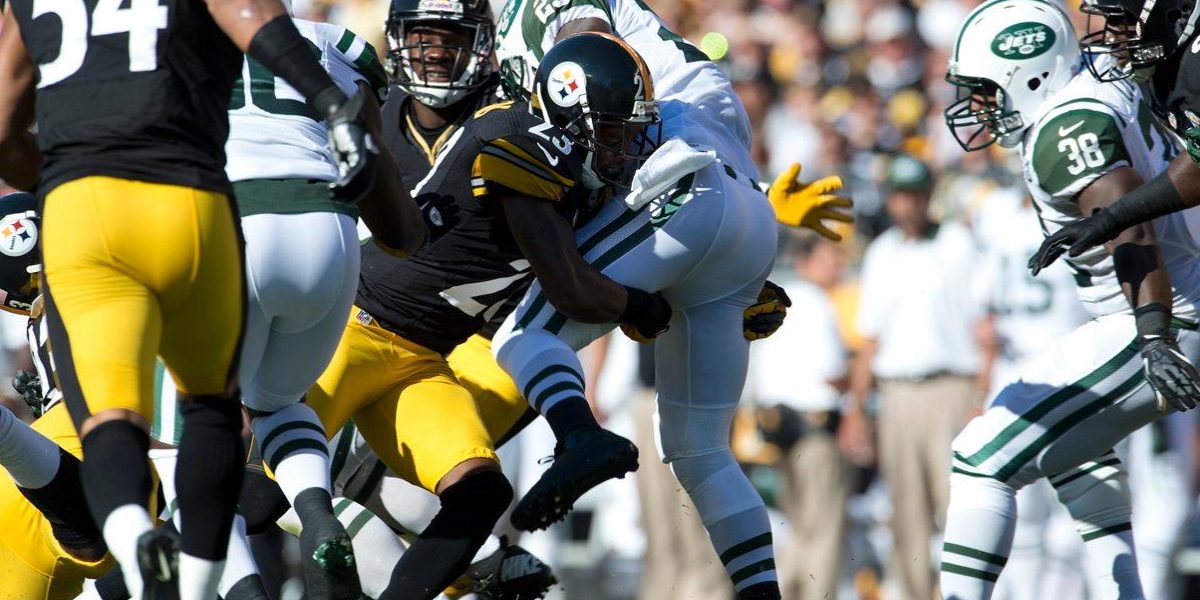 Steel City Underground is doing a series where we will break down each instance of double-dipping in the NFL draft during the Mike Tomlin area. By double-dipping we mean drafting two players of the same position. This has happened much more than most may think, which is detailed in the original article. We will be taking a look at the rosters prior to those players being drafted along with whatever happened with these players.

Lewis had rare height and a lanky frame as a 45-game starter for Oregon State and was overshadowed in pre-draft analysis by teammate Brandon Hughes. Pac-10 teams opted to throw away from Lewis and the Steelers, coming off of another Super Bowl Championship, were looking for mid-rounds talent. Lewis had quick feet and instincts, which had NFL.com stating he “could ultimately be a better NFL corner than players drafted ahead of him.”

Burnett was a strong, confident overachiever considered to be a Tampa-2 corner by NFL scouts. What he lacked in height, Burnett added with excellent field vision and athletic ability. Burnett’s NFL.com draft profile showed that concern lingered that he would do better in a zone defense with over-the-top help and lacked elite speed and heft to go toe-to-toe with tall speedy receivers. He was seen as a marginal returner at the pro level.

Defensive backs coach Ray Horton liked what Burnett showed the Steelers. “When you look at him statistically, he is very productive,” Horton offered in a post-draft press release. “He is a return man – both kickoff and punt – and he gets interceptions…We expect him to be a playmaker for us in a multitude of ways.”

Joe is the type of player who isn’t as big as Keenan, but he is a guy who is a little more elusive and a better athlete at the ball with his return abilities. It is a good mix having a big, strong corner and having a smaller, athletic corner. It’s a good balance to have on your team.

The Steelers came away from their Super Bowl XLIII win with a clearer vision of where their true needs were. Many insiders assumed Pittsburgh would go heavy on the offensive line again due to the poor upfront performance against the Arizona Cardinals in the championship. Some truly explosive receivers were next on many mock drafts. Where they were thin was the defensive backfield, but picking at the bottom of the board would prove tricky in terms of meeting their requirements. William Gay was developing in the system and with Ike Taylor ensconced, Pittsburgh let Bryant McFadden walk away during free agency. Deshea Townsend was on his last laps.

The Steelers had an opportunity to make a risky yet bold move – and they did. In retrospect, Pittsburgh made the most of a bust-riddled class when they traded their second- and fourth-round picks to the Denver Broncos for two third-round selections. At 96th overall in that third round, they grabbed Lewis. In round five (168th) they added Burnett.

The 2009 class turned out some debatable talent with few impact players. It has been referred to as one of the most disappointing classes in the last decade and even the last quarter century per NFL.com (ranking third).

The Steelers could have gone offensive line but four tackles and two centers were gone before pick 32 arrived. Out of those six players, Alex Mack visited with Pittsburgh but was a top-tier center who never would have fallen that far. They also met with Max Unger and A.Q. Shipley; Unger went to Seattle as an offensive line slash utility, not a true center, in the second round. Shipley was selected out of nearby Penn State in the seventh instead but never blossomed in Pittsburgh and was released and then signed to the practice squad after training camp. He would move on to the Philadelphia Eagles next before becoming a journeyman backup. With Greg Warren listed as their only center, the Steelers at least had to address a need for depth.

Malcolm Jenkins (Ohio State) was the first defensive back selected (14th overall, New Orleans Saints) with Davis getting drafted by the Miami Dolphins. The next defensive backs to come off the board were Delmas (33rd, Detroit Lions) and Patrick Chung (34th, New England Patriots). After the Steelers opted to trade away their second round, they watched (Alphonso) Smith, Darius Butler, Jairus Byrd, Mike Mitchell, Darcel McBath, William Moore and (Sherrod) Martin go to other teams.

Lewis didn’t earn his first start for the Steelers until 2011 but became a starter at left cornerback the following season with the departure of Gay to Arizona. In 2012, Lewis had a breakout season and recorded 71 total tackles with 23 passes defended in 16 games. It was an MCL sprain that sidelined Lewis during the Dec. 30, 2012, game and although it was reported at the time that Lewis would not require surgery, the Steelers were not 100 percent sure he would be healthy and available. Lewis signed with the New Orleans Saints in 2013 and was a longshot to return to the Steelers to fill a hole once again in 2016. Lewis did not pass inspection due to numerous injuries, including a nagging hip issue and did not receive an offer.

Burnett watched his opportunity to play at the cornerback position vanish nearly as quickly as his return chances due to the emergence of running back Stefan Logan. Burnett had 15 tackles, four passes defended, a blocked field goal and an interception at the end of the preseason. Officially, he is recorded as having three kick returns for 23 yards in 15 games that regular season with three tackles and five assists. The Steelers released him on September 3, 2010, to meet their 53-man roster cutdown.

The 2009 draft selection results for Pittsburgh were as follows:

2009 could be considered a bit of a mix for the Steelers when it came to securing long-term talent. They utilized Wallace in the offense and David Johnson has spent several seasons with the team on separate stints. That Lewis and Burnett made the team showed they filled a requirement at that time.

There are years when the draft simply helps fill gaps in the roster rather than build the team of the future. Even though it would be easy to speculate that the Steelers may have lost opportunities by trading away two rounds of picks, a good hard look at the entire class shows that Pittsburgh did what it needed to in order to be competitive and enter an era of rebuilding.