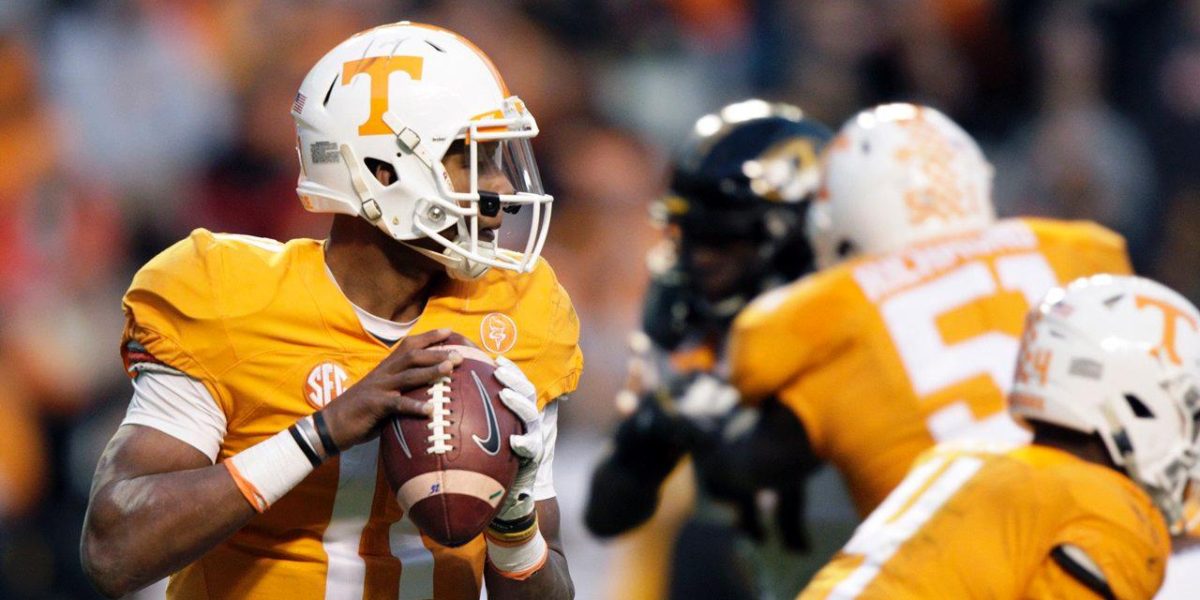 Who was QB Joshua Dobbs drafted to replace?

The Steelers ended months of speculation about whether or not they would select a quarterback in the 2017 NFL Draft during day three of the pro football extravaganza when they picked Tennessee quarterback Joshua Dobbs in the fourth round.

Dobbs is an intriguing prospect. He is an incredibly intelligent student-athlete who majored in aerospace engineering. He’s a larger quarterback (6’3″ 216 lbs.) who can score in the air (27 touchdowns last season) or on the ground (12 rushing touchdowns). He also threw a dozen interceptions.

Not much will be expected of Dobbs in his rookie season, and perhaps future seasons. As the Steelers potentially head to training camp with four quality quarterbacks on their roster for the first time in years, one has to ask: who was Dobbs drafted to replace?

Everyone made a meal out of Ben Roethlisberger’s “reflection” comments following the AFC Championship game earlier this year. Those comments were interpreted by many to mean that Big Ben could retire sooner rather than later, and caused a panic which grew into a “draft a quarterback now” mentality.

However, I’m not one to believe that Roethlisberger will be going anywhere, anytime soon. He is signed through the 2019 season and having just turned 35, will only be 37 years old when he enters the final year of his contract.

That’s hardly old in quarterback terms, depending on the quarterback.

Carson Palmer turns 38 in December. Alex Smith and Aaron Rodgers, but taken a year following Ben’s draft, will be 33 this season. Eli Manning is 36, and Philip Rivers is 36 in December: both were drafted the same years as Roethlisberger.

And of course, Tom Brady is the elder statesman of the NFL quarterbacks, turning 40 in August. Drew Brees isn’t far behind, having just turned 38.

All signs point to Big Ben playing as long has he wants to. But does that mean he’ll hang it up in enough time for Dobbs to get a chance at playing?

Let’s take the contract scenario, for example. The Pittsburgh Steelers generally extend their quarterback contracts two years prior to their expiration. There was a little panic when it came to Ben’s contract last season, so there’s a chance the front office waits longer once again and extends Ben in his final year (or later perhaps). However, that is not the trend.

Should Ben receive a new deal before 2019, it means that Dobbs’ rookie contract will be up before he ever sees the field (barring any setbacks to Ben of course). Dobbs will be signed to a maximum four-year deal, which would keep him in a Steelers uniform through 2020; a year after Ben’s current contract expires.

Turning 38 for the 2020 season, it’s possible Roethlisberger could have a few more years left in the tank. All of that depends on injuries, family, and a chance to make history. If Big Ben starts winning Super Bowls, would he simply walk away? Or will he try to play a few more seasons like Brady, Brett Favre and Peyton Manning all did?

If Ben does, Dobbs would not be his successor. And the Steelers front office already knows this.

Jones is an unpopular guy in Pittsburgh, at least with the fans.

The current backup quarterback for the Steelers enters his fifth season following the expiration of his rookie contract. Like Dobbs, he too was drafted in the fourth round to add a developmental quarterback to the roster behind Big Ben.

Landry’s growth was slow, but he has proven to be a reliable backup quarterback (no matter what some of the fanbase has to say). He is literally the argument for how Dobbs’ career could end up: a third-stringer waiting for an opportunity to start in spot duty.

Due to the Steelers bringing Jones back on a new two-year deal during free agency, I don’t see them cutting ties with the former Oklahoma quarterback anytime soon. The only thing that could currently unseat Landry would be a miserable preseason and/or an injury that would cause him to miss significant time (see Bruce Gradkowski).

Otherwise, Jones is here to stay.

Jones entered last year’s preseason as the number two quarterback behind Roethlisberger but was expected to compete with Gradkowski for the backup job.

Once Bruce G. landed on IR, the Steelers struggled to find someone who could even throw the football besides Jones in their remaining exhibition games. They went through quarterbacks Dustin Vaughan and Bryn Renner, neither of which were very impressive.

Then they made a bold move, claiming former Titans and Chargers quarterback Zack Mettenberger off waivers before the start of the regular season.

Critics of Landry Jones rejoiced, but Mettenberger wouldn’t throw a single pass last season. My gut tells me there’s a good reason why.

First, the Steelers wanted to give an opportunity to Jones. They wanted to make sure he was a capable backup, and he proved so against the New England Patriots and an overtime victory over the Cleveland Browns in the final week of the regular season.

Second, I doubt that Mettenberger was prepared to play yet. Offensive Coordinator Todd Haley has a complex playbook which any player missing an entire training camp would likely struggle with mastering in enough time to supplant any incumbent member of the roster.

Third, and this is just my gut feeling, I believe the coaches have seen enough of Mettenberger in practice to know what he is.

And what he is isn’t Roethlisberger’s eventual heir.

That leaves Zach at most risk of losing his roster spot at this time. There will be a camp battle between Jones, Mettenberger, and Dobbs, however, it will more than likely come down to the latter two to see who holds the clipboard this season.

This could be especially true as Mettenberger has one year left on his contract.

While it’s possible that Dobbs eventually takes Jones’ spot as well, I would expect there to be a progression based on Dobbs’ own progress. If he’s capable and shows improvement, he would first win the third-string job, then take over as the backup once Jones’ contract expires in 2018: making him Big Ben’s backup in 2019, the future Hall of Famer’s final year on his contract.

But by then, don’t be surprised if Dobbs isn’t competing with another young gun for the very same spot… and potentially leaving Pittsburgh without having fulfilled fan speculation that he could be Big Ben’s replacement.

Well, we can stop speculating! Mettenberger has been released as of May 1st around 2pm local time.

One response to “Who was QB Joshua Dobbs drafted to replace?”