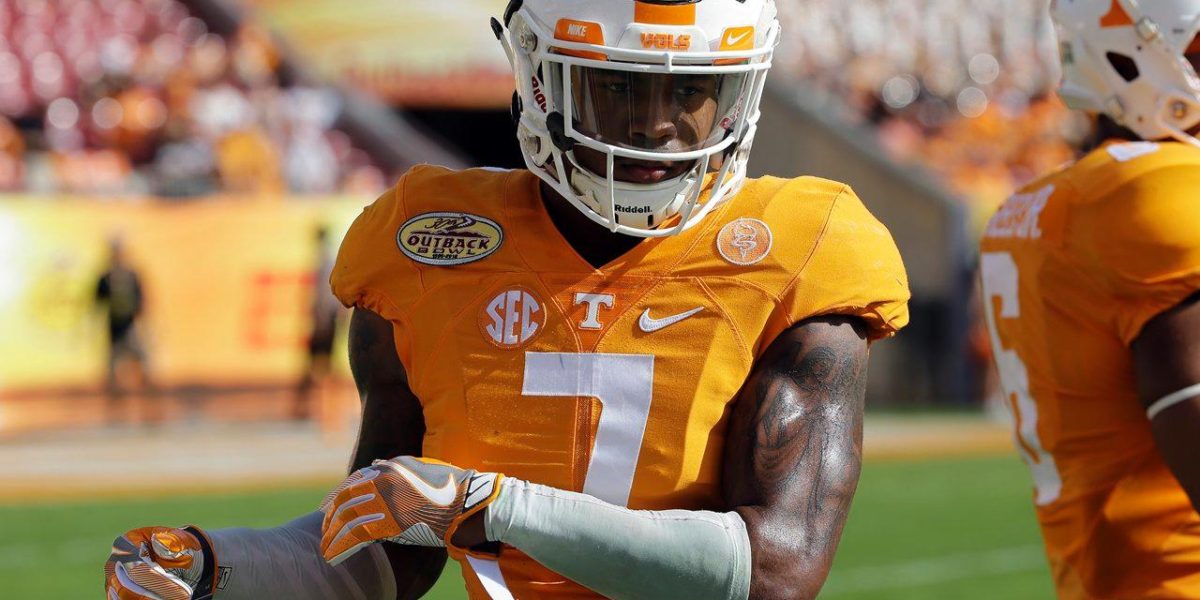 A second round selection would be a sort of déjà vu moment from the 2015 draft when the Steelers selected University of Mississippi corner Senquez Golson in the second round, only to have him miss two full seasons due to injuries. With Golson’s status uncertain, everyone was asking: who will cover the slot position where William Gay (now 32-years of age) played last year?

Let’s dive into some film on Sutton and just why the Steelers drafted him in the third and how he could end up being a starter for years to come due to his high football IQ, and excellent man-coverage ability, something desperately needed in the Steel City.

Pick-Six As A Freshman Cornerback:

William Gay would be extremely proud of this play as he is the master of the pick-six. Sutton registered an interception returned for a touchdown versus Western Kentucky in 2013 when he was just a freshman athlete. You can never start too young.

Now a third-round selection by the Steelers, Sutton hopes to provide the team with more plays like the one above to propel Pittsburgh to the Super Bowl, with the goal of winning their seventh Lombardi trophy.

What made the play happen was Sutton realizing the ball was floated and that he had enough time to jump the route. Quarterback Brandon Doughty had to heave the ball from the far hash to try to hit his receiver who was running a hitch route.

As you can see, Doughty does not have the arm strength to make this difficult throw and should have never even attempted it. The ball was intercepted by Sutton and returned for a 36-yard touchdown.

Against Bowling Green State University in 2015, Sutton showcased a vicious hit on the running back, who was running a screen route.

In a third down and long situation, offensive coordinators either run a draw play to hopefully gain enough yardage to convert or their offense runs a screen route with the same goal in mind. Either way, Sutton recognized that in this long scenario that the play was about to happen and reacted quickly to blow up the screen.

It’s plays like this that the Steelers definitely need to improve on after allowing several screens in 2016 for huge yardage, some even touchdowns that should have never occurred. One that may come to everyones mind is against the Dallas Cowboys in week 10, when Ezekiel Elliott took one 83 yards to the house.

Sutton’s role on defense is going to be simple: he is a physical corner that can hit athletes while making splash plays. A recipe for success in Pittsburgh.

In only 45 total career games played at Tennessee, Sutton accomplished big goals as he set the school record with 127 tackles, 37 pass deflections, seven interceptions, three forced fumbles and three fumble recoveries. To say that he was all over the field might just be an understatement. He was the heart and soul of the Vols’ defense and created big turnovers when his team needed him the most.

In the above play against the Georgia Bulldogs in 2014, Sutton displayed excellent ball skills and went up and intercepted the football. As the commentator mentioned, Sutton doesn’t play the receiver but rather the ball. Maybe this is why he broke up 37 passes and earned seven interceptions in his four-year career at Tennessee. If you want physicality at the corner position, Sutton once again is the man for the job.

Pass breakups are just as good as interceptions, in my opinion. The opponent has a chance to make a big play and Sutton, as the defender, seems to always prevent that big play from occurring with truly excellent recognition due to his high football IQ.

When Tennessee played the Alabama Crimson Tide in 2015, Sutton almost had a goal line interception. The play was nearly identical to Malcolm Butler’s game-winner in the Super Bowl just a few months prior to this game.

Sutton is lined up on the outside covering the right side receiver, Calvin Ridley (#3). The left receiver T.J. Simmons (#16) jams Malik Foreman (#13) the cornerback in front of him. This opens Ridley (#3) for a split second. Sutton reads the play all the way and picks up Ridley, jumping route just in time to break up the pass. Its plays like these that make me truly excited about Sutton and what he will bring to the Steelers defense in the upcoming future.

As you can see, Sutton is a very intelligent young defender that hopes to help an up and coming secondary improve their play. He will bring true physicality at corner as he played press man-to-man his entire career at Tennessee.

The cornerback battle at training camp this summer will be one to watch. If Sutton truly impresses the coaches, he and Ross Cockrell just might split snaps at the outside position in 2017, setting up what could be an interesting future for Cockrell, who signed just a one-year tender this offseason.

All in all, I expect Sutton to learn how to operate in the slot this summer, as he rarely played the position in college. This hopefully sets up the organization to finally cut ties with Senquez Golson and William Gay, as they just drafted two young and promising defenders in Sutton and fifth round CB Brian Allen. We will have to wait and see but the film does not lie and fans should be excited for the future of this secondary.