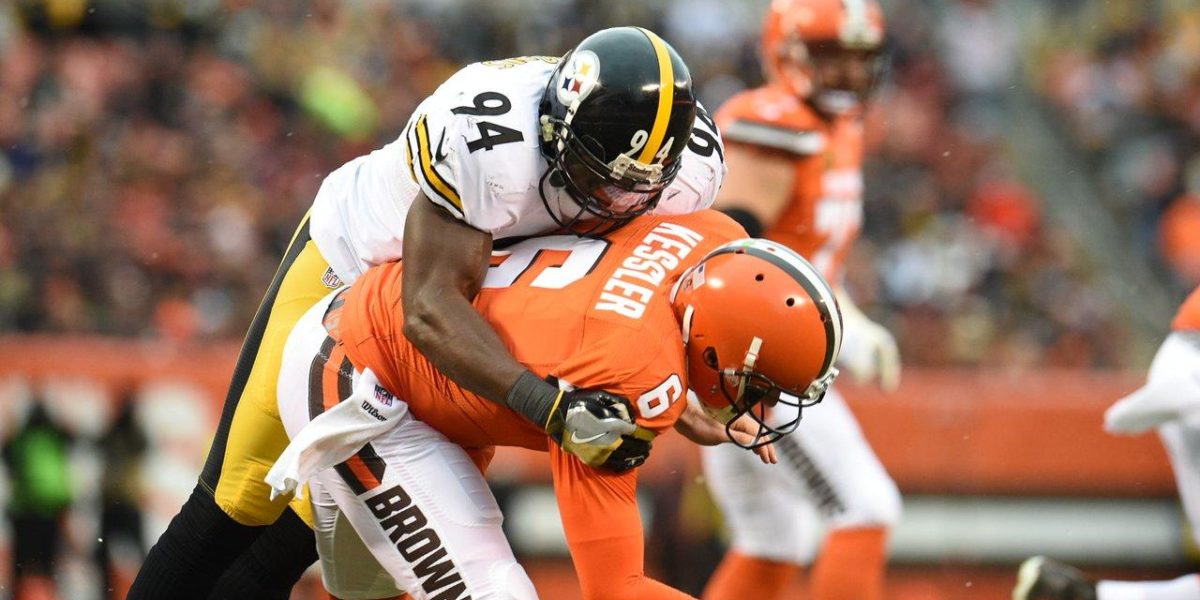 After losing four straight games and dropping to a 4-5 record on the season, this is the game the Steelers needed.

The defense was next-to-last in the league in sacks heading into the game, and everything else about the team looked wishy-washy at this point in the season. Fans were calling for Mike Tomlin’s head (which happens anyway) and abandoning hope for a playoff run.

Looking back on the season, this was a good spark started against a bad team, igniting a nine-game win streak. It started with a sack party on a pair of Browns quarterbacks (Cody Kessler and Josh McCown). Where the defense had no pass rush prior, the Steelers amassed eight sacks against a porous Cleveland offensive line. James Harrison also became the all-time franchise sacks leader as part of the “party”.

However, the game was a bit rough around the edges from the get go. The wind and cold made throwing difficult and grounded the Steelers offense, which still pounded Cleveland’s D. Le’Veon Bell finished with a career day, rushing for 146 yards and a touchdown while catching eight passes for 55 more yards.

The Browns threatened to score early, but Artie Burns picked off a pass in the first quarter. The Steelers chewed a lot of clock following the turnover, but could only finish with a field goal.

The Steelers were still mustering field goals if they were mustering much at all in the second half. The Browns finally got on the board with a field goal of their own, which was matched by Chris Boswell.

The score remained a 14-point edge by the Steelers at 17-3 entering the fourth quarter. Cleveland continued to be a nuisance, with McCown connecting with TE Gary Barnidge for a 14-yard touchdown with 9:45 remaining in the game. However, Cody Parkey missed the extra point attempt, giving the Steelers an eight-point cushion.

Then the floodgates opened. The Steelers became a fortress of defensive solitude, decimating the Browns offense. Ryan Shazier buzzed around the field, wrecking havoc, while several plays were negated by questionable penalties (including a Sean Davis fumble return for a touchdown).

However, the play below was the final nail in the Cleveland coffin this Sunday, as the Steelers secured a 24-9 victory, ending the over month-long bleeding, and unknowingly, steering their season’s ship back into the proper direction.

With just under four minutes left in the game, the Browns were trailing by eight points. Josh McCown had led Cleveland to their first touchdown five minutes earlier and looked to close the gap on this drive.

However, the Steelers defense had different plans, as Ryan Shazier creates a turnover that Javon Hargrave would scoop up for a game-clinching touchdown!