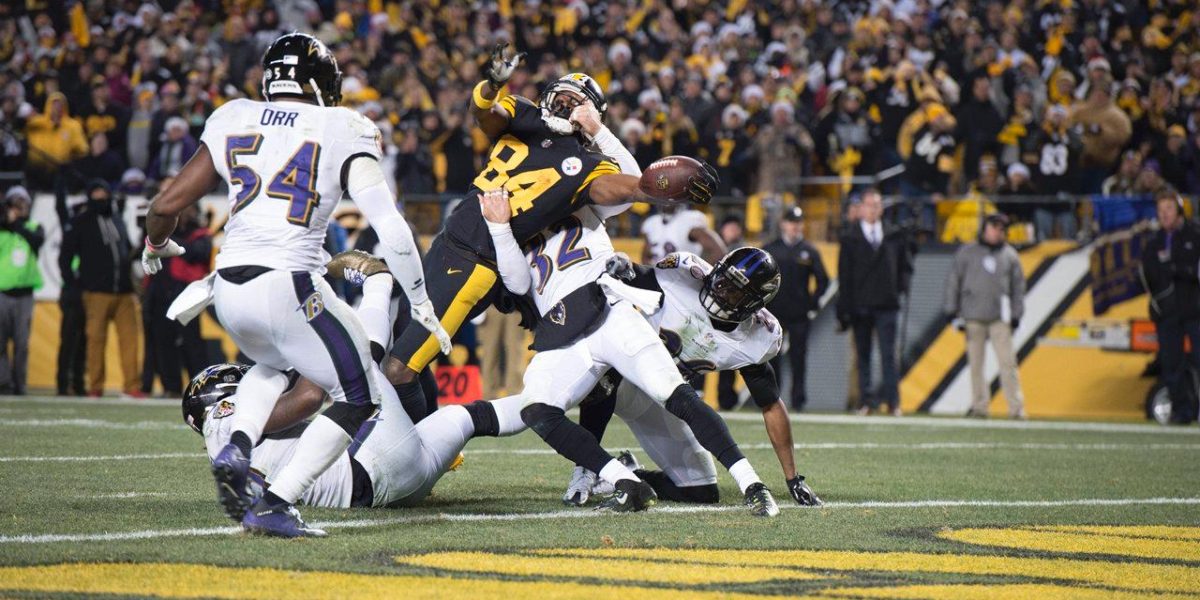 If you asked any Pittsburgh Steelers fan what gift they wanted for Christmas, I bet they would’ve replied “A win against the Baltimore Ravens”.

As odd as that may sound to a casual sports follower, it was not odd for the black and gold faithful who came out on a Christmas Day afternoon to watch their beloved team face their bitter rival. The extra ambiance of red and green was furthered by a new color rush uniform highlighting more black than gold.

The setting made for a “Black Christmas” in Pittsburgh, which could be construed as a good or bad thing. The Steelers had righted their lost ship of a season heading into Week 16’s de facto “AFC North Championship” game. They had started 4-5 but ripped off five consecutive victories to rise atop the division with a 9-5 record, one game ahead of the Ravens. A win would send either team into the playoffs with a home game, and the loser to the outside looking in.

The game began with a bang as the Steelers marched down the field, chewing up half of the first quarter with a 9-play, 87-yard drive which ended in a Xavier Grimble touchdown. The Ravens would respond, as each team tended to do on this holiday. First Baltimore kicked a field goal to close the gap to a 7-3 Pittsburgh lead. Each team would punt several times before Baltimore attempted another field goal; and in rare fashion, fumbled on the try. They would get another chance with 22 seconds left before half, this time succeeding in being a thorn in the Steelers side, with the latter holding a one-point edge as the teams entered their respective locker rooms.

Misfortune would strike the Steelers on the very first play of the third quarter when Ben Roethlisberger threw an interception. The Ravens would receive the ball at Pittsburgh’s 20-yard line and within three plays, score a touchdown. A two-point conversion would flip the tables in the Ravens favor with a 14-7 lead.

The Steelers threatened on the next drive but stalled just outside of the red zone. A 36-yard Chris Boswell field goal kept the game close with Baltimore still ahead 14-10, but the Ravens kicker, Justin Tucker, would knock in a 46-yard try and widen the gap back to seven points, before Big Ben was again picked off, leaving the Steelers with a short field to defend.

Yet, unlike other instances at Heinz Field throughout the season, the Ghost of Christmas Past would fail to make an appearance as the Ravens were held four yards from the goal line, and had to settle for another Tucker field goal as the fourth quarter started.

The Ravens were up 20-10, but not for long. All the Steelers needed was 2:37 to drive 75 yards for a Le’Veon Bell touchdown. The game inched closer, with the Ravens now holding onto a 20-17 lead.

The Steelers defense once again rose to the occasion, holding Joe Flacco and company to a three-and-out, forcing a punt, and allowing Pittsburgh to capitalize on another sub-three minute Bell touchdown drive, taking a 24-20 lead with nearly seven minutes remaining in regulation.

The Ravens tried their best to eat the rest of those seven minutes but would score with just a little over one minute left, taking a 27-24 advantage and giving the Steelers offense only 1:18 to attempt to orchestrate a victory. Little did they know the type of conductor Ben Roethlisberger was, as he carved through the opposition with eight completed passes (and two spikes to stop the clock):

The plays led up to a touchdown which will forever live in Pittsburgh lore, as the Steelers defeated their rivals 31-27.

Plays of the Game

The Steelers methodically moved down the field, where Ben Roethlisberger went through his progressions and threw a strike to tight end Xavier Grimble. The touchdown was the first points on the board that day and set the tone for the remainder of the game.

That tone is that the Steelers could not be stopped.

This play of the game, and perhaps all of the 2016 season, secured the division title for the franchise, and a guaranteed spot in the postseason. Borrowing its name from another famous Pittsburgh play, the “Immaculate Extension” may become the defining moment of Antonio Brown‘s career.