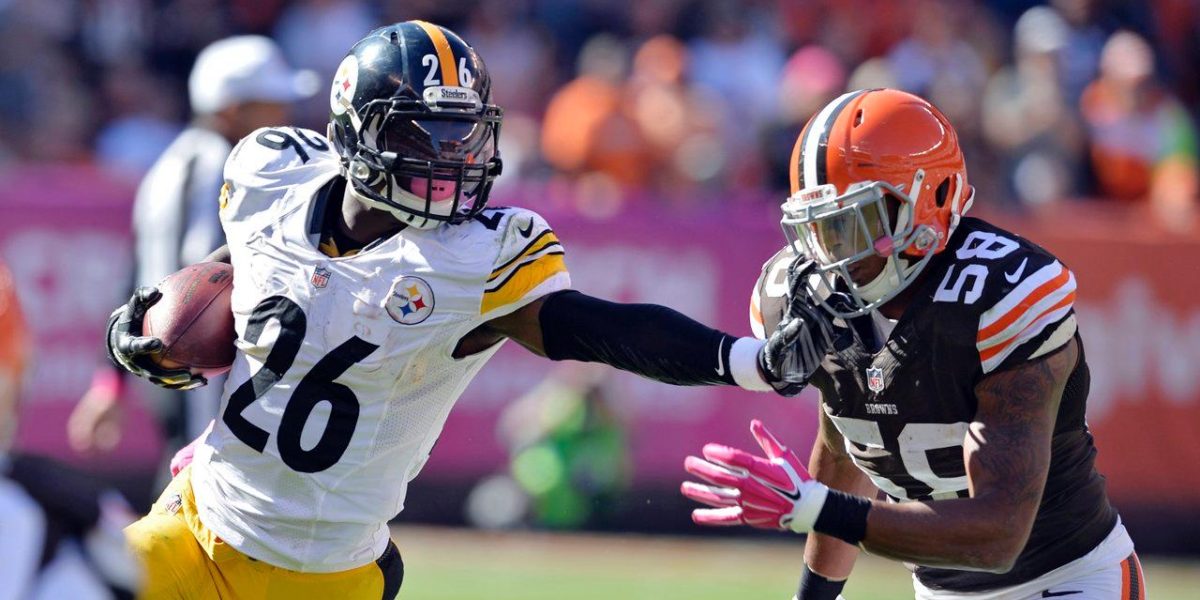 Le’Veon Bell is the exception to not paying running backs

As the NFL keeps evolving year after year into a passing league, the position of running back figures to keep being undervalued. At least that is the current trend. It’s relatively easy to find above average production from a back without a big money commitment.

However, there are a handful of running backs in the league that aren’t just solid contributors – they are elite game changers. And arguably, the most elite of them all is Le’Veon Bell of the Pittsburgh Steelers.

With training camp looming in late July, and a deadline to meet regarding a contract extension before that, all eyes are on Bell and the Steelers. What direction will they go? Will a deal get done? Is it worth it to pay a back top dollar when production can be found for a much lower price tag?

Currently, Bell is franchise tagged by Pittsburgh, which means if a long-term deal isn’t reached by July 17th, he will play under a one-year deal for $12 million and some change. There’s always the unlikely chance that Bell holds out for an extension, but $12 million is roughly 25 percent more than the next highest paid player at the same position, Buffalo Bills running back LeSean McCoy.

Is Bell worth an expensive investment?

Not only is he an elite running back, he is a gifted pass catcher. He could legitimately play as a wide receiver and has lined up as one on the field. He runs real routes as opposed to the screens, flat routes, and dump-offs we see most backs catch. Simply put, Bell is an elite threat no matter where he lines up on the field. A game changer in every sense of the word.

Then there’s the future after Ben Roethlisberger retires and Antonio Brown actually starts to decline. Bell is only 25 years-old. He has a tremendous work ethic, and in a perfect world has 5-6 years left of high-level play. Somebody has to bring some stability and reliability to the offense when a new quarterback takes the reigns and Brown isn’t there to dominate.

The counter argument is that Bell has to be on the field consistently, which he hasn’t always been throughout his young career. He’s missed multiple games due to suspensions and injuries and has only played one full season: and in that “full” season he was injured in the final game and could not participate in the postseason.

This is the bargaining chip the Steelers can lean on when figuring out a number that is agreeable for both sides.

If Bell plays the 2017 season under the franchise tag, he will be the highest paid back in the league, as he should be. However, it would behoove Pittsburgh to lock him up long-term before training camp. The two highest paid backs in the NFL behind Bell’s tag salary are McCoy, and Carolina Panthers running back Jonathan Stewart; both of whom will make $8 million this year.

Doing some math, Pittsburgh could offer Bell something in the four-year, $38-40 million range, with around $20 million in guarantees. This type of deal would be fair to Bell, while not grossly overpaying him because of the aforementioned reliability issues. There’s no question he should be retained long-term, and his new deal would set the running back market. Anything around $9.5 to $10 million per year is a good chunk more than the current top backs are being paid – I believe Bell should have no problem with that.

However, Bell’s 2017 salary would be fully guaranteed under the franchise tag. That’s a guaranteed $12 million this season, and should Bell and the Steelers fail to come to terms on a new deal, his 2018 tag number would command even more guaranteed money. This appears to be the difficulty: both sides must agree on the guaranteed money, plus the base amount over the life of another contract. But the benefit of securing a long-term deal now, rather than wait to play under another tag, is that no one can predict the future.

Hypothetically speaking, of course, his best bet may be securing the money now rather than later. If Bell were to get seriously injured this season (God forbid) he could end up being a risk to tag in 2018. Kelvin Beachum was a player the Steelers wanted to lock up for a long-term deal in 2015, but gambled not signing a new contract before the season, and wound up losing his spot on the team following an injury and the emergency of his replacement, Alejandro Villanueva. (Beachum was never going to be tagged, but I wanted to point this out as an example of not knowing one’s own future.)

Regardless, Le’Veon is will become the highest paid running back in the league, setting the market for future players at the position.