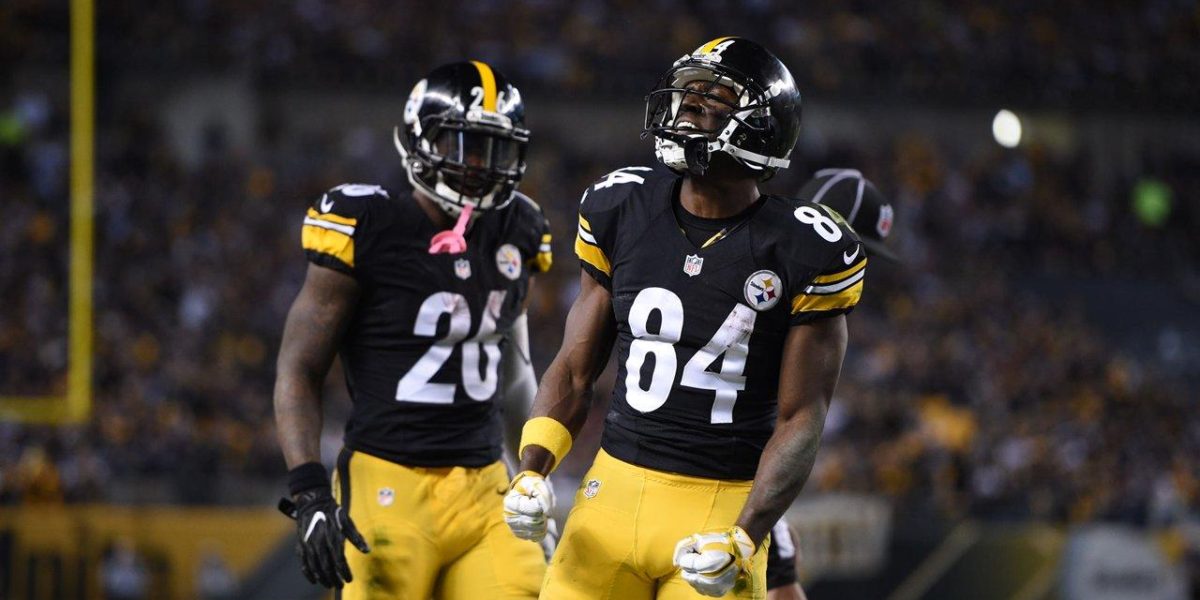 Heading into the final ten names to be unveiled in the NFL’s 2017 Top 100 list, it was no surprise that Antonio Brown and Le’Veon Bell should have their names mentioned among the league’s best players. What might be surprising is that neither player, as supposedly dictated by a vote of their peers, is considered the best at their position.

Let’s dig into where each Steeler would up in the rankings, and who went ahead of them.

Let’s constructively think of this. Oftentimes people will claim that Julio Jones and Antonio Brown are interchangeable. They are both the best.

During last night’s unveiling of the top ten players in the NFL Top 100, Jones edged out Brown as the 3rd ranked player in the league. Antonio was one spot lower, coming in as the 4th ranked player for the second straight year.

But in 2016, Antonio Brown was far more dominant of a player. Had AB played the regular season finale, a game in which the Pittsburgh Steelers sat their starters (including Brown) against the Cleveland Browns, he may have led the league in receptions. As it stands, he played one less game than Arizona’s Larry Fitzgerald and ended up one catch shy of being the leader.

Jones, on the other hand, was the second-best in receiving yards, tallying 1,409 yards to Brown’s 1,284. Jones did so playing one less game than Brown as well, but could only score half as many touchdowns (6) to Antonio’s dozen (12).

The two receivers have gone back and forth in every major statistical category for several seasons, so I can’t quite argue Brown being named the 4th-best player in the NFL: but I still believe he has the right be the top-rated wide receiver.

Odell fell several spots lower despite scoring double-digit touchdowns and having 1,367 yards. He caught five fewer passes than AB but dropped more passes thrown his way. Still, Beckham Jr. found his way into the top ten, albeit over another Steeler I felt should have ranked higher.

If you wondered who votes for this list, you might want to ask Jerry Jones. Oftentimes when I get into a spirited conversation about the Top 100 list each year, I’m reminded it’s not “all about last season”. You’re supposed to make an educated guess on the upcoming season and base it on a player’s overall body of work.

However, Ezekiel Elliott only has one season to draw conclusions upon. That year was an outstanding rookie campaign that saw the Cowboys running back run for 1,631 yards and score 15 rushing touchdowns. He also caught 32 passes for 363 yards and added a receiving score to his totals.

Those outstanding numbers should be enough to be the king of the hill at his position if it weren’t for Le’Veon Bell. Bell ran for 1,268 yards but only scored seven TDs… in three less games. In fact, Bell ran for exactly three fewer yards per game on average than Elliott, but that’s where the comparisons end, as Bell smoked Dallas’ feature back in the receiving area, catching over double as many passes (75) and also doubling-up on the receiving touchdowns (2).

Did I mention he did that in three fewer games?

Bell’s 616 receiving yards put him at 157 yards all-purpose yards per game: 24.1 more than Zeke. In all, that should put Le’Veon ahead of his competition, especially within the discussion of a “best players” ranking. Bell crushed his franchise’s rushing playoff record not once, but twice, in back-to-back weeks, and had a single-game performance matched only once in NFL history by a player considered the greatest running back ever, the great Jim Brown.

Therefore, I feel that even being ranked 9th on this list is a bit of a slap in the face to a player who is an all around better prospect. He has a larger body of work to show for and can be utilized as a runner and receiver.

If anything, I would’ve preferred that Bell was ranked higher than Antonio. Clearly, the Steelers feel the same way, as they made Bell their team MVP in 2016. It’s unfortunate players from the league’s other 31 teams (if they in fact voted) don’t feel the same way.