What can we learn from the Steelers previous depth charts? | Steel City Underground

The release of the first depth charts of the 2017 season has sent some Steelers fans into a frenzy. I'm here to announce that you may put your panic buttons away (for now) as the initial roster positions have very little bearing on how things shake out when we get to Week 1 of the regular season.

We can learn a few lessons from both the offensive and defensive changes from last season, and how they may apply in 2017. 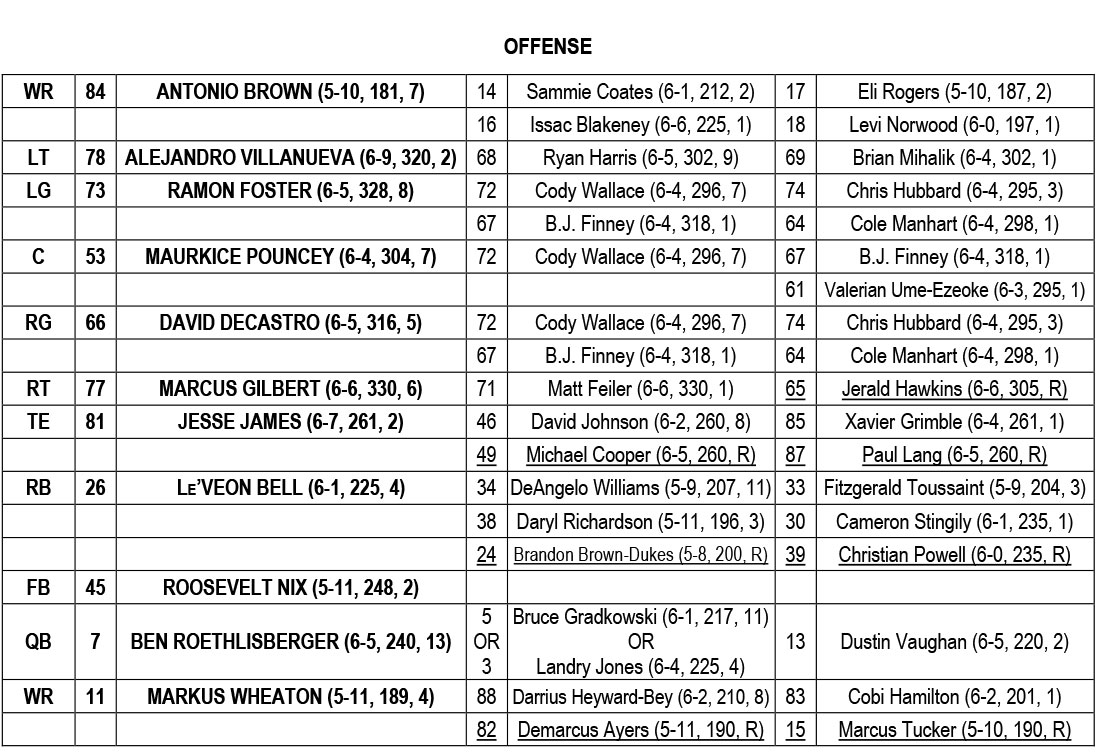 I lied a little about changes: the starters were still mainly starters, but a good portion of the players listed on the early 2016 Steelers depth chart didn't end up playing in the preseason's first game (or several thereafter).

For example, Ben Roethlisberger and Le'Veon Bell were listed as starters, but neither ended up playing against the Lions last season. Of course, Bell was suspended for the first three games to start the 2016 season and was replaced by DeAngelo Williams.

A larger portion of the roster shuffling occurs, of course, when the team dropped from 90 players during the preseason all the way down to 53 when the regular season begins.

Some of the surprises last season included Jesse James starting at tight end. (Ladarius Green, signed in free agency last year, is all but an afterthought now.) David Johnson and Xavier Grimble went from unknowns to making the team.

Chris Hubbard and B.J. Finney made their way onto the final roster when Cody Wallace never recovered from his injuries to play in 2016.

Fans were intrigued to see what Sammie Coates could bring to the team in year two, but it would be Eli Rogers receiving more playing time in the first two weeks of the season (and subsequent other times throughout the year) over those players listed ahead of him.

There was still a QB "controversy" for Ben's backup, as the official Steelers depth chart listed "Bruce Gradkowski OR Landry Jones" as the number two, with Dustin Vaughan as the three (and a longshot to make the roster). Gradkowski would get hurt in the preseason, giving way for Landry to win the job.

New acquired wide receiver Cobi Hamilton also appeared ahead of several others on the depth chart early on but would be signed to the Steelers practice squad to start the season.

Overall, what you saw the Steelers release on Tuesday is a more realistic depth chart for the preseason than what they let on in 2016, leaving Maurkice Pouncey off for B.J. Finney, and of course, Le'Veon Bell and Martavis Bryant, neither of whom are currently practicing. 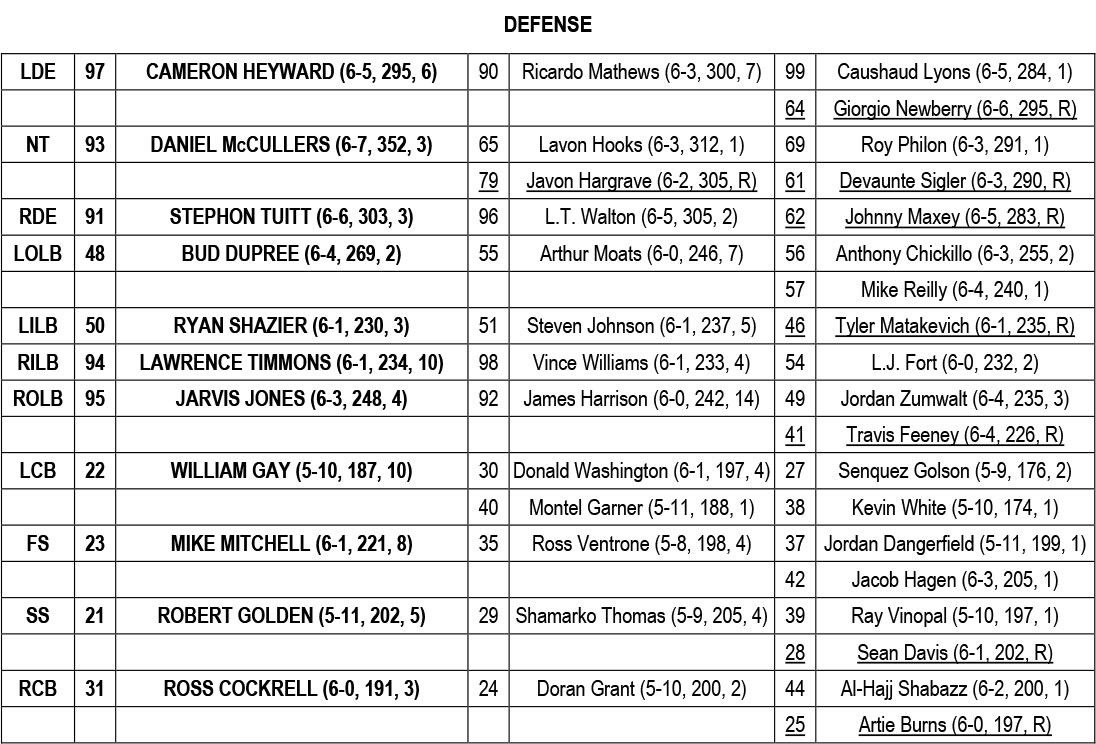 The defensive charts are drastically different. Rookies were given "freshman" treatment, listed near or at the bottom of every position.

Javon Hargrave, the eventual starting nose tackle (and first Steelers rookie to start on the defensive line in over 20 years) was fourth behind Dan McCullers, Lavon Hooks, and Roy Philon: the latter two would not make the active roster.

Ricardo Mathews leaped past L.T. Walton as the primary backup at defensive end. Bud Dupree would be placed on injured reserve and substituted for by Arthur Moats while Jarvis Jones retained his starting status, as did the inside linebackers Lawrence Timmons and Ryan Shazier.

The backups behind those backers shifted some, as Tyler Matakevich was the biggest surprise to make the very first roster, and eventually won a backup spot behind Shazier over Steven Johnson (who was released but then re-signed following Dupree's move to IR).

The secondary was a mess... several veterans tried to squeeze onto the roster early on, including Donald Washington and Montel Garner. The Steelers trade for Justin Gilbert made them expendable, while Senquez Golson was once again injured in camp and failed to play a down in the preseason or regular season.

Two more rookies, Artie Burns and Sean Davis, had to earn their spots as well. Davis competed with Shamarko Thomas, Jacob Hagen, and Ray Vinopal. (The latter two were cut.) Burns, as expected, beat Doran Grant and Al-Hajj Shabazz to make the roster. (Again, the latter two were also cut before the regular season.)

A number of non-participating players were left off of the Steelers initial 2017 roster. Even with their inclusion, it would be easy to see that the organization places an emphasis on making newcomers pay their dues.

Barring injury, we should see more movement over the next few weeks as camp battles and preseason performances shift the landscape of the the remaining roster spots. Otherwise, most of the starters listed currently, will remain in their positions to start the regular season.

Note: specialists such as Chris Boswell and Jordan Berry were not part of this analysis. It's safe to assume those roles will remain the same, again, barring any setbacks.

The only "battle" could be with Antonio Brown fielding punts. Last season, the Week 1 depth chart listed AB "or" Eli Rogers as the punt returner. Brown would eventually assume the role full time following Rogers' injury in Week 3 against the Eagles.

A special series listing the best Steelers players to wear each jersey number from 00 to 99, as voted on ...

Call it “what have you done for me lately?” – there’s a segment of Steelers Nation that believes the organization ...

Joe Kuzma and Zach Metkler preview the opening weekend of the “new” XFL professional football league in the latest edition ...

Joe Kuzma flies solo on the latest Steel City Underground podcast to share some quick reactions about the final weekend ...