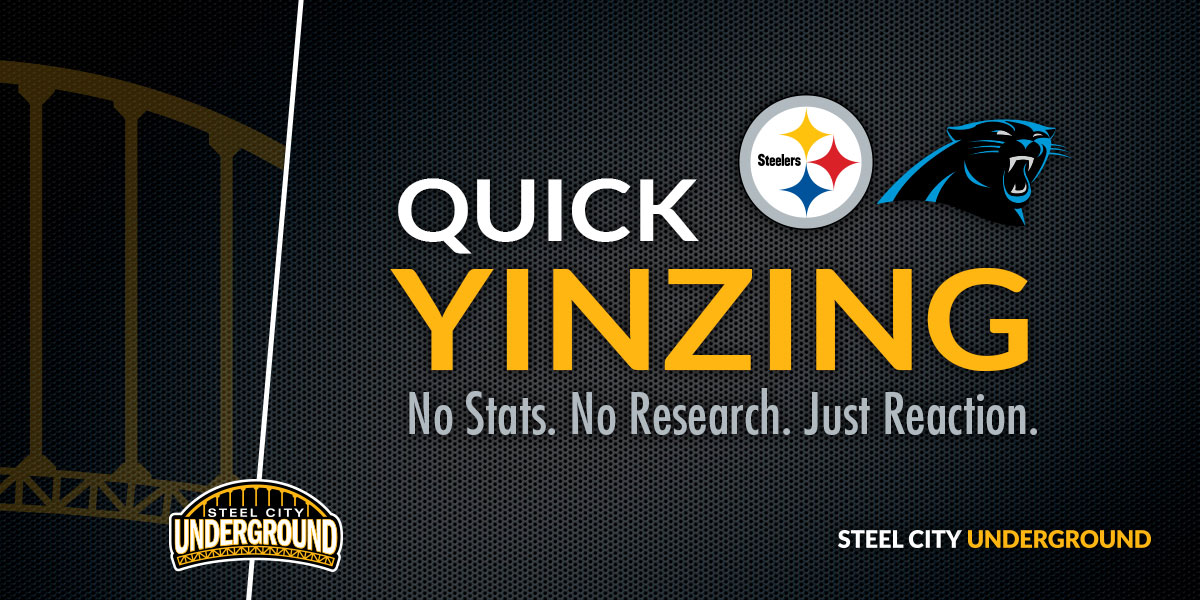 5 takeaways from the Steelers/Panthers preseason game

While the fourth preseason game is traditionally the worst (and it was) we still got some good football out of it and a surprisingly thrilling ending.

Players like Bud Dupree, Josh Dobbs, and Terrell Watson managed to stand out and make plays versus the Carolina Panthers. It wasn’t a great night for everybody though. We saw a muffed punt, fumble, and plenty of missed tackles.

We’ll have more detailed analysis of the game over the next few days, but for now here are some immediate takeaways from the Steelers victory over the Carolina Panthers.

It may have gotten overturned, but Bud Dupree came awfully close to getting a strip sack. What really matters though is the fact that Dupree flashed as a pass rusher and showed his ability to bend the edge.

Dupree has managed to display his improved pass-rushing skills over these past two games, a great indicator that he is bound to have his best year yet.

It’s really hard not to root for Terrell “Nightmare” Watson. The guy is a true power back and more or less a semi-truck on the football field. Each run of his ends with him bowling over defenders and gaining an extra yard or two.

The Steelers have always loved powerful, tough running backs and Watson fits that bill perfectly. Many are hoping he wins the third running back spot over Fitzgerald Toussaint and Knile Davis, and after the preseason he’s had Watson isn’t making that decision for the coaching staff an easy one.

I really was in Trey Williams’ corner. It was easy considering his impressive punt return two weeks ago. However, Williams muffed a punt tonight and affectively sealed his fate.

Another player who shot himself in the foot was Cobi Hamilton, who fumbled the ball near the end of the fourth quarter. His chances to make this team are now zero.

The biggest plays of the night all came from rookie quarterback Josh Dobbs. First on a 58 yard touchdown to Justin Hunter. The receiver didn’t do anything flashy, he simply just toasted the cornerback covering him and caught a great deep ball from Dobbs.

The second came from Dobbs’ game-winning touchdown where he scrambled into the end zone following a 55 yard drive. Say what you want about Dobbs, but there’s no denying his athleticism. The rookie seems to have a knack for making plays and proved he can be clutch.

Not a great night to be a safety

We all need to pray hard for Mike Mitchell to recover. If Robert Golden or any of the Steelers other safties get extended playing time this season, this defense is in trouble.

There’s too many examples to cite, but both Golden and Jacob Hagen failed in coverage on various occasions and missed their fair share of tackles. These guys are best suited for special teams. Get well soon Mike.

Mike Hilton fans (#HiltonHive) were not left disappointed after this game. Hilton racked up another sack tonight, giving him two this preseason.

This wasn’t an easy sack either. Hilton managed to dip past an offensive lineman and hustled to the quarterback who was escaping the pocket. Hilton just keeps making plays and is making a very strong case to make the final roster.