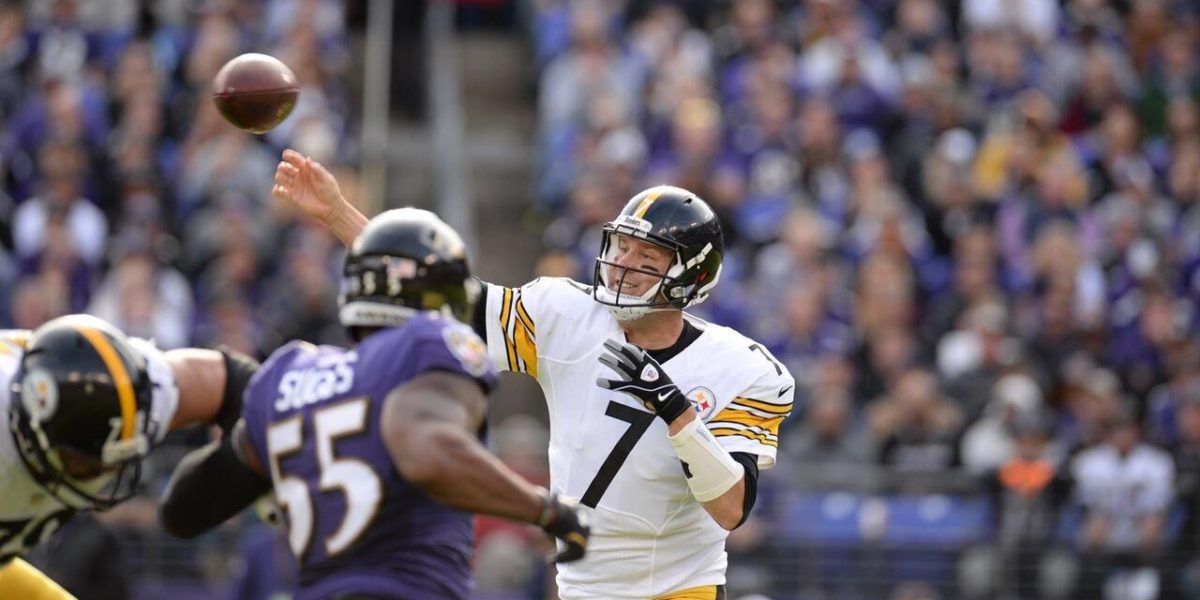 Matchup of the Week: Ben Roethlisberger vs. Terrell Suggs

What battle will be the one to watch on the field each week?

Steel City Underground has you covered with our “Matchup of the Week” series, which highlights one or more key encounters between the Pittsburgh Steelers and their upcoming opponent.

Pittsburgh Steelers quarterback Ben Roethlisberger and Baltimore Ravens linebacker Terrell Suggs are very familiar with each other. Roethlisberger and Suggs entered the NFL within a season of each other and as members of AFC North rival teams, they’ve had the pleasure of seeing each other on the playing field a minimum of twice a year…at least when they’ve both been active on the roster.

Before the 2017 regular season kicked off, all eyes were on these two teams and where they would predictably be ranked. Pittsburgh looked the early favorite to take the division, but Baltimore wasn’t ready to give up even though their roster was being decimated by injuries. Then, through the first two weeks of the season, both teams battled to an early 2-0 record – something that wasn’t expected, at least from analysts looking at the Ravens.

Last weekend, both teams suffered losses. The Steelers blew an opportunity to go unbeaten by allowing a Chicago Bears team to stay in the game and score in the overtime period. Meanwhile, the Ravens went to London and were torn to shreds by a Jacksonville Jaguars team that appeared to find every way possible to expose the areas that analysts had been concerned about in regards to Baltimore all along.

In a locker room press conference this week, Suggs was asked about the loss on Christmas day to Pittsburgh last season – the game where Roethlisberger saved the season and locked up a playoff berth and the AFC North by leading the Steelers down the field on a ten-play, 75-yard drive that resulted in a four-yard touchdown pass to Antonio Brown for the famed lean over the goal line with Ravens draped around him. The ‘Immaculate Reach’ play that was a high for the black and gold and one that haunts the guys in purple.

“Anytime you’re a division rival … it’s going to linger with you for a long time,” Suggs admitted. “The wound is still fresh, so to say, and we’re just looking forward to playing better.”

Suggs has been trying to prepare the younger guys around him for the first meeting with their nemesis, Roethlisberger, this season. He has been trying to push them to get in the weight room, understand the nature of the “biggest rivalry in the NFL”, the physicality of the play between these two teams and the similar mentality and style of hard-nosed football. Respect your enemy and make them respect you.

Suggs has been the rallying force for a Ravens defense that has been shockingly stingy up until their loss to the Jaguars. In the first two weeks of the season, Suggs had seven tackles, 3.0 sacks, two forced fumbles and one pass defended. He was held to just two tackles in London. His best games have been against other AFC North teams thus far and historically Suggs loves to get after Roethlisberger.

Suggs has recorded zero sacks against Pittsburgh since Week 10 of the 2013 NFL season, including the postseason, but he has notoriously caused chaos among the offensive line and created plays that often forced Roethlisberger into situations that were costly in ending drives or turnovers.

When Suggs heard a reporter say that Roethlisberger had been saying the offense in Pittsburgh was struggling because he had to personally play better, he smiled and hummed to himself.

Old Ben…He’s settin’ us up, yeah he’s playin’ mind games…Tell Ben, I’m onto his tricks. I know what he’s doing. I’m not going to let him fool me with trickery and Jedi mind-trick me. – Suggs

Roethlisberger: Take what the defense gives us

Roethlisberger offered his own insights on the game ahead to the media this week while attempting to be reflective on what happened in the overtime loss to Chicago. The Steelers offense has been criticized for being out-of-sync, slow, showing a lack of spark – unless you’re looking at the individual performance of Antonio Brown.

The run game has been abysmal production-wise so far with Le’Veon Bell struggling to get things firing. Roethlisberger said that part of the issue has been the Steelers allowing opposing defenses dictating the pace and forcing long conversions. He admitted that running the ball into a wall wouldn’t be productive but that the offense needs to get creative and help Bell be put into situations that are more favorable.

Roethlisberger placed a lot of blame for the poor offensive performance squarely on his own shoulders and was transparent in saying that he needs to be more patient – with his teammates and in allowing plays to unfold. “Sometimes I find myself almost zoning on AB too much because we’ve got such a good relationship and he’s so good,” Roethlisberger said.

Sometimes I find myself almost zoning on (Brown) too much because we’ve got such a good relationship and he’s so good. Sometimes there’s guys that might be open that I kind of quickly go to AB…I need to reel myself back in and just take what the defense gives us, to give us the best play possible, not just the best guy possible. – Roethlisberger

Both Roethlisberger and Suggs understand that this week’s game is more than just a rivalry match; this week will help set the tempo for both teams as they head into the second quarter of the season. Traditionally, when these two teams play, the score is tight and the spread narrow. That isn’t expected to be any different in their first meeting of the 2017 season.

The two veterans will try to draw strength from their experience against each other to keep their teams motivated and not allow the game to get away from them. They’ll be aggressive and set the tone and whether the two end up literally colliding on the field remains to be seen. Either way, these two players will be utilizing every tool in the box and everything they know about each other to play a mental chess match while they do battle on the field.

Ben Roethlisberger talks about the rivalry in this week's AFC North matchup in Baltimore. pic.twitter.com/V5v1adImOR