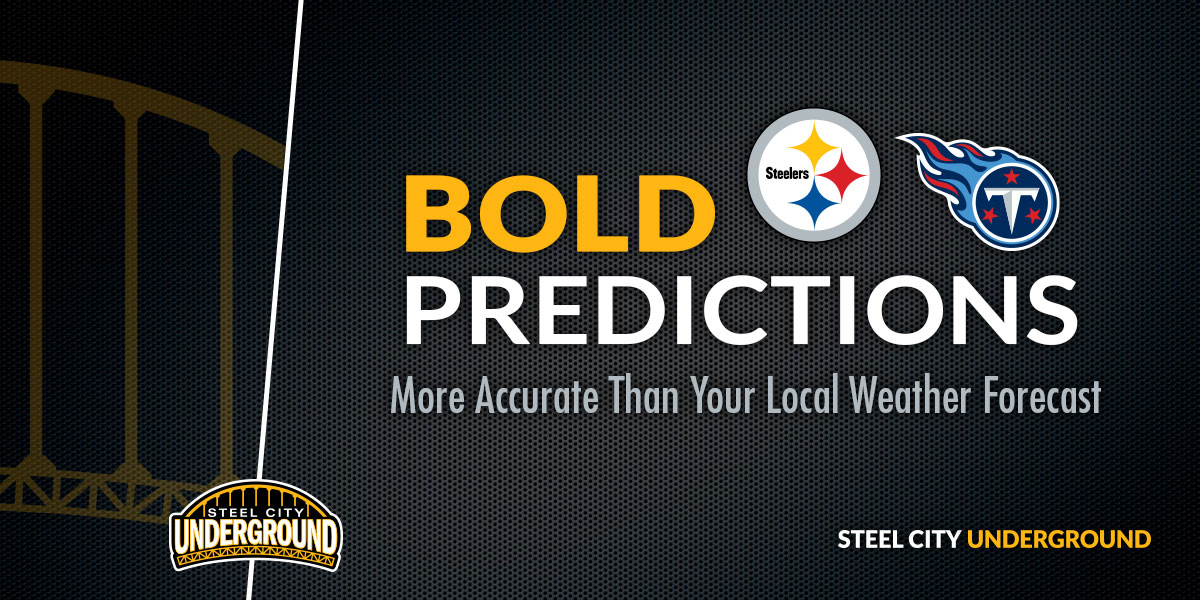 Well, well, well. Lookie who got their prediction mode in full gear!

I keep looking for the Steelers to score 30 points. That didn’t happen on Sunday against the Colts, and my Magic 8 Ball refuses to answer the question anymore. I really want to put it in the predictions below, but ya know, “Reply hazy. Try again later.”

I had also hoped that Ben Roethlisberger would toss three touchdowns. That almost happened… and it almost didn’t! We did see Vance McDonald and Martavis Bryant show up in big moments, so I’ll take those as wins, but my man T.J. Watt needs to start sacking the quarterback some more!

So, the maestro of fortune telling (that would be me) is back to make some more off-the-wall guesses for Thursday Night football. The Steelers return home to face a somewhat surging Tennessee Titans team. Let’s see what I think will happen.

These Thursday Night games tend to be ugly. Incredibly ugly. Penalties, lopsided scores, lots of scoring, or no scoring all highlight the futility of preparing a team for a short week.

It can also be ugly for the Color Rush jerseys (I’m looking at you Seattle) but I love the Steelers all-black kit, so I’ll reserve those comments for other teams.

Hopefully, the ugliness is reserved for the Titans, with a big Steelers win. (Come on 30 points!)

I have to be really bold to name something so rare and attribute it to a player. I believe Sensabaugh has something to prove in more ways than one. The Titans released him during last season and he could be looking for revenge. He also needs to prove that the Steelers made the right move signing him this offseason and that he could’ve been playing in Joe Haden‘s spot all along.

How better does one do that than getting an interception? Better yet, why not take one to the house? Make the ultimate statement Coty, I got your back on this one.

I’m tired of holding my breath as I watch kickers around the league struggle to convert a field goal and extra point attempts.

I’m also tired of holding my breath to see the Steelers fail to score touchdowns in the red zone.

Guess what? That ends on Thursday night! Boz, you might not even get to kick as many PAT tries either! Pittsburgh could try and get this kickstarted by going for two once or twice.

I’m looking at you, James Conner.

Le’Veon Bell had one of his worst games for yards-per-carry on Sunday, and with a short week, can you really run this guy into the ground with just a few days of rest?

Enter Conner, who looked like thunder to Bell’s lightning with his lone carry against the Colts. I think we see more of Conner Thursday; not like 20 carries, but maybe a half dozen, including goal-line work.

That will be good enough for a guy who hits the hole fast to score his first NFL touchdown.

The only question left: is he prepared to celebrate?