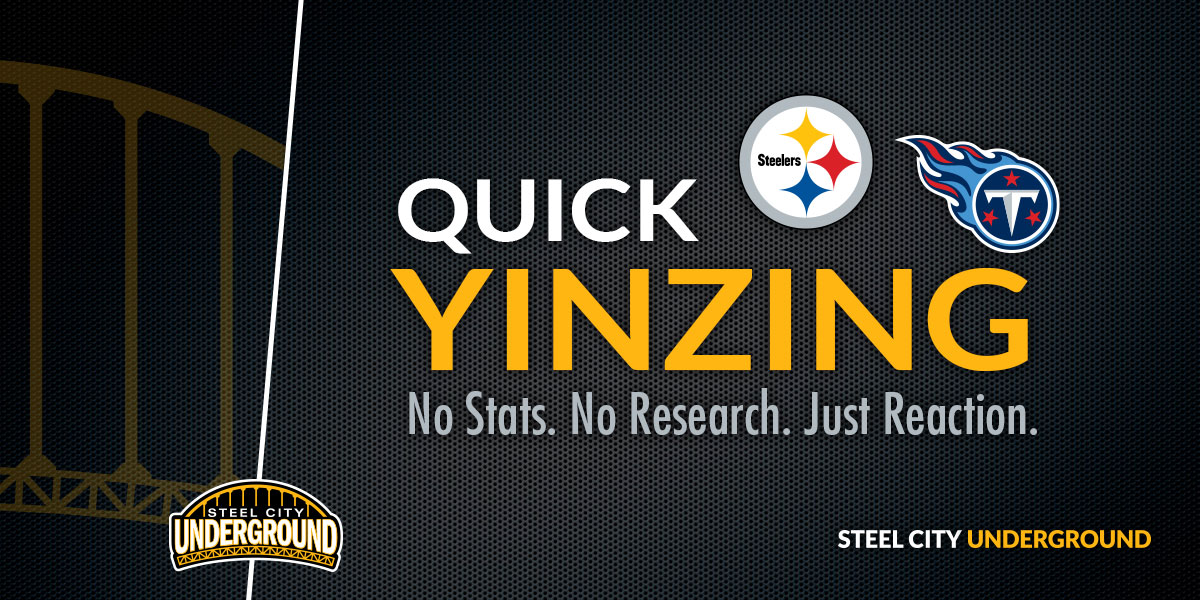 Welcome to “Quick Yinzing”, a fast reaction article where a member of the SCU staff gives their initial post-game impressions without digging into any films, stats, or other analysis. It’s as real as that car ride home or sobering down at the bar following the game!

If you’re a Steelers fan, you’re probably either tossing your ‘Terrible Towel’ around like a windmill, jumping up and down in spite of  the chill in the air at Heinz Field, telling your buddies they owe you a ‘cold one’ or just celebrating the fact that you didn’t have to take blood pressure medication while watching this week’s home game between Pittsburgh and the Tennessee Titans. Even the Steelers fans from Tennessee are ecstatic tonight. To top it all off, run the film back in the fourth quarter and I am pretty certain Ben Roethlisberger even audibled, “Dilly, dilly,” from the line – hand him a cold one, too. Tell me you don’t feel like Vince Williams right now.

The Steelers got the ball first with the Titans opting to kick. It was a costly choice. Coming out early in the no-huddle, up-tempo offense, Roethlisberger found target after target before making a fantastic pass to Antonio Brown in the end zone. It would be just the first of three touchdowns the veteran receiver would have on the night. His best was a one-hand-to-helmet catch for his third score.

Allow him to reintroduce himself.

Speaking of three’s: the Steelers defense didn’t want to get left out so Mike Hilton, Coty Sensabaugh and Robert Golden all grabbed interceptions… and then Sean Davis added another pick off of Marcus Mariota in the fourth quarter for four total on the game. Way to one-up everyone there defensive backfield! That is the most by a Steelers defense in two decades. Not kidding.

The Steelers did a nice job of pressuring Mariota and limiting big rushing plays. They did have a breakdown on defense when Rishard Matthews caught a long pass for a 75-yard touchdown. Mariota was able to thread the ball between the corner and deep safety, but after that, the defense played hard, tough football. And T.J. Watt was the recipient of a very hot hand when he blocked a Ryan Succop field goal attempt.

Cameron Heyward, Stephon Tuitt and Williams all had sacks as the defense was able to penetrate the Titans offensive line.

.@CamHeyward broke a tie with Brett Keisel for sole possession of the 3rd-most sacks by a #Steelers DL since sacks became official in 1982. pic.twitter.com/ehsRR77wNM

Although Le’Veon Bell did not have a runaway game on the ground, he was able to put up decent stats and score a touchdown on the ground. And tight end Jesse James earned himself a touchdown as he stood wide open in the end zone for a nice soft toss from Roethlisberger. Roethlisberger looked more comfortable in front of the home crowd and by the time the third quarter rolled around, the energy coming from the team was electric.

Chris Boswell was perfect on the night in both field goals and point-after attempts.

There has been a lot of talk about the Steelers being unable to score 30 points in a game this season. In primetime, they scored 40 on a Titans team they were evenly matched with. This was a total team win and moves Pittsburgh to 8-2 on the season. Now, go celebrate Steelers Nation!

The #Steelers have scored at least 30 points in a regular season game @heinzfield for the 42nd time since the stadium opened in 2001.